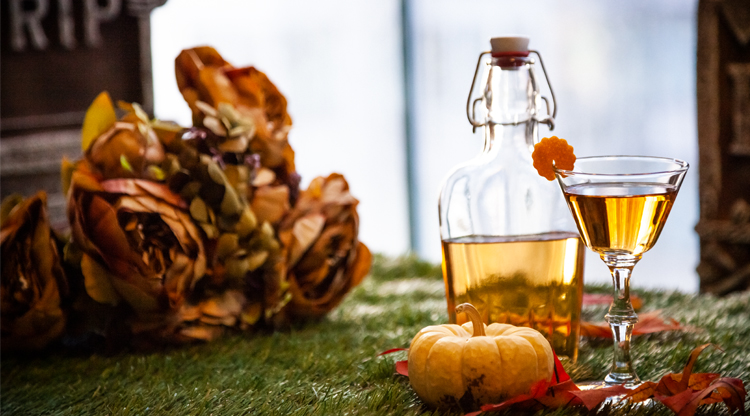 It’s a crisp, fall afternoon. The sun is shining and the air seems full of vigor. It suddenly strikes you as the perfect day for a picnic in the park.

It may not, however, have occurred to you to enjoy your lunch in the bucolic setting of your local cemetery. And yet, a century and a half ago, it would have been the norm. It’s easy these days to take public space for granted, but long before parks were established as intrinsic amenities of urban life, the Garden Cemetery Movement sought to create areas in which nature could act as mediator in an all too common conversation between the living and the dead. High mortality rates naturally led to the need for larger burial spaces set outside the city center, but an eye towards beauty made these open spaces a haven for the community at large. Soon cemeteries became destinations for socializing, exercise, picnicking, and of course, imbibing. Here we offer spirits (of the mixed variety) that could have accompanied a cemetery outing in the movement’s heyday, along with some options for modern audiences currently rediscovering the somber beauty of the “rural” cemetery.

Today the idea of cemeteries as leisure destinations may seem morose, but in the early 1800’s, venturing to one for the day was not only common but fashionable. Until this time, church graveyards provided hyper-local burials, but these resting places were not only becoming increasingly overcrowded, they were also rampant with crime and disease. “Rural” cemeteries were established on the plentiful and less expensive land just outside of the city, accommodating the high death toll while mitigating fear of contamination by devastating diseases such as cholera and typhoid fever.

Cemeteries as public green spaces were already common in Europe, and were seen as benefitting public morale while assuaging the fears and superstitions surrounding death. The movement made its way west in 1831 with the establishment of America’s first “garden of graves” in Cambridge, Massachusetts. Other cities, including New York, quickly followed the example. In 1838, Green-Wood Cemetery in Brooklyn was opened on 478 sprawling acres and by the 1860’s, 500,000 visitors a year—second only to Niagara Falls as the country’s greatest tourist destination—were attracted to its grand architecture, rolling hills, and lush foliage. Carriage rides, sculpture-viewing, hunting and shooting, and discussions devoted to horticultural art were common. Graves associated with famous or notorious deaths attracted even greater numbers. Whether or not families had an intimate connection to the gravesites, picnics near the recently departed were a regular occurrence.

Around this same time, the fancy drink movement that birthed our canon of classic cocktails was well under way, with punch leading the charge. Clarified Milk Punch, in particular, allowed for an elegant tipple that could be made in bulk and was tremendously stable, meaning that it could be stored almost indefinitely without refrigeration, and would have made an easy addition to any picnic basket. Our Pumpkin Milk Punch takes advantage of this convenience while giving a nod to autumn’s arrival. 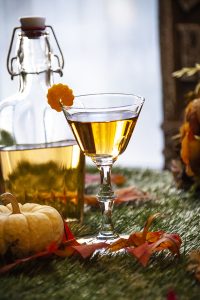 Steep 3 bags of tea in 16 oz of boiling water for 5-8 minutes. The tea should be strong but not too bitter.

Muddle the peels of 3 Oranges and 1 Lime in 2 cups of super-fine sugar. Let sit overnight. Once the oils from the peels have steeped in to the sugar, add 2 cups of freshly-squeezed Orange Juice and whisk until sugar is incorporated. Strain out peels.

Bring Milk, Pumpkin, and Bay Leaf to boil over low heat whisking to thoroughly incorporate. Once hot, add the mixture to the punch and stir lightly, allowing the milk to curdle. Strain twice through a fine-mesh bag. Do not rinse the milk solids from the bag between strains; this will help with clarification. Also avoid pressing the liquid through the bag; pressing will result in un-wanted particles in your final punch. We recommend preparing this punch in large batches since you don’t have to worry about spoilage.

You Can’t Cheat Death, But You Can Bend the Rules…

As leisure-trips to garden cemeteries continued, visitors were even supplied with guidebooks to help them navigate the terrain. These guidebooks often came with an increasing list of rules for proper conduct, and beverages were not always allowed. Never fear—there’s a punch for that, too. In the 1862 cocktail guide, How to Mix Drinks, or the Bon Vivant’s Companion, Jerry Thomas lists a recipe for “Punch Jelly”, which is exactly what it sounds like: punch solidified with gelatin. No pesky liquids here. In our recipe, we stick with the classic punch pairing of Cognac and Jamaican Rum, and opt for agar-agar as our setting agent, because it is vegan-friendly and firms up quickly. One caveat for Punch Jelly; the mild flavor makes it easy to forget its alcoholic content, and as Jerry warns in his book, “many persons…have been tempted to partake so plentifully of it as to render them somewhat unfit for waltzing or quadrilling after supper.” By using a mini-bundt pan for our mold, we create a serving-conscious jelly that consists of exactly two drinks. Simply cut in half and share with a companion. Or enjoy both; one for yourself and one in honor of the departed. 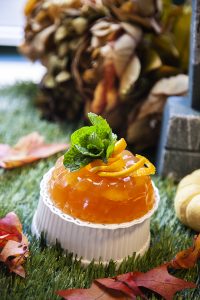 Combine all ingredients and whisk to incorporate. Bring to a boil slowly over low heat and transfer to your non-stick mold or bundt pan. Cool in freezer until firm.

Combine equal parts Prosecco and super-fine sugar. Whisk until incorpotated.This is a great use for left-over bubbles that have lost their verve!

Steep 3 bags of Peppermint Tea in 16 oz of boiling water for 10 minutes. Cool before use.

Encouraging Revival (Of Cemeteries, Not Their Residents)

Ultimately, it was the success of the Rural Cemetery Movement that led to development of the public parks we know today, which, in turn, ensured the decline of cemetery socializing. Legislation for the planning of Central Park was passed in 1853, inspired by the success of Brooklyn’s Green-Wood Cemetery. Plans for Green-Wood’s neighbor, Prospect Park, began in 1865. As decades passed, the grand cemeteries of the Victorian Era began to struggle to survive. Generational gaps between those interred and their living relations led to less visitors, and the romanticized Victorian view of death, inspired by its constant presence, dissipated as life-expectancy increased.

Over the last decade, cemetery administrators have realized that new programming is the key to coaxing visitors—and their money—through the gates. Many cemeteries now offer concerts, cocktail hours, and educational partnerships with local schools. Classes in horticulture, photography, local history, and yoga—to name only a few subjects—appeal to a number of interests, and proceeds aid in maintaining the cemeteries’ extensive grounds and preserving the social and architectural history that resides there.

Certainly, this time of year, as the temperature drops and the leaves change color, no place encourages more focused contemplation of the changing of seasons than a garden cemetery. Whether headed there for an organized event or a long stroll, we highly recommend keeping your bones warm with a hot toddy. This version incorporates a delicate Shochu distilled with a touch of green tea to keep the cocktail light on its feet. Combine everything in a thermos before you embark on your adventure and prepare a few lemon twists wrapped in wet paper towel and nestled in a small bag. As you pour a piping-hot nip, express the bright lemon oil over the top to help enliven the senses and the soul. 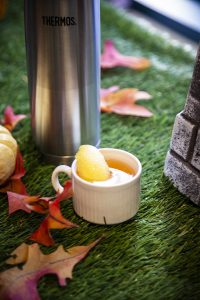 Combine ingredients, stir to incorporate, and pour into a thermos. Make as many servings as your thermos will hold! Garnish each pour with an expressed lemon peel.

The Lasting and The Liminal

Keith Eggener, author of the recent book, Cemeteries, describes burial grounds as liminal spaces, meaning that they exist as a threshold between two states of being. It could be argued that October, itself, is liminal; a month that transitions us from summer to winter. Cocktails can be transitional as well, offering a bit of drinking diplomacy as temperature and sunlight flux from day to day and we make our inevitable march towards the cold months of the year. As you explore the in-between, we offer a liminal interpretation of the classic Manhattan, strong enough to brace the nerves as the days grow short while whispering of summers yet-to-come with a hint of fruit and smoke. 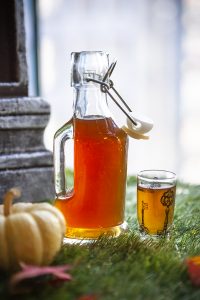 Multiply the recipe by the desired amount of servings and combine all ingredients in a large flask. Adding the water ahead of time will ensure a perfectly-diluted drink, and keeping the flask in the freezer until it’s time for your outing will give you a head-start on maintaining serving temperature. However, sugar has been added modestly to ensure that, even if this cocktail is enjoyed lukewarm, it will remain balanced.

Whether you approach these grand cemeteries with dread or delight, it’s impossible to deny their influence on existing urban spaces. Far from rural now that their respective cities have grown around them, a short trip will take you to the imposing front gates of your local garden of graves, where armed with a fortifying tipple, history waits for you to walk the promenades of old. Cheers and Bon Halloween, Friends.