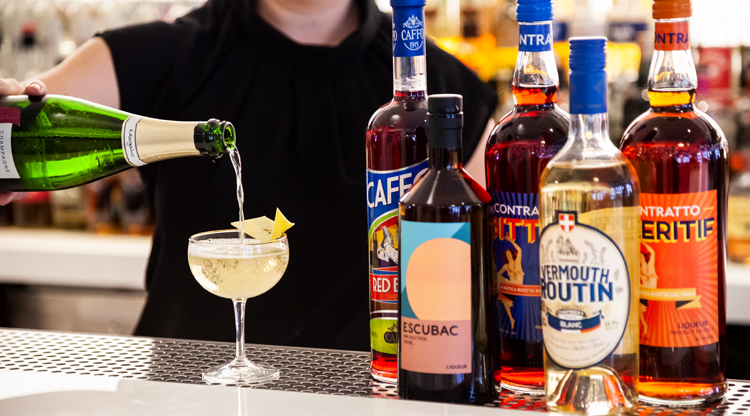 What a great time in history to be able to spritz. Spritz is, indeed, a verb, and one that we’re fond of employing here at Skurnik. The action delivers all that the word implies; not only the promise of a cocktail in hand, but in the making, a setting of intention to refresh oneself with a beverage deceiving in its simplicity but remarkably efficient in its role as a restorative. To spritz is to take a hand in one’s own destiny by stepping—lightly and effervescently—into the world of celebratory living. And it’s ridiculously easy to do.

The classic Venetian Spritz is a cocktail rooted in the enduring Italian culture of drinking just the right thing at just the right time. Speaking more to setting than seasonality, this low-ABV mixture of Italian Bitter, Sparkling Wine, and Club Soda is often enjoyed before a meal in order to stimulate digestion without over-stimulating the drinker (i.e. imbibing one’s way into a nap under the table). Much more than simply a digestive aid, the classic spritz embodies everything most lovely about the Italian ethos of living well, and all with a simple set of instructions:

Combine all ingredients in a rocks or wine glass over ice. Garnish with an Orange Slice and Olive.

Although the well-known Italian aperitivo, Aperol, is most commonly associated with the Spritz, in Italy, the bitter of choice is a decidedly regional affair. (For more on this, we can’t more highly recommend the book Spritz, by Talia Baiocchi and Leslie Pariseau.) The true genius of the Spritz is that its friendly template allows for the easy substitution of a number of styles of bitter and even the addition of supplementary flavors such as liqueurs and higher abv spirits. This is your La Dolce Vita, after all, and you should be allowed to spritz however you want. In fact, so pliable is the Spritz’s build, and so easy to execute, that we at Skurnik have embraced the notion of the Pajama Spritz. Encompassing no one recipe, the Pajama Spritz takes spritzing to the next level by illustrating the notion that whatever your style or level of cocktail expertise, there’s a Spritz to match, just waiting to be enjoyed from the comfort of your own home. Adventurous living is all well and good, but sometimes in order to truly embrace the sweet life, one need go no further than the couch. And with today’s growing number of readily available bitters and liqueurs, dialing in a complementary Spritz is more possible than ever. So perhaps we should amend our original statement: what a great time in history to be able to pajama spritz.

We at Skurnik submit to you the following exercise in pajama spritzing in order to get the creative juices flowing. What follows is a collection of carefully curated icons of style, paired with the spritz that, in our fancy, we imagine would have best accompanied a pajama spritzing day-in-the-life.

Let’s start with the human manifestation of the Italian spirit, the ever-lovely and enticingly sultry Sophia Loren. The actress, who’s prolific career has spanned nearly seven decades, was once quoted as saying, “Nothing makes a woman more beautiful than the belief that she is beautiful.” Judging from her appearance, Sophia Loren must have believed rather ardently, and we can’t help but wonder what role a good spritz had in fortifying her perspective. It’s easy to imagine this siren of the silver screen lounging in a gossamer cocoon of silk and lace, enjoying one of the most classic of spritzes, the Negroni Sbagliato. Substituting sparkling wine for the gin present in a traditional Negroni, this elegantly bitter tipple surely would’ve paired well with the spaghetti she so famously credits with her success. Just mind that red sauce, Sophia – although if anyone could make a napkin tucked into a nightgown look sexy, surely it would be you. 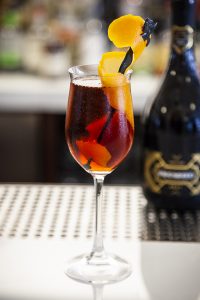 Combine Bitter and Vermouth in a mixing glass and stir with ice. Strain into a chilled Champagne Flute and top with Prosecco. Garnish with an indulgent Orange Peel.

On to a decidedly American icon to show that the Spritz is bigger than the boundaries of any one country. As emblematic as apple pie and baseball, we have the winning smile of American sweetheart Doris Day. The actress starred in a number of famous films, most notably in the 50’s and 60’s, and in keeping with the true pajama spritzing spirit, two of these titles included Pillow Talk and The Pajama Game. Certainly, it’s a small leap to envisioning Doris in a matching pajama suit, taking a break from her bubbly on-screen adventures with bubbly of another kind. In this spritz, we’re aided by a sparkling apple cider produced in the Finger Lakes, and Contratto Aperitif, a lighter take on an Italian Bitter. Honeyed notes of baked apple combine with cinnamon, clove, and orange zest to create a diner-inspired spritz worthy of our best girl, Doris. 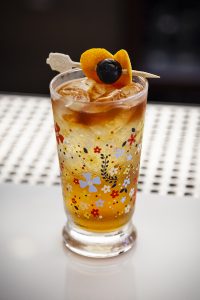 Combine all ingredients in a glass over ice and stir lightly to incorporate. Garnish with a Brandied Cherry and Orange Peel.

Prince (The Purple One)

And now for something completely different.

Few people are ever born with the ability to thrash a guitar, rock an ascot, and make you blush like a schoolgirl, all at the same time. When Prince wasn’t busy purifying himself in the waters of Lake Minnetonka, perhaps he dove into the bracing bubbles of a Spritz. Here we’ve enlisted the help of a small amount of Giffard Blue Curaçao in order to create a purple spritz (of course) when combined with the deep red hue of Caffo Red Bitter. With the addition of a hint of raspberry and a sparkling pear cider from Normandy with a decidedly herbal aroma, we hope that this spritz is something that Prince would’ve happily mixed for his Dearly Beloved. If you’re the kind of person that enjoys lounging in silk pajamas with ruffles at the sleeves, this spritz may be for you. 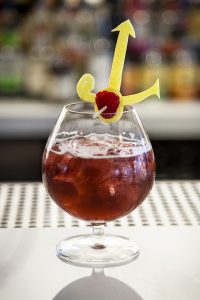 Combine all ingredients over ice in a glass and stir lightly to incorporate. Garnish with a Raspberry and Lemon Peel.

Another musical legend whose creativity was never limited to just one discipline, David Bowie had a tremendous eye for sourcing inspiration from art, pop culture, and literature spanning a number of countries and styles. The personas he created for the stage took on lives of their own, but the man behind these freaky, freaky dreams was a complex and cosmopolitan amalgamation of influences and experiences. Given the time he so famously spent in Berlin, perhaps the use of the German word gestalt is of particular use, because David Bowie’s ingenuity was truly greater than the sum of its parts. In that same spirit, Bowie’s spritz gives strong nods to the sartorial influences upon his work from Japan, and the trilogy of albums he conceived in Germany. Perhaps Bowie never pajama spritzed in a leather leotard or an ice-blue suit, but on the other hand, maybe he did, and this Spritz, like so much of his work, invites indulgence of the imagination. 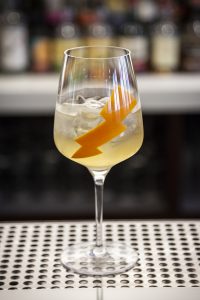 Combine all ingredients in a glass with ice and stir briefly to incorporate. Garnish with a Lightning Bolt Orange Peel.

The definitive “Blonde Bombshell”, Marilyn Monroe, charmed movie audiences in the 50’s with her smart comedic timing. The Seven Year Itch is one of her most famous pictures, and for us, contains some very relevant subject matter. No, we’re not talking about the trials and tribulations of marriage, but something equally as serious: the struggle to stay cool in NYC in the summertime. In between her gastronomic escapades (“Hey,” she exclaims in one scene, “did you ever try dunking a potato chip in champagne? It’s real crazy!”), her primary motivation is figuring out how to get a good night’s sleep without the aid of an air conditioner. Solutions such as sleeping in the bath tub or putting her underwear in the freezer lead us to believe that pajama spritzing for Marilyn (or at least her character in this film) would have been heavy on the spritzing and light on the actual pajamas. And so, what could be more appropriate than a White Negroni Sbagliato made with Champagne? A White Negroni is a gentian-forward take on the classic Negroni, replacing a more traditional red bitter with a bitter French aperitif. In keeping with the style of a Negroni Sbagliato, we’ve replaced gin with sparkling wine – in this instance a dry Champagne to go with those potato chips – and are using Escubac, a coriander-forward botanical liqueur. A French blanc vermouth with a bright, elderflower-driven bitterness completes this crisp cocktail that will certainly take a few degrees off of your internal temperature, or at the very least, make you care a little less about the heat. Just serve this spritz as cold as possible and in a coupe, because proportions – when concerned with glassware, cocktails, or bombshells – can make all the difference. 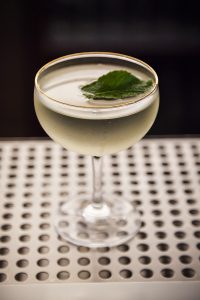 Fan in the Icebox

Combine vermouth and Escubac in a mixing glass and stir with ice. Strain into a chilled coupe and top with Champagne. Garnish with a Lime Peel, expressed and discarded.

The perfect recipe for your own pajama spritzing may vary depending on mood, and by no means, must ever be set in stone. For those times when you’re not inclined to make too many decisions (a state of mind highly encouraged by the pajama spritzing philosophy), an elegant solution is provided by Brooklyn-based amaro and aperitivi producer, St. Agrestis. The St. Agrestis Venetian Spritz is a ready-to-drink spritz made with their house-made Paradiso Aperitivo and sparkling white wine from the Veneto. The entire spritz is carbonated before being put in bottle, resulting in an especially fizzy cocktail. This citrus-forward spritz need only be opened, poured over ice, and garnished with an orange slice. And what’s better, each bottle contains two servings, because the one thing more enjoyable than practicing the art of pajama spritzing, is doing it with company…