Duck into just about any local izakaya pub in Japan, wind through a tight squeeze of boisterous diners, clusters of friends and coworkers reenergizing themselves after a long work day with skewers of grilled yakitori, potato croquettes and platters of local sashimi carefully folded into waves. Sit down, refresh yourself with a hot oshibori towel, if you get handed an English drink menu look at that, or fumble through it with the help of an app or a friendly local. Everyone always starts with an ice-cold lager but since you’re in Japan you want sake! You can’t seem to find the sake selection, because after the selections of beer and the whisky highballs there is just page and page of shochu, in categories you’ve never heard of. Imo, mugi, kome… what is this stuff? You find the sake in the back and your selections are limited to a couple bottles, maybe one or two local favorites and a couple safe bets from big names. Maybe you’ll think… what was up with all that shochu? Wait a minute, why is everyone around me drinking it? What is shochu? 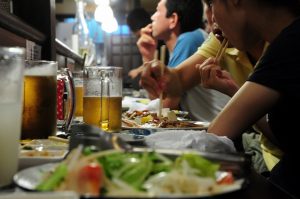 Japan’s native distilled spirit, right now shochu is Japan’s most popular drink after beer, having improbably outpaced sake in terms of overall consumption since 2006, with no signs of turning back. As a point of comparison, there is 3.5 times MORE shochu produced annually than all the tequila produced in a year. The category varies from huge distilleries mass producing simple alcohol mixed in simple cocktails to hundreds of small independent distillers crafting nuanced spirits of haunting complexity.

Part of what makes shochu so appealing is that it is naturally paired with food. While it is hard for many Americans to wrap their heads around, at a mild 25% alcohol when served over ice or with a splash of water it comes down to a food-friendly 16-17%. And with serving sizes smaller than wine knocking back a glass or four with dinner is easy (and will leave you buzzed but able to walk straight…)  While sake sings with lighter fare, for the richer fare like roasted pork belly, grilled chicken, steak or tempura the deep and often nutty flavors of shochu are a beautiful match of flavor without being overpowering.

For centuries shochu was a cultural oddity concentrated mostly on the rural southern island of Kyushu. Kyushu is dotted with a few big cities sitting among vast swaths of farmland and forested mountains, deep and muggy, with a strong and impenetrable local dialect to match. The area has a fierce streak of independence from the rest of the country, with local warlords leading massive rebellions of samurai against the Emperor’s modernizing program in the 19th century. In summation, Kyushu is Japan’s rural south, with a plain-speaking pragmatism that comes from a society made of farmers rooted in far-flung agricultural villages, apart from the merchants of Osaka and Tokyo and the nobility and artisans of Kyoto.

References to shochu (焼酎, literally ‘burnt-alcohol’) appear in Kyushu as early as the 1500s, and while the knowledge moved north the culture of drinking the fiery high proof stuff mostly stayed local to the south. Japan’s native sake is brewed more easily at cooler northern temperatures and is also more susceptible to spoilage in the heat. For these reasons, it’s not surprising that southern Kyushu embraced spirits that could withstand its drippingly hot summers.

While at first shochu was simply rice based sake distilled to make it delicious and stable, as the farmers of Kyushu began to grow more items, they found ways to distill them all into shochu. Barley and sweet potatoes left over after a big harvest couldn’t go to waste so instead of letting them rot they were added to a fermenting batch of sake and then distilled along with them. This became refined over the centuries by local farming families to produce more varied spirits, from light and delicate to rich and powerful.

While traditionally all shochu was made on simple pot stills that kept the rich flavors of the base ingredients pure and at the forefront, as Japan modernized more advanced column stills producing lighter spirits at higher alcohol became more and more common. These lighter (and less expensive) styles were easily mixed into simple cocktails and became widely available and popular around the country.

At this point it’s probably useful to make a few distinctions.  Shochu is easily confused with Korean soju because the words are nearly identical and not surprisingly, come from the same origin as a “burnt-alcohol.” Most soju and certain shochu are still a highly distilled spirit with added flavorings to make the harsh taste a bit more palatable, but we’re most interested in the vibrant and still thriving tradition of honkaku shochu, literally “authentic” shochu, which is a legally defined category with a clear difference from the cheaper stuff.

With legal definitions even stricter than those for sake, honkaku shochu is a revelation if you’ve only tried shots of cheap soju at karaoke. It is much more of a handcrafted item, using traditional equipment and techniques. The makers of honkaku shochu are still mostly descendants of the same farming families that refined shochu making for the past hundred years. While many sake breweries were started by local aristocratic landholding families or prosperous rice merchants, many modern shochu distilleries evolved from farmers who had been distilling their own rice, barley, and sweet potato harvests, and many of them continue to be working farmers today, growing all their own ingredients. Regardless, shochu has deep ties to agriculture, and it is possible to taste differences from region to region and even from farm to farm as the soil subtly changes the qualities of the base ingredients.

As we start looking towards winter and cooler weather there is no drink we’d rather enjoy at the end of the day than a mug of oyu-wari, shochu poured over hot water, releasing aromas of toasted barley and roasted sweet potatoes to envelope our senses.

We are excited to carry a select group of shochu that shows all the variety and quality the category has to offer. Barley shochu can vary from light and delicate like Yanagita ‘Koma’ to full-bodied and roasty like NakaNaka to the buttery and smooth quality of Mizu Barley. Handcrafted rice shochu is well represented by Yamasemi with its herbal aromas and elegant textures. For aficionados, sweet potato shochu shows the most variety and sensitivity to terroir, with Kiroku being a classic medium bodied and spicy example. The sheer variety of sweet potato is well represented on one hand by the deep intoxicating funk of Asahi Mannen to the ethereal and faintly tropical aromas of Toji Junpei.

A great starting point for the novice shochu drinker. Nakanaka is the main brand of barley shochu from the well respected Kuroki Honten distillery. Nakanaka is aged for six months in kame,  traditional clay pots similar to amphorae used for aging shochu. Nakanaka takes a straightforward production approach with 100% barley and traditional atmospheric distillation resulting in a full bodied shochu with distinct notes of chocolate and a rich sweetness on the palate. While excellent served with chilled water or on ice, to truly appreciate the complex aromas and flavors of Nakanaka we recommend to drink it oyuwari (cut with hot water) which unlocks a lot of the subtleties and allow the chocolate notes to linger on the tongue. 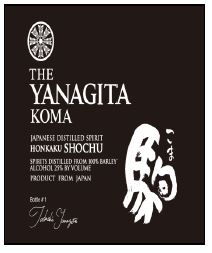 The shochu that kicked off a tidal wave of change in the way Japan drinks. While traditionally produced on a pot still, over fifty years ago the Yanagita Distillery was the first to develop a 100% barley shochu made in a low pressure vacuum still. The smooth and aromatic result is now the most popular shochu style in the world but Yanagita still produces it with considerably more hands on craftsmanship than the mass producers. The result is a refreshing spirit with light grassy notes and a smooth and buttery texture. An ideal base for a highball with soda water and a splash of lemon, simply served with ice, or mixed with yuzu sake for a refreshing, low proof cocktail.

Classic barley shochu style, made from a 400 year old recipe of 67% two-rowed barley and 33% black koji rice. At 35% ABV it is more concentrated like shochus of old, and makes a great alternative to vodka in cocktails, with much more body, richness, and depth. On its own has a floral, sake-like aroma with notes of banana bread and fresh grains. Buttery texture. Drinks like a young whisky with hints of ripe melon and vanilla custard.

A classic rice shochu from Kuroki Honten distillery, Yamasemi is named after Kingfisher birds often spotted along the mountain streams around the distillery. Fermentation is done using a proprietary in-house yeast and natural spring water, and with rice grown on the distillery’s own rice fields.  Aged in traditional kame clay aging pots to create a mellow, smooth and buttery spirit, mildly savory and smoky. Excellent served over ice or with a splash of water, reminiscent of fine sake.

Made from “Kogane Sengan” sweet potatoes grown in the distiller’s own field and from their own  handcrafted black koji. Distilled at normal pressure then aged for three years in kame (large porcelain pots) which draws out a very strong, thick aroma aroma, mellow taste of sweet potato and black tea and a fragrant and complex finish. Mixing with room temperature water enriches the flavor, releasing the sweet, slightly roasted character of the potato. Mixing with hot water mellows the flavor and creates a well-balanced, rounded taste.

A testament to the possibilities of craftsmanship and personality in shochu production. Influenced both by their grandfather’s example and the winemakers of Burgundy the Watanabe brothers seek to create a true terroir-driven spirit, with enough richness and complexity to appeal to the aficionado of fine mezcal, scotch, or bourbon. Deep flavors of roasted sweet potato and walnuts with an appealing finish of nutmeg.

Ethereal and delicate, this is one of the few 100% hand-crafted shochu made today without benefit of modern machinery. Aromas are light and tropical, with subtle notes of candied yams and finishing with an appealing tingle of roasting spices. More fine-grained and pretty than most sweet potato shochu.