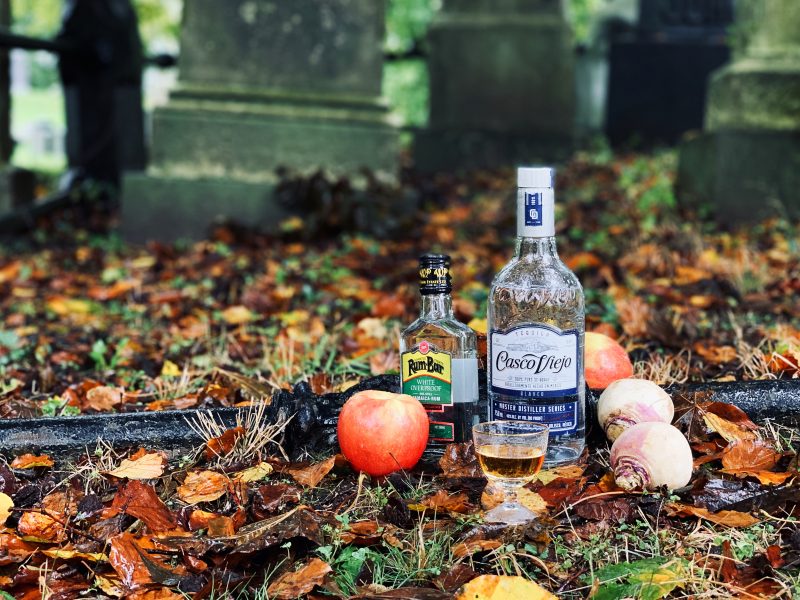 To paraphrase Ray Bradbury, October is a time for autumn people, thinking only autumn thoughts. Perhaps as we find ourselves sticking closer to home this Halloween, the time is right to indulge in some autumnal pondering of the old customs; some that have given birth to modern, American Halloween traditions and those that march on with their own unique observances.

To be sure, though European customs may vary from our own, the themes remain the same: a changing of seasons, celebration of the harvest and its bounty, and a recognition—sometimes joyful, sometimes somber—of a world divided from our own by the thinnest of veils during the time of year defined by shorter days, colder winds, and darker corners.

A cocktail or two, as we reflect upon these shadowy thoughts, would of course be most appropriate.

Toss a Coin to Your Turnip

Pumpkins may now be ubiquitous with American Halloween, but turnips were the original vegetable of choice for Jack o’-lanterns. A quick dive into European traditions will show that these unassuming root vegetables play a big role in fall festivities in more places that you would expect, often carved out and used as lanterns for varying versions of trick-or-treating.

The Irish folklore goes something like this: A man called Stingy Jack invited the Devil out for a drink. He convinced the Devil to turn into a coin with which to fool the innkeeper, but once done, Jack put the coin in his pocket next to a silver cross to keep the Devil from switching back. Though the Devil was eventually freed, Jack managed to avoid retribution for years through a combination of swindling and trickery. When Jack finally died, he was welcome in neither heaven or hell, instead condemned to walk the eternal night with nothing but a carved-out turnip holding a burning coal to light the way. People began carving their own effigies of “Jack of the Lantern” to guide revelers during Samhain.

If you’ve never tried (and why would you), carving a turnip is hard. It’s no wonder that the vegetable was dismissed in favor of the much more manageable pumpkin when Irish settlers brought their Jack o’-lantern traditions to the US.

This nod to the turnip captures the essence of the vegetable’s subtle, sweet earthiness and radish-like spice in a cocktail akin in flavor to a White Negroni: 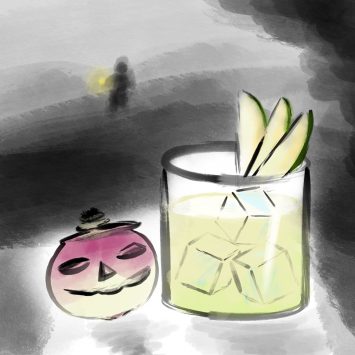 Combine ingredients in a mixing glass and stir with ice. Strain into a rocks glass over ice and garnish with a fan of apple slices. Accompanying turnip lantern optional.

In Celtic mythology, apples play a major role, associated with healing, prosperity, and rebirth. This can be seen in the practice of burying apples in graves as food for the dead; tombs have been found to hold petrified remains of apples dating back thousands of years. Apples were featured prominently in soothsaying traditions and games including bobbing for apples and predicting one’s future spouse. Eligible stags would peel an apple in one long strip, toss it over their shoulder and its shape was said to form the first letter of their future spouse’s name.

In addition to apples, hazelnuts were a salient artifact in Celtic legend as Hazel trees were believed to be at the center of the Otherworld. This sacred nut represented divine wisdom, and chopping down a hazel tree was considered extremely bad luck. Like apples, hazelnuts were said to portend one’s love life. During Samhain, aspirational lovers would roast two hazelnuts near a fire; one representing the person roasting it, the other the person they desired. If the nuts jumped away from the fire, it was a fatalistic sign. However, if the nuts roasted without disturbance it indicated a good love match.

The mildest whisper of peat alerts your senses to this drink’s Celtic roots. Balanced by savory nuttiness, citrus, and crisp fall, orchard notes, the Crypt Kicker Five is a nod to the crunchy leaves of autumn and the mystery of what lies in the colder months ahead: 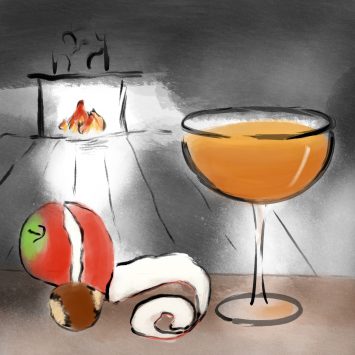 Combine ingredients in a mixing tin and shake with ice. Strain into a coupe. Drink and look over your right shoulder to see what awaits.

It’s perhaps no wonder that a time of year associated with harvest and death is inextricably linked to a desire to know one’s future. Here’s another example:

The Celtic celebration of Hop-tu-Naa, on the Isle of Man, includes a bit of trick-or-treating, a bit of dancing, and a lot of divination. In a practice called Soddag Valloo, for instance, the ladies of a household all participate in making a three-cornered cake comprised of flour, eggs, eggshells, soot and salt. Near midnight, each lady eats a piece of the cake and then walks backwards to bed. All parts of this process must be observed in complete silence. Only then might the lady hope to see her future intended whilst dreaming, where he or she will appear and offer the sleeper a drink of water.

The traditional cake is not meant to taste particularly good. But if magic is anything like baking, perhaps there’s a bit of room for interpretation with this slightly smoky flip with honeyed pastry notes: 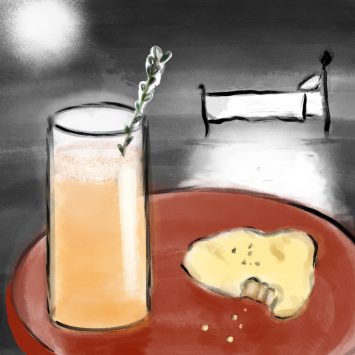 Let No Man Steal Your Thyme

Near midnight, combine ingredients in a mixing tin and shake without ice to incorporate. Shake vigorously with ice and strain into a fizz glass. Garnish with a sprig of fresh thyme. Once drunk, proceed immediately to bed.

A Hill There Is…

Not every tradition has made its way to the New World. In the instance of the old Norse celebration of Álfablót, details are a bit hazy even in its native Iceland. Celebrated between autumn and winter, when the spirits of the dead were believed to be at their strongest, the practices of Álfablót were meant to be specific to a given household and were quite secret; guests during this time were explicitly unwelcome. The ritual does seem to have involved a “sacrifice to the elves”—elves in this instance meaning the spirits of ancestors. The sacrifices occurred on top of burial mounds, where interaction between the living and the dead was thought to be most active.

In hardcore Viking fashion, the sacrifice of at least one goat was probably de rigueur for Álfablót, but this cocktail goes a lighter route by simply sacrificing a few carrots, and the only spirits you’ll find beneath this mound (of ice) are brandy and Icelandic aquavit: 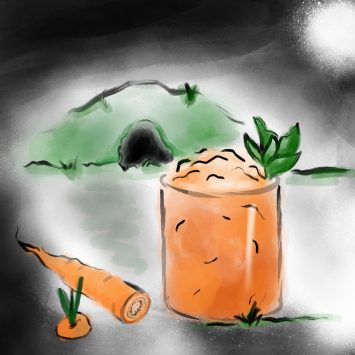 Combine all ingredients and shake briefly with ice. Strain over crushed ice in a rocks glass. Top with more crushed ice and garnish with grated nutmeg and mint. Make one for yourself and one for the elves, but don’t tell anyone about it.

‘Tis a Road! (to New Traditions)

Traditions must start somewhere, and that doesn’t have to be in the old country. For many, movies are a key component of Halloween festivities, and you’ll find few viewing lists that don’t include the 1993 classic, Hocus Pocus. (Did you know that a sequel starring the original cast of Bette Midler, Sarah Jessica Parker, and Kathy Najimy is currently in pre-production?! Virgins, beware!)

This cocktail, inspired by the film, receives an added bit of complexity from Rooibos tea, made from a bush which grows in a broom-like fashion. A mixture guaranteed to ensorcell any drinker: 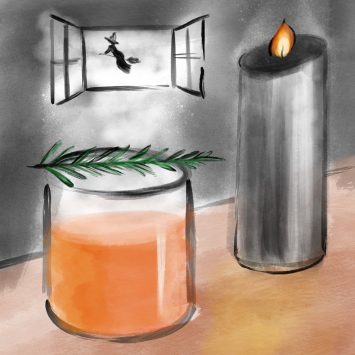 In a mixing tin, combine mint leaves and cane syrup, muddling lightly to release the mint’s oils. Add the remaining ingredients and shake vigorously with ice. Double-strain into a rocks glass but serve neat. Garnish with a Rosemary Sprig. Avoid black candles. 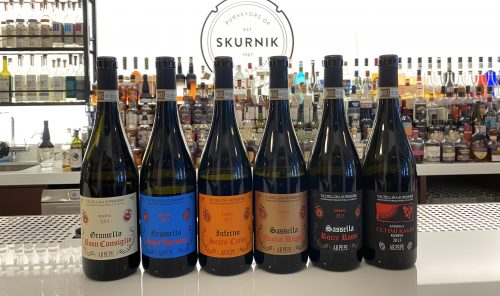 ARPEPE 2013 Riservas: The Making of a Legend
The decision is not taken lightly, as the Pelizzatti-Perego siblings wrestle with the knowledge that their wines must live up to their forebears’ standards: Did the season find a balance between sunshine and rain? Did disease or hail take a...
Read More