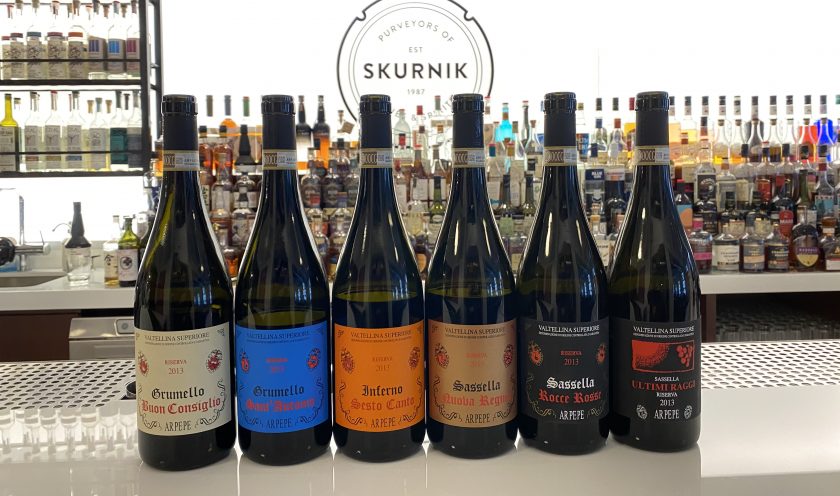 Only three or four times in a decade are conditions so perfect in Valtellina that the wines from ARPEPE’s single vineyards bare their vaunted Riserva labels.

The decision is not taken lightly, as the Pelizzatti-Perego siblings wrestle with the knowledge that their wines must live up to their forebears’ standards: Did the season find a balance between sunshine and rain? Did disease or hail take a part of the crop? Were the diurnal temperature swings appropriate in the critical months of maturation? While they can always change their minds during vinification, once in bottle, the wines must take their place in the history of the estate! 2013 was one of these years.

A brief primer on what to expect from the Alpine Nebbiolo of Lombardia in 2013 from Isabella Pelizzatti Perego:

2013 has been a beautiful classical vintage and picking time for Riserva grapes was quite late. We harvested at the end October/beginning of November. All the 2013s are very balanced with 13% alcohol, and only the late harvest Ultimi Raggi is 13.5% alcohol. What’s more, they are still very young, full of freshness and potential for aging. The distinctive characters in between the different CRUs are the same as in other vintages, but with the distinctive personality new vintage 2013.

2013 is also the first Riserva vintage that we were legally allowed to close all our wines with Nomacorc Reserva, which is made with a plant-derived polymer of sugar cane, with even more control over the entrance of oxygen. We’re very happy to have no more cork issues and with no other deviations!

The wines of the Langhe and the Valtellina may be cousins, but they are quite different. Langhe wines take advantage of their Mediterranean climate: they are warmer in general, and typically from more rich, clayey, fertile soils. Tucked into the Alps, Valtellina, on the other hand, is solidly a continental climate. The soil is morainic in origin with a lot of sand and very little organic matter. The resulting wines are more delicate and floral, with a huge kick of minerality and saltiness. Isabella feels they are easy to pair with the cuisine of her region: hearty pizzoccheri pasta (buckwheat noodles served with cabbage, potatoes and bitto cheese) or even fish like perch from Lake Como. She says,

Valtellina offers a lot of freedom to pair with food because the wines aren’t as imposing as wines from Langa. And their ethereal nature makes them show as if they were younger wines compared to Barolo/Barbaresco over time.

The dining table begs for these alpine wines, and the Riservas of 2013 are a wonderful opportunity to explore the virtues of this truly great vintage.

In the order the estate recommends we serve them:

The Grumello subzone is east of Sondrio and takes its name from the castle that looms above the vineyards. Geographically between Inferno and Sassella, Grumello is the most immediately accessible wine and is easy to understand for people who aren’t familiar with Alpine Nebbiolo. Here you’ll find three hectares of ARPEPE’s vineyards as well as their cellars. Grumello might be considered by some “Valtellina for beginners,” but don’t let that fool you into thinking the wines are simple. They are typically more open on the nose and gentle on the palate. 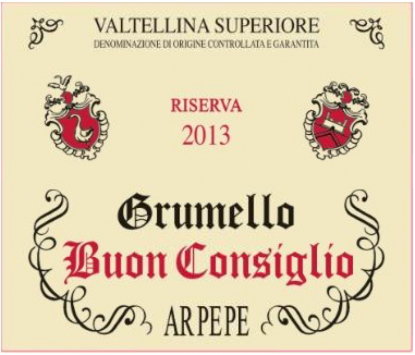 Isabella says “Buon Consiglio is always the most gentle and delicate, the most prompt and expressive of the crus from the very beginning.” The name comes from a religious kiosk with a painting of the Madonna del Buon Consiglio nearby. The vineyard is directly above the historical cellars of ARPEPE in Via Buon Consiglio, located 350 to 400 meters above sea level. In the vintages where the wines are more ready to drink, the estate produces the Grumello Rocca de Piro from this site. 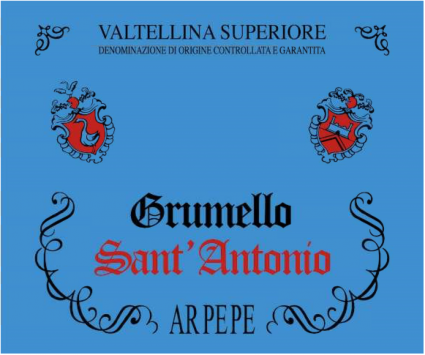 These vineyards are nearby the Sant’Antonio church in Montagna, where Arturo Pelizzatti Perego married his wife Giovanna in 1969. In the best vintages, Grumello Riserva Sant’Antonio is produced, and in vintages when the wines are more prompt, the grapes go into Grumello Rocca De Piro.

We like to show [Sant’Antonio] side by side with [Buon Consiglio] to properly show the differences, this showing power and strength, with more prominent tannins and deeper color.Isabella Pelizzatti Perego

As the name implies, this is a warmer subzone. There is more organic matter in the soil in Inferno, as well as rocks that reflect the sunshine. Occasionally you feel the warmth in the wine itself, with a slightly higher concentration of balsamic notes. 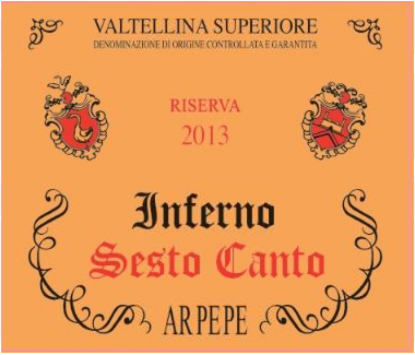 The estate’s only holding in the Inferno subzone, the grapes here produce the Sesto Canto bottling in exceptional years or are otherwise destined to the Fiamme Antiche when they decide not to produce Riserva. From a single hectare of fifty-year-old vines, with deeper, rockier soil, this wine always has “a more evident balsamic profile, powerful and fresh at the same time.Isabella Pelizzatti Perego

The Sassella subzone is to the west of Sondrio, and ARPEPE has 9 hectares here. This area has the most iron in the soils and makes powerful, high-toned wines that show their depth in minerality. In vintages that don’t make the cut for Riserva, the grapes go into the Sassella Stella Retica. 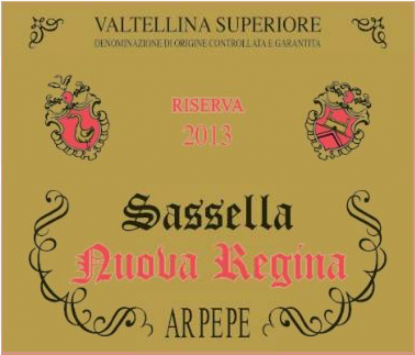 1998 was the first vintage for this single hectare parcel that’s perched 450-550 meters above sea level and has a good concentration of ARPEPE’s oldest vines. There seems to be more rocks than soil in this cru, and the wine is decidedly aromatic with extreme minerality and purity. Isabella says it shows “gentleness and strength as a real queen.” 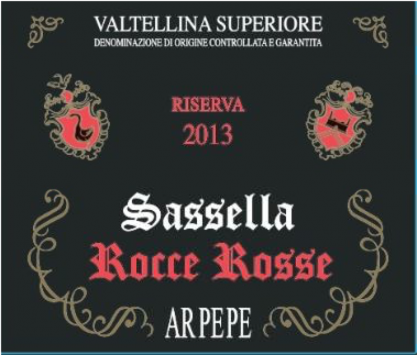 This wine is the most historic of the lineup, as it was the very first wine produced when Arturo reformed his family winery under the ARPEPE label with the 1984 vintage. While Rocce Rosse is ARPEPE’s largest cru, the grapes come only from the higher part, perched at 400-500 meters above sea level, where the soil is very thin and rocky with a lot of iron. 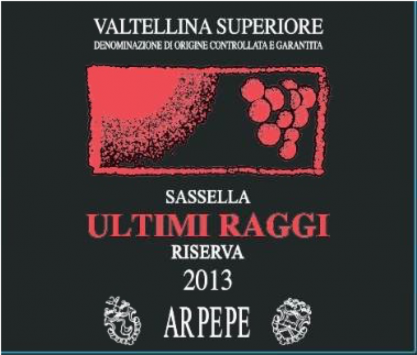 Not drying grapes in the “fruttaio” sounds rather odd to red wine lovers in this land, but if one is to remain true to one’s vision, one may indeed appear to be odd at times.

This wine, born in 1999 from Arturo’s vision, plays on the slight drying of the grapes in the vineyards, up to 600 meters above sea level, at the highest point of Sassella in the zone called Ere. The right waiting time to reach the perfect degree of phenolic ripening of the grapes can take some weeks later than in the vineyards below. The variations in temperature between day and night during the harvest add strength to the skins and concentrate the sugars. The fruit slowly dries in the wind, while still attached to the vine as it prepares for its winter rest. Just before the snow comes, between the middle and end of November, the grapes are picked, gently crushed and pressed in a wooden vat.

At the first racking, the wine is completely dry and acidity levels are quite pronounced. The ripeness mitigates the nervous tannins of the wine that is characteristic of this zone, and aging in large barrels smooths out its rich texture. The sweetness of the ripe fruit thus lingers in the fragrance, without being cloying on the palate. After aging in the bottle, Ultimi Raggi becomes the wine with the highest alcohol content of our production, while losing none of the freshness and mouthfeel of Nebbiolo from the Alps.Isabella Pelizzatti Perego 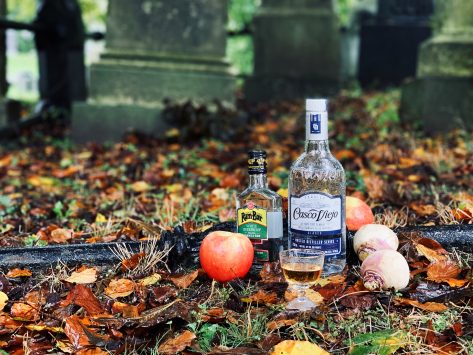 Halloween Tales and Tipples
To paraphrase Ray Bradbury, October is a time for autumn people, thinking only autumn thoughts. Perhaps as we find ourselves sticking closer to home this Halloween, the time is right to indulge in some autumnal pondering of the old customs;...
Read More 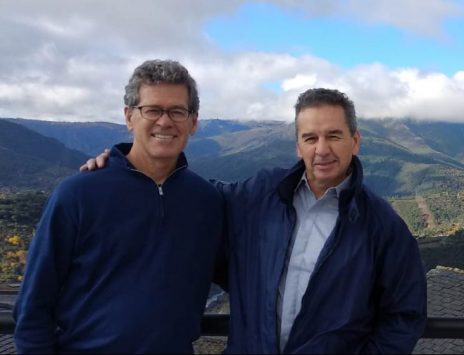 Alvaredos-Hobbs: Paul Hobbs Turns to Galicia
THE PROJECT In 2014, acclaimed vintner Paul Hobbs was introduced to Antonio López, a Galician-American with family roots in the tiny village of Alvaredos (population: 13 families) in the Ribeira Sacra. His family had owned vineyards there since the late...
Read More