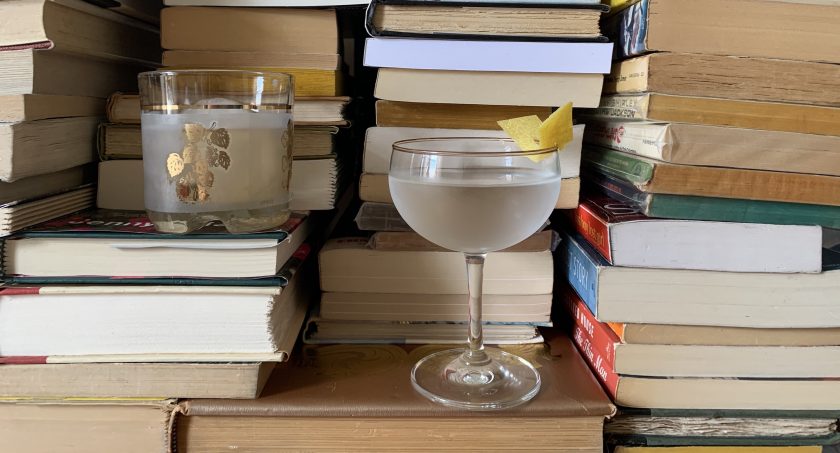 This Sunday marks National Book Lover’s Day, and certainly, the last few months have proven how valuable a good book can be in inspiring, educating, or simply entertaining during tough times. In the world of hospitality, nothing shows appreciation quite like a lovingly constructed cocktail, so here are a few tipples inspired by the current reads of some of our Skurnik staff and friends:

Inherent Vice might be Pynchon’s most accessible work, and certainly one of his funniest.  Following private dick and public stoner Doc Sportello through 1970s Los Angeles, things are rarely what they seem amid the last gasps of the free love movement. This take on my favorite summertime sipper is inspired by Doc’s dedication to the two sides of every story, often best revealed in altered states. 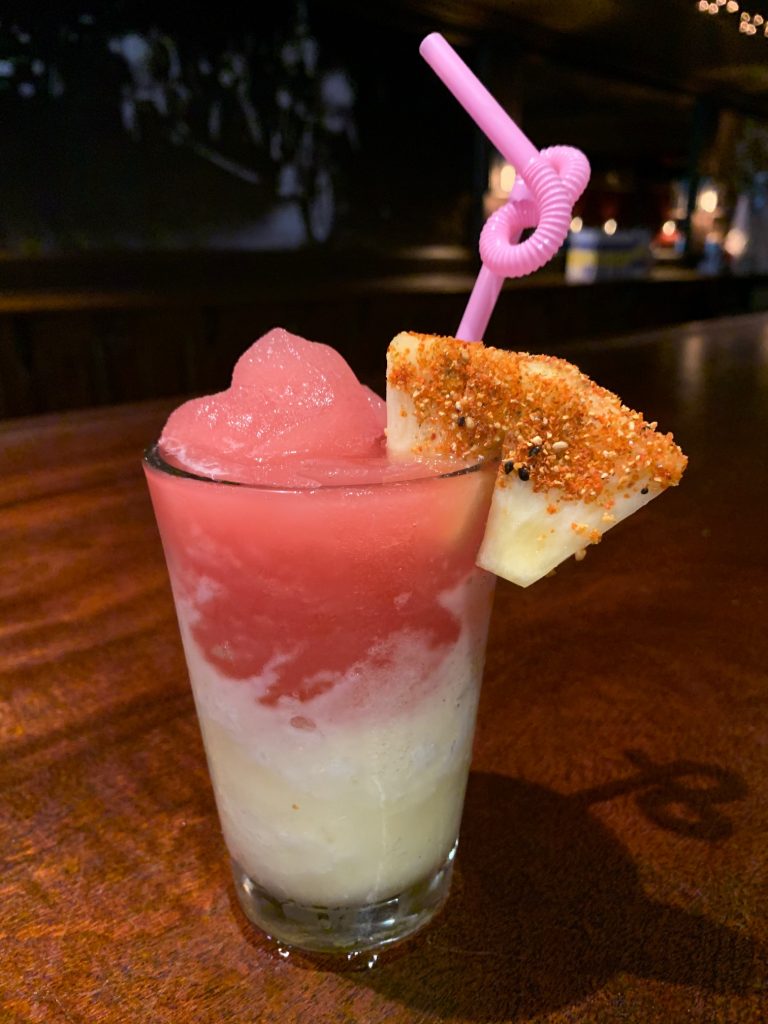 Combine all ingredients in a blender with 1/4 cup of ice and blend until frothy.

Combine all ingredients in a blender with 1/4 cup of ice and blend until smooth.

Fill your glasses halfway with Pina Colada, then fill the remainder with Strawberry Daiquiri.  Add a float of Lemon Hart 151 if you’re feeling frisky. Garnish with a pineapple wedge dipped in Tajin.

First published in 1997, Harry Potter became an instant phenomenon among readers of young adult fiction and was responsible for getting an entire generation to actually pick up a book. Now, in 2020, it’s still surprisingly relevant and timely.

J.K. Rowling’s novels stand the test of time and span age demographics. I thoroughly enjoyed them and learned a little about humankind, the consistency of sticky issues like equality and bias, and that the English say “disorientated” rather than disoriented! To top it all off you can look cool while talking to kids about squibs, thestrals, and animagi, and do it all while sipping this version of Hogwarts student’s favorite beverage; butterbeer. Add ice cream and make a butterbeer float!

Combine in a highball over ice and top with club soda. Stir briefly to incorporate.

*To enjoy as a float, sub out the ice for 2 scoops of Talenti Sea Salt Caramel Ice Cream

This is a very unbeery version of butterbeer as I was really going for a brown butter caramel flavor more than anything, hence the rich El Dorado 12 Yr, soft and floral Penderyn, and creamy Giffard Vanille de Madagascar. 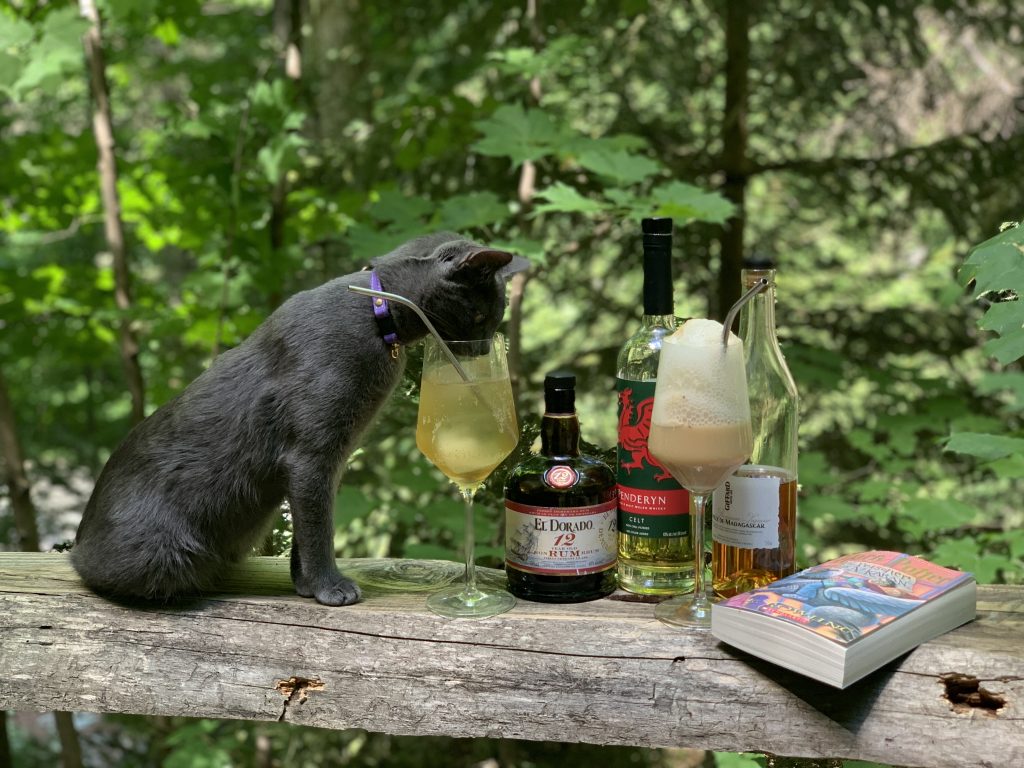 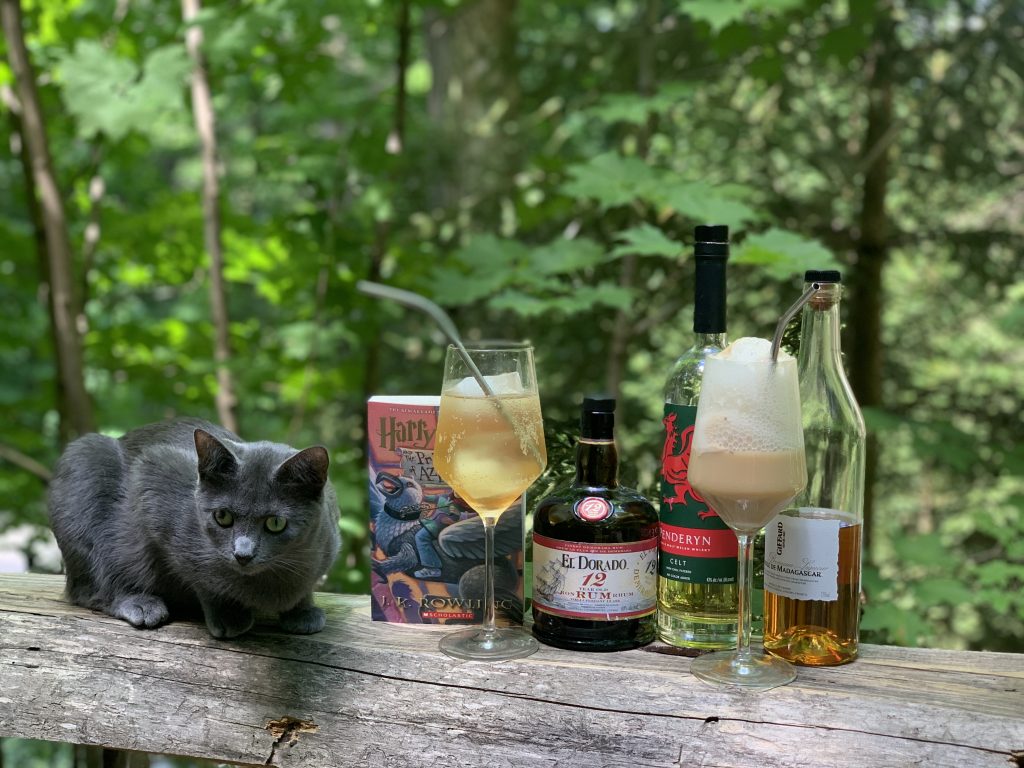 BOOK: A Brief History of Seven Killings by Marlon James

Much like the massive cast of disparate and colorful characters in the Booker Prize-winning novel, A Brief History of Seven Killings, this cocktail will have elements of fire, flash, bitterness, mellowness, sassiness, and so much depth you’ll wonder if you’ll ever be able to pull yourself out.

A suitably complex cocktail worthy of savoring alongside this sprawling epic encompassing the assassination attempt of Bob Marley in mid-70s Jamaica through the drug trade in 80s Miami and 90s NYC.

Pick one of the following rums:

Toss all the booze into a rocks glass filled with ice cubes (or one large ice cube or sphere). Stir quickly for 10 seconds; you’re not trying to dilute it too much, just want to chill everything down and get these big personalities all comfy with each other.

Take an orange peel (trim it all pretty if you like), express those oils right over the top, and drop it in. No need to rush through this drink- that big rum base should give you enough proof for a nice long reading session with Marlon James. 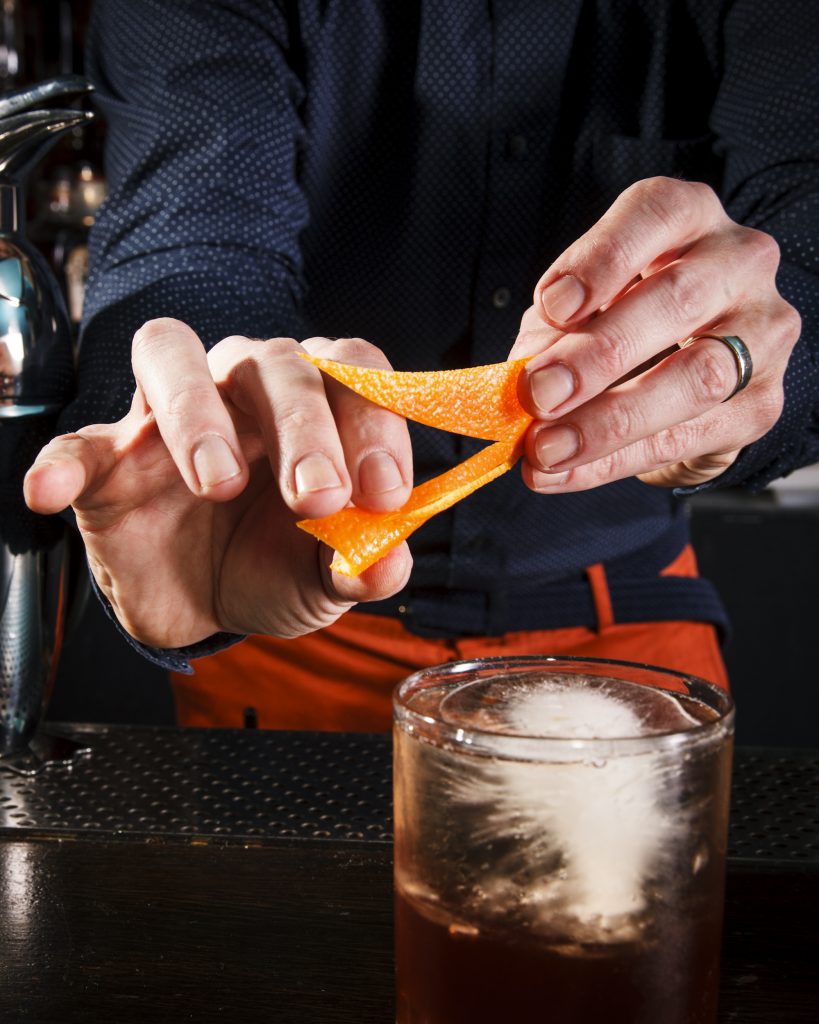 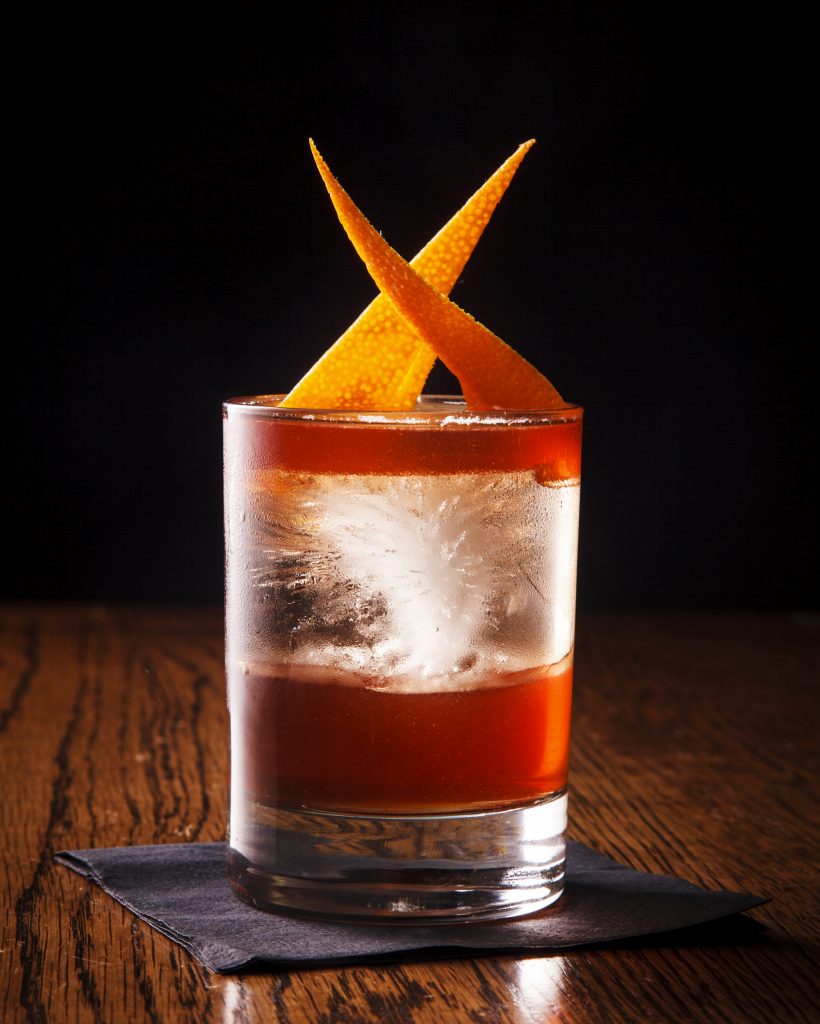 Renee Gladman is one of my favorite writers; a poet, novelist, essayist, and artist, her prose straddles abstraction and narrative with humor and beauty. Houses of Ravicka is an indescribable blend of sci-fi, mystery and poetry.

A frustrated comptroller, navigating a broken heart, goes searching for a missing house which refuses to be where it should. Meanwhile, the inhabitant of an invisible house on the other side of town meditates on the life of the city and its inhabitants. There are enough mysterious and fantastic elements that the book is absolutely riveting; but the text itself, just like the houses it describes, remains ethereal, always slightly out of reach, impossible to pin down. That elusive quality, which borders on a kind of intellectual eroticism, is something I often find in great anise-driven spirits like pastis and absinthe.

It is particularly at work in our recent arrival, Golden Arak Ramallah. At a potent 100-proof, it hits as hard as any other base spirit may, but mixed here with bitter grapefruit and pomegranate, the attack of the anise dances away behind a cloudy veil of fruit. The drink, like the book, is provocative and confounding, hard to wrap your head around but even harder to put down. 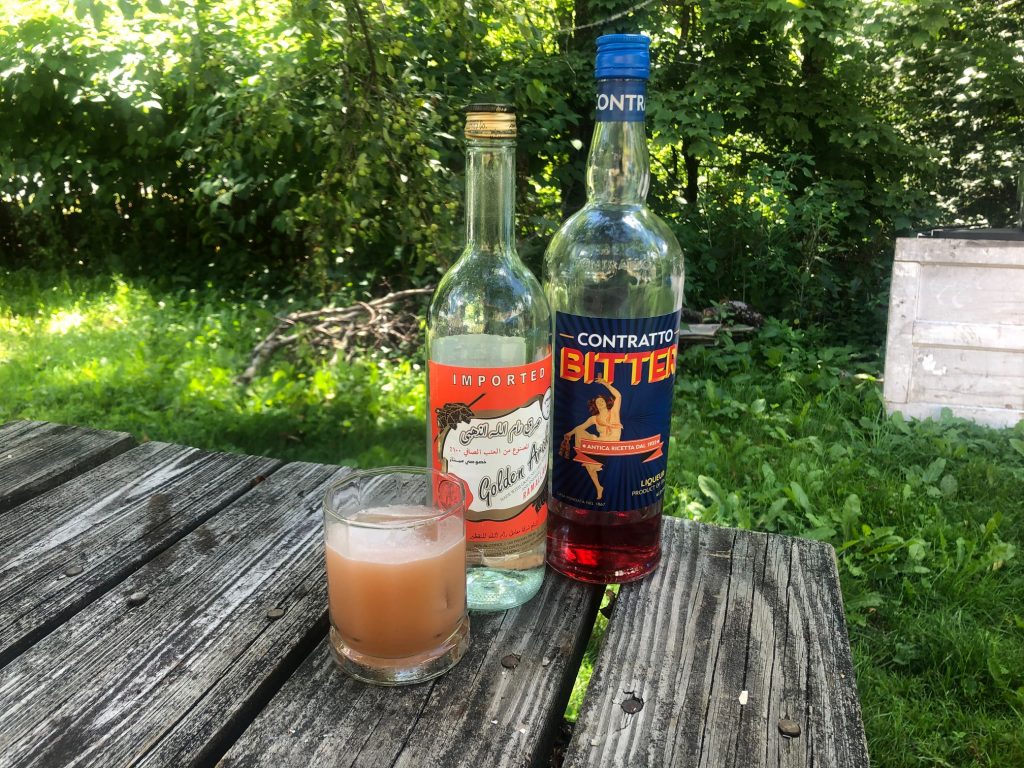 Combine ingredients in a mixing tin and shake with ice. Strain into a rocks glass over a big rock.

I have a tremendous soft spot for early Stephen King.  Like many, however, I do feel that the movie adaptations tend to lose a bit of the tension and fear King so masterfully evokes in prose, and I’m always delighted by how much I end up loving the origin books after thinking I knew these stories thoroughly from the films.

One of the silver linings of sheltering in place is that I’ve had the opportunity to read some of the books in my vintage paperback collection that I would never dare take out into the world in my daily commutes; they’re simply too delicate to stand the wear and tear. But there’s something about having a copy in hand that displays the amazing early cover art, the occasional typo— long since corrected—and seeing things like HBO referred to in full as “Home Box Office” (because it was so new!) while reading those words on a page that was printed in 1981. If the story isn’t already escapism at its best, the vehicle itself completes the spell.

Firestarter, simply put, is a story about a father and daughter on the run. They also happen to have superpowers, the side effect of a drug experiment in which the participants were just looking for an extra buck and the government wasn’t being entirely forthcoming. Tale as old as time, no? But watch what you wish for, Big Brother, because our young ingenue, Charlie, is a sweet kid, but has genetically morphed into someone that can melt steel, stone, and even people with her brain if pushed too far. The fantastical elements of this book serve as a platform for themes of trust, personal identity and acceptance, and the complicated bonds between family that don’t need a mysterious serum called Lot 6 to feel real. 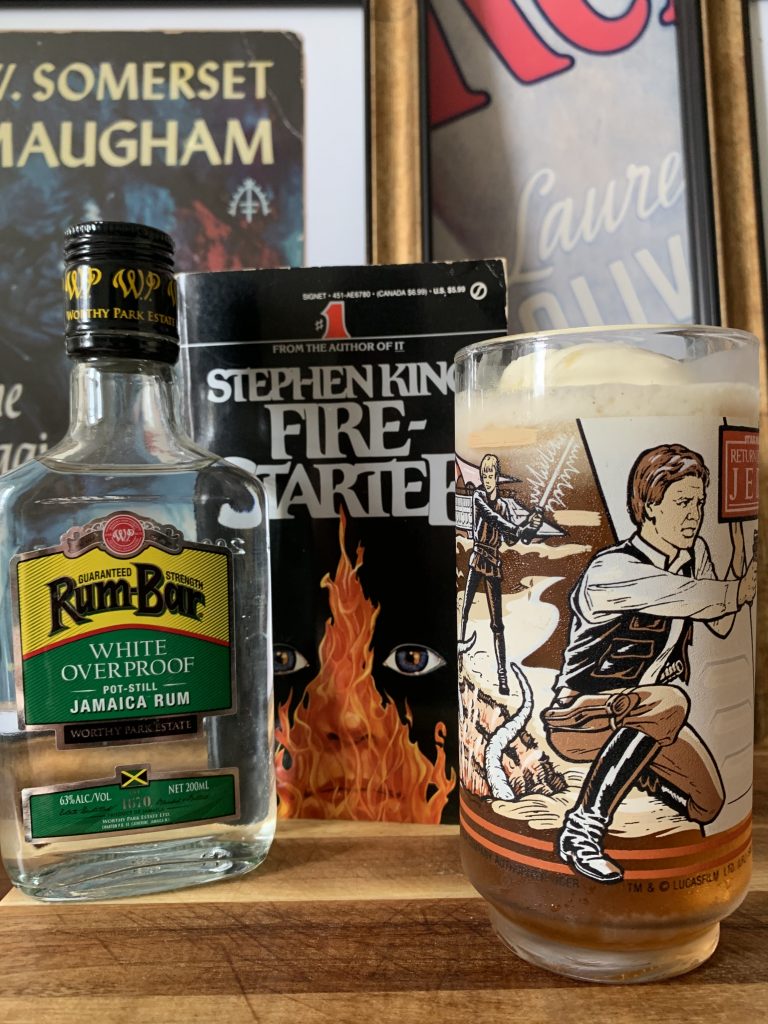 Combine ingredients in a highball over ice and top with Cream Soda. Stir briefly to incorporate. Optional: Add a scoop of vanilla ice cream and an extra dash of Angostura.

*In a measuring cup, break up 2–3 dried arbol chile pods for every 3 oz of Rum-Bar Overproof. Let steep at least an hour, or go longer for more kick. Strain.

This flavor combo is as American as apple pie but with a bite—just like Charlie. Jamaican rum and cream soda are a killer pairing, adding just enough funk to remind you that this is no ordinary trip to the soda fountain. 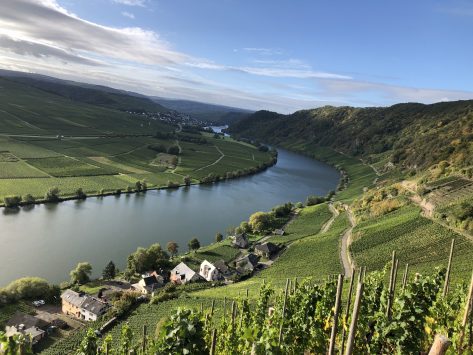 Exquisite 2019s and the Mosel’s Newest VDP Member: AJ Adam
One of the finest estates in the Middle Mosel, AJ Adam is based in the village of Dhron. This pastoral village is in a side valley of the Mosel river, just south of the Piesport, home of the famed Goldtröpfchen...
Read More 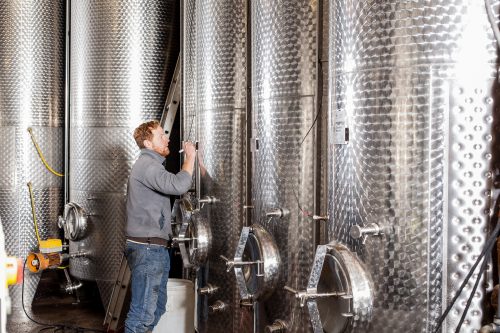 The Last Five Meters: Kruger-Rumpf Comes Into Their Own
Weingut Kruger-Rumpf is just south of Rüdesheim, across the Rhein, about 40 minutes from Frankfurt airport. It’s often one of the first stops we make driving west on the A60, ripping along in whatever stick-shift German car the poor fools...
Read More