One of the finest estates in the Middle Mosel, AJ Adam is based in the village of Dhron. This pastoral village is in a side valley of the Mosel river, just south of the Piesport, home of the famed Goldtröpfchen vineyard. Traveling south from the dramatic and imposing amphitheater of the Goldtröpfchen, the Dhron valley appears very quickly; if you blink, you’ll miss the turn  where the Dhron river flows into the Mosel.

The Dhron river flows almost 40 kilometers through the forests of the Hünsruck hills. Over millennia this small river has cut into the layers of slate in these hills creating the Dhronerthal – the Dhron valley. In the last four kilometers of the valley, the river created a steep set of south and south-west facing hills where cultivating vineyards is possible. On the south-facing bank sits the Dhroner Hofberg, a Grand Cru vineyard site that had all but been abandoned in the mid to late 1990s.

MAP OF THE MOSEL 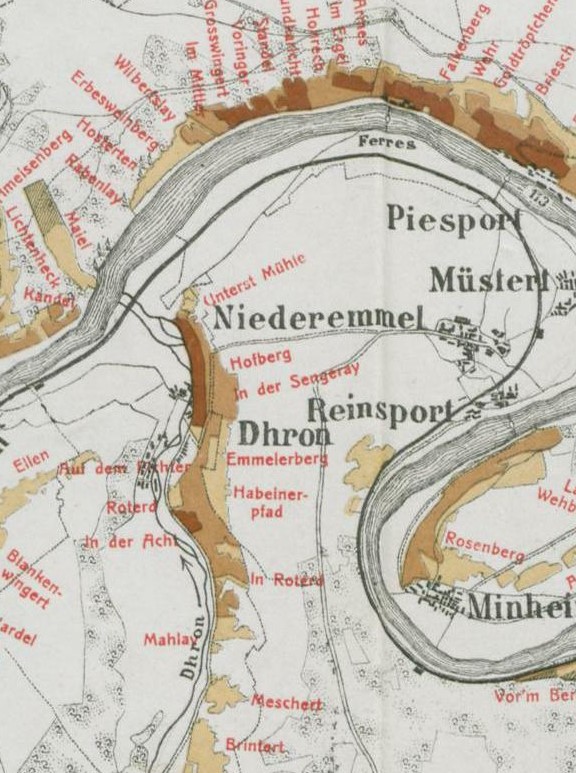 The Adam family has lived in this village for generations. In the 1970s, Andreas and Barbara Adam’s parents moved from Dhron to Trier, leaving behind life in a small village for the city. The family  still had a single hectare of vines in the Dhroner Hofberg, but when Andreas Adam re-started his family estate, wine had not been produced in a generation.

For over 20 years there was no winemaking at our estate. It was our grandfather who was the last one to make wines here in Dhron.Andreas Adam

The first official vintage for Weingut AJ Adam was in 2000 when Andreas was just nineteen years old, working just a single hectare in Dhron, last farmed by his grandfather. His work in Dhron was done while studying at Geisenheim University, the most prestigious winemaking school in Germany, and  interning at some of the great estates in Germany: Heymann-Löwenstein in Winingen, St. Urbans-Hof in Leiwen, and Van Volxem in the Saar. The first few vintages were very busy!

In 2013, Andreas’ younger sister Barbara officially joined the estate after studying viticulture and oenology at Geisenheim too. Barbara worked alongside Andreas during her studies, as well as several other wineries. “I spent time at Franz Keller in Baden, on the Kaiserstuhl, to see about Pinot Noir and the other varieties – and then also Klaus-Peter Keller in Rheinhessen to see something different,” said Barbara. 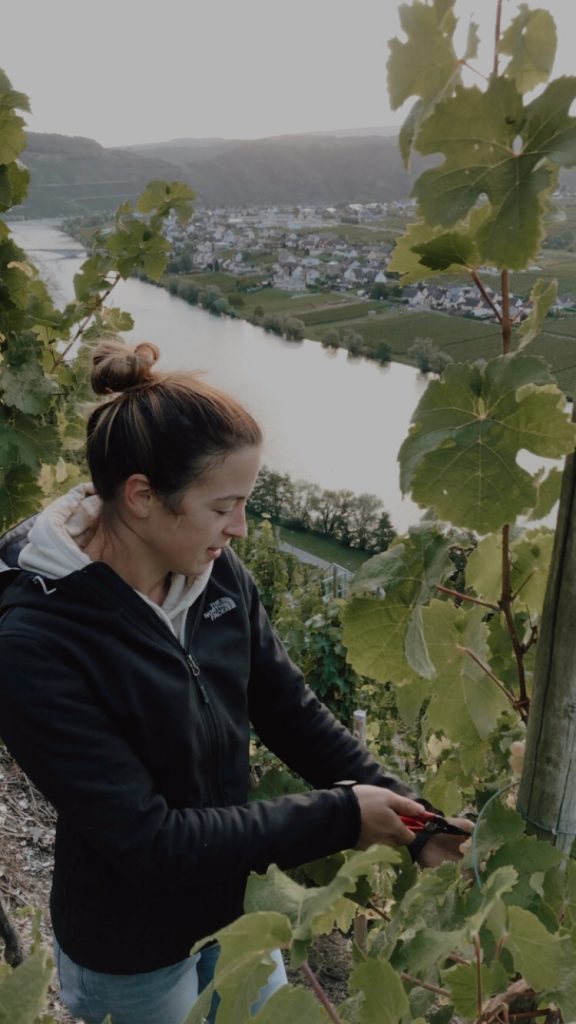 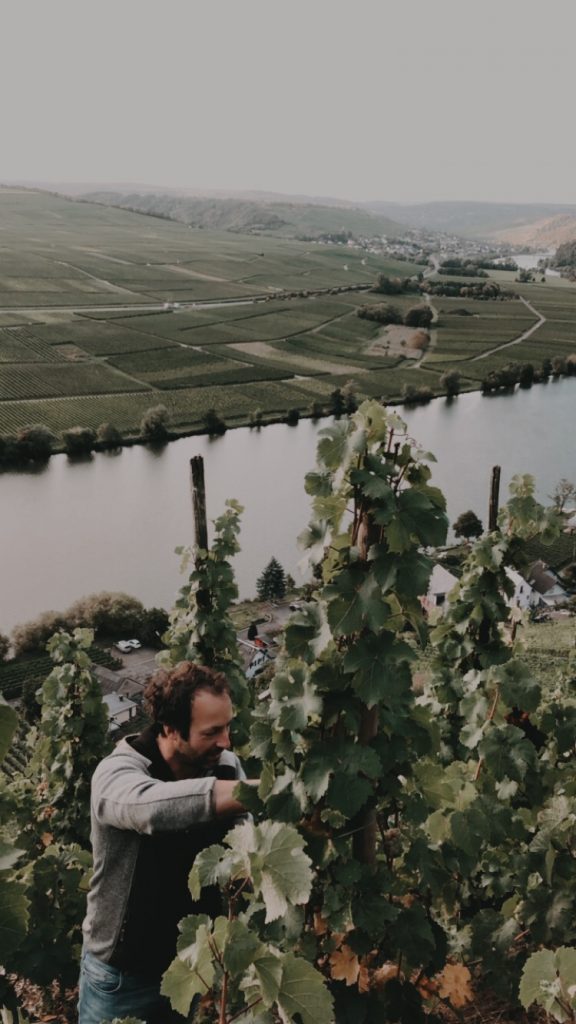 Today, Andreas and Barbara farm just five hectares in three Grand Cru vineyards in two villages: in Dhron, Hofberg, and Has’chen, and in Piesport. the oldest section of the Goldröpfchen.

“Our vineyards in Dhron are more influenced by the Hünsruck hills than by the Mosel river, which regulates the temperatures. You could say that our area in the Dhronerthal is a bit cooler than Piesport, for example. We have a bit of the same situation as the Rüwer valley or the Saar valley, but the Dhronerthal is smaller than these areas,” says Andreas.

“Piesport, and the vineyards there, are full south exposition while in Dhron the vineyards are south, to south-west also, which means some cooler microclima,” continued Barbara.

The Hofberg’s contiguous hillside produces a variety of different wines. Where the valley opens to the Mosel there is more south exposure and the sites are warmer; this is generally where the parcels for producing the Hofberg Trocken (GG) come from. Moving deeper into the valley, the vineyards are cooler, with higher acidity, perfect for off-dry wines. “You have a change of 10 degrees in Oechsle between the deep sections in the valley and vineyards close to the Mosel,” says Barbara.

The Adam’s have also acquired several remarkable parcels in Piesport. Their sites are in a section of the Goldtröpfchen called “Laychen” which means “little slate”. True to the name, the slate here is very fragmented and broken into tiny pieces. The Adams have two different sections here, both ungrafted, terraced, single-pole trained vineyards, with vertigo-inducing steepness. One was planted in 1945, which they’ve had for a decade and one planted in 1908, acquired in 2017.

The Riesling harvested from these sites are made into their Piesporter Trocken (GG) as well as a fruity style Kabinett which has a huge following in Germany. This is the best-known vineyard in the area and Andreas recognizing the privilege of their parcel, remarking “The big part of the Piesporter Goldtröpfchen is 120 hectares and most of this has been replanted in the late 1980s and early 1990s, so we are really happy to have this section from the oldest part of the vineyard.”

In winter of 2013, Barbara and Andreas acquired a very small vineyard called Has’chen, which in the future will almost assuredly be one of the smallest Grosse Lagen in Germany. Just across the Mosel river from the opening of the Dhron valley, Has’chen is just a one-quarter hectare. This is a monopole for the estate and the terraces here are ungrafted, single-pole vines planted in 1930.

Comparing the two villages, Andreas says “In Dhron the soil is completely different than in Piesport. The slate is a grey (weathered) slate, it’s more rocky, and there is more quartz and iron in the soil. It is a little bit wilder than in Piesport where there is more soil and the slate is smaller, more broken pieces. It is softer, blue slate. Dhroner wines are more open when they are young. The Piesporter wines are more closed when they are young. In taste, Piesporter is fruitier, but also more wilder in the nose. The three vineyards are blue, red, and violet – if you’re talking about colors.”

Has’chen is blue; cool, elegant, and precise. Hofberg is red; warmer, more exotic, and textured than Has’chen. Piesport is violet; wilder still and with a distinctive saltiness.

“Dhron has more white fruit character and a more herbal character,” continues Barbara. “They are easier to drink young as dry wines in comparison to Piesport. Piesport is also a bit riper; in the dry wines you find another percentage of alcohol. There is more saltiness in Piesport and Dhron is more open. You find a little more acidity in Dhron.”

“When you do a good job in the vineyard you can feel it in the glass.”

“What we are doing in the cellar is really low tech,” says Andreas. “We accept only excellent fruit and sulfur. That’s it. We have wood barrels, old ones, fuder, and stainless steel here. We have a possibility to chill down the must, but we don’t want to interfere too much.” Barbara continues “There is no fining, no additions to change the aroma or anything like this. We like to work with the lees and bottling after a very light filtration. We don’t use any yeasts at all for our wines, no added yeasts.” There is no magic in the cellar, just hard work all year in the vineyards and excellent sites.

2019 was a challenging vintage in some respects; in early May there was a very hard frost in Dhron, deep in the valley. In June there was good rain, but also hard windstorms that broke a number of shoots. “I think that this is a part of the climactic change in the Mosel, the weather patterns are getting very different,” said Andreas.

In June and July were very dry and quite warm. Flowering was a bit later than in 2018 but then the start of the summer was very hot. The grapes were beginning to ripen and then sunburn was a problem which also reduced yields. “Normally we’re harvesting 55 hectoliters per hectare on average over 5 hectare, but in 2019 we harvested 45 hectoliters per hectare,” said Andreas.

Harvest started very early, around the 15th of September, which was warm. “We harvested all of the basic wines and the Kabinetts before the weather changed completely. The weather moved every day – cold, then warm, rainy, then windy. This meant a lot of selection, but in the end, we were very happy with the quality even though the work was very hard” said Barbara. The harvest was very short, ending with noble sweet Auslesen and BA.

The wines from 2019 are remarkable, showing perfect, knife’s edge balance between the ripeness of summer and crisp, cool acidity.

In December of last year, one of the ranking members of the Mosel VDP asked Barbara and Andreas had interest in joining the organization. They needed time to think about this, and it was not something that they had considered before; you don’t ask to join the VDP – they ask you. After talking it over, they decided that they were interested and talked with the board. The next step was to taste wines with the members, followed by a first vote. In the first vote, there must be a two-thirds majority, which they received. After passing the first vote a number of members came to look at the winery, audited the vineyards and the cellar, asking many questions about production and viticulture. In June there was a second tasting followed by a second, final vote. This vote needed only a simple majority, but they received a unanimous vote.

Congratulations to the 31st member of the Mosel VDP! The first vintage as a VDP producer will be 2020.

We expect that the coming vintage will be full of transparent, classic Mosel Rieslings with balanced ripeness, deliciously crisp acid, and pure ripe fruit, in true Adam style.