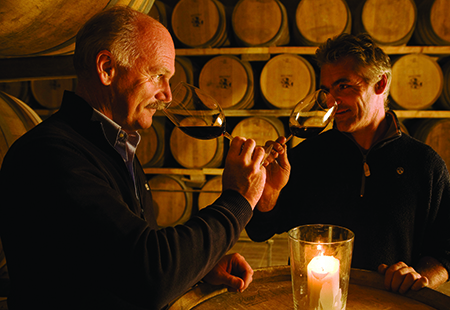 Giuseppe Damonte established Malvirà in 1950, a time when the Roero’s potential was yet unrealized. Giuseppe had a great passion for farming and wine, a passion that he passed on to his two sons, Roberto and Massimo. In 1974, Roberto and Massimo took the reins and began slowly turning the family’s bulk wine business into an estate focusing on quality wine production. Over the course of the next 30+ years, the brothers Damonte worked tirelessly to improve the quality of wines at Malvirà. Today their entire production comes from six vineyards over about 40 HA, all of which is organically farmed.

Few are as dedicated to Arneis as the Damonte brothers. Almost half of their production is the indigenous white grape and in 1983 they purchased the famed Renesio cru. It was from this vineyard that Arneis is said to have first been identified in 1478. Despite its long history in Piedmont, Arneis almost went extinct in the early 1990s when fewer than 60 HA remained.  As true believers, the Damontes have some of the oldest vines around, with averages hovering around 50 years. Much like Chardonnay and Riesling, Arneis provides a great looking glass into its particular terroir. When planted in stony calcareous soils, the wines are steely and mineral – like great Chablis. In clay soils, a rich wine laced with warm tropical fruit is produced.

The entry level Arneis comes from blend of vineyards, most notably the aforementioned Renesio and the Trinità cru. Like all of the Roero, Trinità was once an ocean floor. Its soils contain high proportions of sand and clay, along with many fossilized shells. The wine is aged exclusively in stainless steel and marked by its freshness.  Don’t miss Malvirà’s fantastic Nebbiolo. Most of the grapes come from the top of the Trinità vineyard, where there is a much higher proportion of clay in the soils. The Nebbiolo is hand harvested in early October and aged for 18 months in 450 liter French barrels (50% new and 50% second pass).