Home > Skurnik Unfiltered > News > Save Some Booze for the Sauce

For better or worse (mostly better), fermentation and the consumption of potable alcohol is one of the human race’s defining characteristics.  Since its discovery, alcohol has been used in, and enjoyed alongside, food for its organoleptic and intoxicating properties.  Throughout the world, drinks are a part of the meal… despite not actually being food.  We at Skurnik Wines have built our reputation on the discovery and distribution of beverages, but the vast majority of our team has an equal, insatiable hunger for all things gastronomic.  Alcohol weaves in and out of the food we eat, transcending culture, generational gaps, and socioeconomic differences.

Across the world, home and professional cooks use booze, fermented and distilled, to prepare cuisine.  You can find various types of alcohol used in marinades, cures, sauces, braises, glazes, gelée,  cakes, confections, etc…  Sure, alcohol itself lends a unique flavor (depending on the type of booze and quantity being used), but what’s really cooking just below the surface?  The scientific answer is two-fold, mixed with a healthy shot of the obvious – and, at times, a dash of showmanship.

First, alcohol bonds with both fat and water molecules, bridging the gap between aroma/flavor (fat soluble) and the food itself (water soluble).  Second, alcohol carries and enhances aroma.  Think about deglazing a pan.  The flavor particles of whichever protein has just been browned (maillard reaction) are lifted from the bottom of the pan and dissolved into the alcohol, carrying them and enhancing them in a manner that a non-alcoholic liquid simply cannot.  Perfume is a good example of this, to help wrap your head around the idea.  Similarly, put a splash of vermouth, sherry or vodka into your red sauce or creamy bisque and watch the natural sweetness pop out of the pan.

Chicken & morel mushrooms, braised out in Domaine Rolet Vin Jaune is one of life’s simple, sexy pleasures.  Further south in France (Gascony) and further back in time, one might have partaken in the highly disputed (and now illegal) gastronomic practice of eating Ortolan.  Traditionally, a small bunting would be tricked into gorging on grain, then would be drowned in Armagnac and roasted whole.  After being roasted, then defeathered (sounds backwards, but whatever), the tiny bird would be entirely consumed, as the indulging gourmand covered their eyes/head with a towel in shame, averting God’s gaze… While we do not condone the drowning of cutsie wootsie whittle birds in booze, soaking a quail in Pellehaut Armagnac  does lend a deep, oily flavor and sharp counterpoint to the bird’s dark meat.

Take a raft down the Sevre or Maine rivers and you would be hard-pressed to find more perfect pairing that a freshly shucked oyster and a cold glass of Muscadet.  Beyond that, poach an oyster or a clam (or a scallop or a white flaky fish) in butter with shallots and Amaretto for a sweet, savory, simple treat… made even better by the introduction of an earthy porcini mushroom! Getting hungry yet?

In Korea & Japan, soju & shochu are consumed alongside the meal to cleanse the palate and assist in digestion. Japanese chefs soak the roe of various fish in sake, before curing in salt, preparing the almost cheese-like bottarga.  Alcohol pulls out some of the oily fishy flavor and lends a subtle sweetness to the roe.  Famously, Germanic nations throw back Stanly Cup sized steins of beer, to wash down gamey sausages, schnitzel, and hearty stews.  Cooking sausage and other meats in beer/cider is commonplace; the alcohol provides a bitter fruitiness that makes a perfect counterpoint to the fatty, salt of spiced protein. Domaine Pacory’s Poiré (100% pear cider from southern Normandy) is a great choice for cooking sausages and kraut.  In Scandinavian countries, Aquavit, a vodka-like spirit infused with caraway (plus occasionally dill or anise) is served ice cold, alongside pickled or smoked fish.

The list goes on. Seemingly French, but actually American born, Sauce Diane was one of the fixtures of mid 19th-century continental cuisine.  Similar to Au Poivre, a steak is prepared tableside; its pan juices are mixed with shallots, mustard and sometimes mushrooms, before being flambéed with brandy.  Since alcohol’s flashpoint is lowered when heat is applied, the alcohol ignites and cooks off, the sugars caramelizing and flavors intensifying.

While the use of alcohol to denature protein (like acid in ceviche or salt in gravlax) varies greatly, depending on the strength of the alcohol, it certainly will never hurt as an addition to your dish; at the very least, it will enhance flavor.  Provided you eat fish and can tolerate the nostril burning sensation of radish & mustard, there is nothing more perfect than horseradish-beet-cured gravlax.  While salt does the vast majority of the “cooking” (denaturing protein and extracting moisture), the introduction of Brennivin Aquavit or Greenhook American Dry Gin to the curing process can be a unique pleasure, adding flavors of caraway (Brennivin) or juniper, elderflower, cinnamon & citrus (Greenhook Gin).  These flowery top notes and drying base notes play perfectly against the sweet, earthy flavors of beet and help tame the oily, fatty flavors of the arctic char.  It is also worth mentioning (and imbibing) that a chilled shot of Brennivin, Greenhook American Dry Gin, Vodka or other clear spirit is the ideal pairing to help remove the residual coating of fat from the mouth, throat, and stomach. 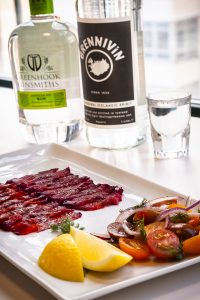 Grate beets, horseradish, lemon and orange zest into a bowl.  Combine with remaining ingredients, sans 2oz booze, set aside.  Lay plastic wrap in a hotel pan, twice the length (or more) that the Arctic Char fillet.  Spread a thin layer of curing mixture, the width and length of the fillet onto the plastic wrap.  Lay fish fillet atop the curing mixture.  Spread remaining mixture over the fish, with less mixture on the thin portion of the fillet than the thick part.  Tightly wrap remaining plastic around the fillet.  Place fish on another piece of plastic wrap and wrap again.   Place a second hotel pan on top of the fish and weigh down using weights or cans.  Refrigerate for 24-36 hours.

Remove from plastic, scrape curing mixture from fish.  Brush with remaining 2oz of aquavit/gin.  Place on plate in refrigerator, uncovered, for 24 hours before serving.   The circulating air will allow a thin layer/sheen to form on the outside of the fillet (pellicle).  Slice and serve alongside chilled shots of Brennivin Aquavit, Gin, Vodka or Mezcal.

New York was founded on oysters.  Even today, working on the train tracks along both sides of the Hudson River, MTA employees come across masses of oyster shells used half a century ago by Native American tribes as a form of currency.  Foot long oysters used to line the Gowanus, rivers and other tributaries in and around New York.  Oysters were one of the most common examples of that historically rare phenomenon: a food that is enjoyed by the poor and rich alike.  While the canning of most shellfish has faded from America’s eating culture, oysters on the half shell and seafood plateaus are once again surging in popularity, gracing the front page of restaurant menus throughout the world.

You know what goes great with oysters? Champagne, Fino Sherry, G&T, martinis and mezcal are obvious.  Less obvious, but no less delicious, is the bitter and boozy Negroni.  The classic Italian aperitif cocktail is a quintessential opener and counterpoint for the rich, salty flesh of an oyster.  It just so happens that as of June 1st, Skurnik teamed up with the Brooklyn-based St. Agrestis, who just introduced their ready to drink Negroni to the Tristate area.  St. Agrestis’s Negroni is a perfectly balanced blend of St. Agrestis Inferno Bitter (available this fall), Greenhook American Dry Gin and a house made sweet vermouth, prediluted and ready to drink straight from the bottle. The St. Agrestis Negroni epitomizes aperitif, with both alcohol and bitter herbs causing the stomach to get those digestive juices flowing, the mouth to salivate, the tongue to prepare for another sip.  Fruiter than the average Negroni, this all-local iteration is delicious and as easy as popping the cap off a bottle of any beer.

So what would happen if you crossed a St. Agrestis Negroni with a classic oyster condiment like mignonette?  Does the acidity of vinegar, coarsely ground pepper and pungent shallot play nice with the fruity, bitter backbone? 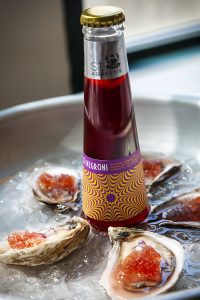 Combine ingredients in a pint container or some other receptacle with a wide diameter.  Place in the freezer and agitate every hour until set.  *If you are unable to check in a shake every hour, scrape frozen Negroni mixture with a fork.  Shuck Oysters.  Garnish with ¼ tsp of chopped shallot, cracked black pepper and ½ tsp of frozen Negroni Mignonette.

*Note: While this semi-frozen concoction is an easy way to prime the palate, and get those stomach juices flowing, one might also look to this a small bite in between courses.  In Normandy, France (and other brandy producing regions throughout France) it is common to be served a shot of chilled, unaged brandy to help make room before the next course.  In Normandy, this is referred to as a “Tru Normand.”

Last, let us satisfy that sweet tooth. Alcohol can be found in countless dessert recipes from around the world, dating back for countless centuries.  Similar to the tableside flambees previously mentioned, orange liqueur and rum are respectively lit ablaze in classic preparations such as Crepes Suzette (1895), Bombe Alaska and Bananas Foster (1950’s).  We’re just sayin’…. if there wasn’t Bourbon in that $5 shake, there sure as Hell could have (should have?) been!

When used in conjunction with chocolate, alcohol brings out sweetness and, depending on the booze, offers up fruity notes that play off of chocolate’s bitterness too.  How do you think those cherries in your Manhattan get brandied?  When combined with the rich, sweet characteristics of caramel, booze assists in both tempering overt sweetness, while concurrently bringing out rich, earthy qualities in caramelized sugar.  Mixed into a glaze (glacé), spirits once again can provide a sharp and somewhat bitter bite that cuts through a dessert’s concentrated sugar, leaving a pop of flavor in contrast with the baked good beneath.  In Jamaica (and throughout the Caribbean), rum is used to flavor cakes and various pastries. 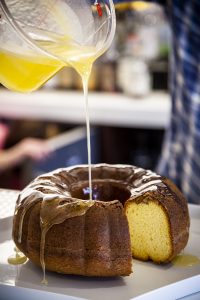 Melt butter.  Mix in sugar and water, stirring constantly to help emulsify.  Remove from heat and stir in Rum-Bar.  Place in refrigerator allowing to cool and thicken.  *If mixture separates, stir vigorously to reincorporate just before serving.  Pour ¾ of glaze over the cake before slicing.  Serve slices of cake with more glaze and a scoop of whipped cream.

Cooking and drinking …and cooking with drinking… has always been a bridge that connects the people and cultures of our gastronomic world.  Alcohol bolsters and transports flavor in a way that nothing else can.  Spirits give and take, cut and bind, brine and burn their way from the bottle to our bellies.  So bottoms up!  Just make sure to save some for sauce…