Halfway between the sea and the sky in Sicily, you’ll find Marco de Grazia’s Mount Etna estate, Tenuta delle Terre Nere. His first commercial release was only in 2002, but the youth of this estate did not impede its becoming one of the best in class, and a reference point producer to all who care about Nerello Mascalese.

Surrounded by the dramatic and almost lunar landscape of Mongibello, Sicilian for “The beautiful mountain,” winemaking on this active volcano is a lesson in risk-taking. It’s here, on the northern side of the appellation, that you’ll find vineyards devoted to the indigenous grapes of the area: Nerello Mascalese, Nerello Cappuccio, Carricante, and Catarratto, along with the lesser known Grecanico and Minnella, all grown at a staggering elevation of 650 to 1,000 meters above sea level.

Truth be told, Marco was really a novice winemaker when he began this project. But his many years of working closely with producers of his own Marc de Grazia selections had prepared him well. Marco has tremendous depth of culture—and not solely that of wine. A student of the classics, he was spoon fed ancient Greek and Latin as a child, so it’s only fitting that he found his highest calling in the former Magna Grecia. Marco’s knowledge of the grand crus of Italy is unparalleled; he has made a career of selling them. And his passion for the wines of the Cote d’Or is no less palpable, which is why it’s no surprise that he utilizes a Burgundian approach to his wines, taking winemaking cues from his terroir. 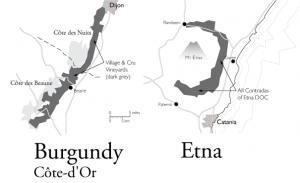 “Burgundian, you say? We’re in Sicily!” But as you see to the right, the Etna DOC would almost mirror the Côte d’Or if only the Côte d’Or were ever so carefully wrapped around a smoldering volcano!

With the fresh arrivals of the 2016 Terre Nere crus, we wanted to take this opportunity to check in on the vintage with Marco de Grazia and find out how 2016 shaped up to be such a standout vintage.

The winter was mild without freezing temperatures. March saw a hailstorm that had the effect of reducing overall yields, and budbreak was early by two weeks. Vegetation was accelerated by a spring heat wave in April. May was cool, with the proper amount of rain, and lead the way for the sunny days of June and July. Ripening was kept in check by temperature changes of over 30°F between day and night. Welcomed August rainfall continued through September, slowing veraison and keeping the vignerons on their toes, but by pruning and thinning bunches—always working organically mind you—the clusters remained healthy and intact. 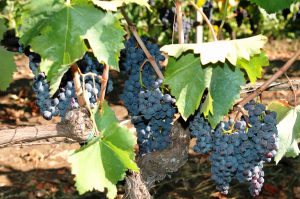 The first white grapes were harvested at the end of September, perfectly healthy, with vibrant acidity and lower brix than average years. In the meantime, Nerello Mascalese and Nerello Cappuccio remained the stoic soldiers of the volcano as they greeted October. The month came with the mountain winds, ultimately drying off any remaining moisture and giving the hanging grapes time to ripen unimpeded. The end of harvest came full circle as the weather was again mild, giving our farmers time off their tippy toes, with the focus now turning to the winemaking.

In the glass, the 2016 vintage shows perfectly perfumed, lifted, and vibrant, with a nicely weighted balance of fruit and moderate levels of alcohol. In a few words, an absolute joy to drink. Approachable now, but with a spine of structure that will allow the crus plenty of time to age, the 2016 vintage is not bombastic. Rather, it’s a vintage that allows the wine to tell the story of the place that is Mount Etna. 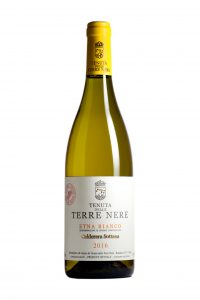 100% Carricante grown in volcanic ash soils speckled with black pumice and solid volcanic rock, all at an altitude of 600-650 meters. Soft pressing with low-temperature fermentation in French oak barrels of a capacity of 5 and 10 hectoliters. Malolactic fermentation and maturation in French oak barriques for 10 months. Finished in the bottle for 8 months before release. 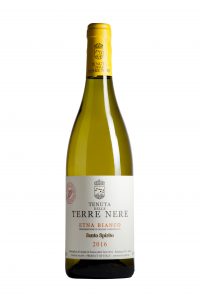 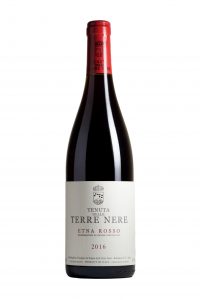 95% Nerello Mascalase and 5% Nerello Cappuccio from the townships of Castiglione di Sicilia and Randazzo. Alcoholic fermentation and maceration on the skins last from 10 to 15 days. Malolactic fermentation and maturation are carried out in oak (25% new).  After 18 months, the wine is bottled without filtration. 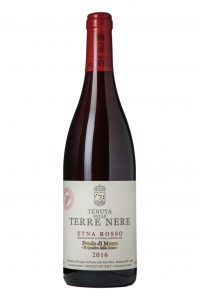 Terre Nere holds 1.5 hectares of the Feudo di Mezzo cru, comprised of 50-80 year old gobelet-trained vines at 600-750 meters of altitude on the northern slope of Mt. Etna.  The soil here is soft, deep volcanic ash with basaltic pebbles. Spontaneous malolactic fermentation and aging in French oak barriques and tonneaux.  The wine is bottled after 18 months of oak aging. Of all the crus, Feudo di Mezzo is usually the first to be ready to drink. 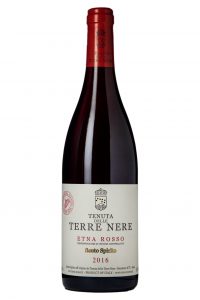 The two vineyards in Santo Spirito were the last plots acquired by Terre Nere, located adjacent to Guardiola’s northern boundary, and lower in altitude, as its slopes descend toward the Alcantara valley.  Composed of 98% Nerello Mascalese, 2% Nerello Cappuccio from 40-100 year old vines grown in deep volcanic soils. Spontaneous malolactic fermentation and aging in French oak.  The wine is bottled after 18 months of oak aging. 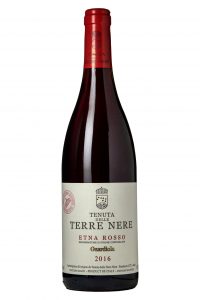 At an altitude of 800-1000 meters on the north side of Mount Etna, the Guardiola cru is one of the highest vineyards in Europe. The vines are almost all pre-phylloxera, with the exception of a few, which have been individually replanted. Training is traditional gobelet with tight spacing, steep and terraced, which means the vineyards have to be worked by hand.  Spontaneous malolactic fermentation and aging in French oak. The wine is bottled after 18 months of oak aging. 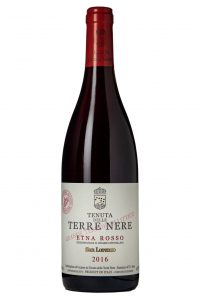 The San Lorenzo is from 4 hectares of vineyards in the same named district in the town of Randazzo. The vines are more than 70 years old. At an altitude of 750 meters above sea level, planted to soils that are almost pure volcanic sand. The terroir in contrada San Lorenzo is originated by lava flows and volcanoclastic deposits related to the explosive activity of the the Ellittico eruptive center, which dates back from 60,000 to 15,000 years ago. Although very young by geological standards, the soils from the Ellittico eruption are the oldest superficial strata in which one may plant on Etna. The reason is simple: millennia of lava flows have buried all older soils, leaving, in fact, only very small and rare parcels of Ellittico soils. On the northern slopes of Etna there are four or five Contrade that have terroir from the Ellittico. Three, however, have mixed soils, blending soil from Ellittico of igneous nature with alluvial soils of sedimentary nature due to the overflowing of the Alcantara river. Only two Contrade out of hundreds and hundreds are “pure” terroir Ellittico: Calderara and San Lorenzo. It was important to Marco to mention this on their labels, so as to facilitate a distinction. 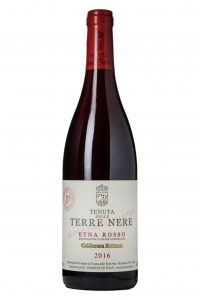 The Calderara Cru is composed of two vineyards, totaling roughly 15 hectares, at an altitude of 650-700 meters.  A small portion of Calderara is pre-phylloxera, the remainder is 40-50 years old. The soil is extremely rocky volcanic ash overrun by black pumice and solid volcanic rock. Alcoholic fermentation and maceration lasts 10 to 15 days; malolactic fermentation and maturation are carried out in oak.  After 18 months the wine is bottled without filtering. 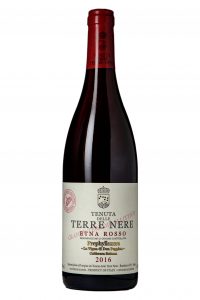 98% Nerello Mascalese, 2% Nerello Cappuccio.  The soil here is rich in rocks with traces of ash.  The vines were planted before the phylloxera plague that happened in the late 1800s and stand ungrafted today with an average age between 130-140 years old.  The vineyard extension covers 1 hectare in Calderara Sottana and sits on the northern slope of Mount Etna at 600 meters above sea level.  Vinified with temperature control, followed by spontaneous malolactic fermentation and aging in French oak barriques and tonneaux.  Bottled after 16-18 months of wood aging.  500 cases produced.