This is our fifth installment in a series that defines sustainability in spirits and shares some selections from our very own spirits portfolio. 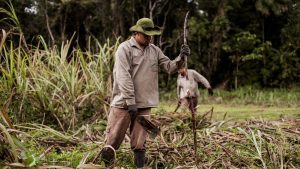 In the heart of the Atlantic Forest in Morretes, Brazil lies the distillery Novo Fogo. This cachaça producer has both a USDA certification in addition to the rigorous French-based ECOCERT which also certifies labor conditions. Their sugarcane farmers harvest by hand and are often described as the unsung heroes of the Novo Fogo story. The work is year-round in rainforest humidity and high temperatures: planting cane, pulling weeds, tilling fields, and machete- harvesting. Novo Fogo commits to the health of their workers through simple practices, providing access to free water and food, providing indoor work when the temperatures peak, and encouraging breaks. They also receive annual raises, child allowances, medical insurance, and in some cases, free housing.

The distillery operates as low-impact and carbon-neutral by reducing what emissions they can and off-setting what they can’t. Helping to balance their emissions are the preserved forests on the property, a growing reforestation project, and purchases of carbon offsets through an agency called NativeEnergy. Due to its abundant plant and animal diversity, the Atlantic Forest is designated by UNESCO as the world’s second-largest Biosphere Reserve. Novo Fogo has also initiated a project called The Un-Endangered Forest, a reforestation project to plants trees and acts as a steward of the Brazilian jungle. The Atlantic Forest is certainly in need of a steward as it has lost 88% of its original area due to deforestation, threatening 11,000 species of plants and animals as a result. The cachaça industry has historically played a complicit role in this deforestation through the use of endangered trees for barrel aging.

There are, however, legal and responsible ways to use native wood through obeying state and federal laws, understanding the life cycles of trees, and verifying claims of ‘sustainability’. The Brazilian government offers a wood certification called the Documento de Origem Florestal (DOF) that ensures ethical and legal practices for coopers and their customers. Novo Fogo verifies their supply chain with the DOF and offers it for their customers’ inspection as well when Brazilian wood is used in releases including Graciosa, Colibri, and Tanager. in their Two-Woods Series. In addition to ethical sourcing, the project also rehabs threatened species of endemic trees by planting seeds and saplings in a local nursery at Ekoa Park and eventually planting trees on Novo Fogo’s property and with partnering neighbors. With aspirations of national expansion, let’s hope that someday The Un-Endangered Forest project fulfills its dreams of restoring the Atlantic Forest to its full glory.

Both fruity and salty, Novo Fogo’s Silver Cachaça is the base spirit for the world’s most popular cocktail, the Caipirinha. Rested in stainless steel tanks for 1 year. 40% ABV

An extremely versatile expression, Chameleon is both funky and mixable. Aged in repurposed American oak barrels for 1 year and bottled at a higher proof of 43% ABV. 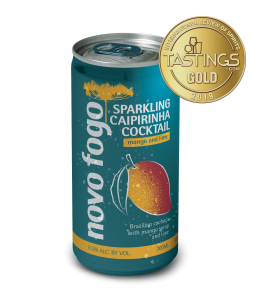 Novo Fogo presents an exciting twist on the national cocktail of Brazil by adding mango to the classic caipirinha. Aromas of lychee and peach gummies are balanced by a note of grilled jicama and an elegant, white tea finish. Enjoying a compelling and well-balanced cocktail has never been easier! 8.5% ABV 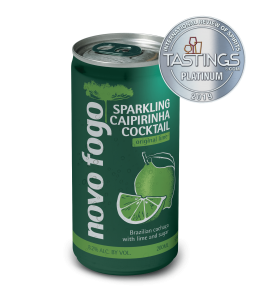 The world’s most popular cocktail has been carbonated and canned, and it tastes as a proper Caipirinha should! Each can has a volume of 6.8 ounces and an ABV of 8.2% for a perfectly portioned vacation in a can. 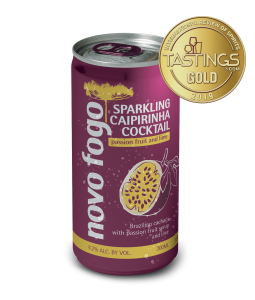 If passion fruit alone is evocative of sun-drenched getaways, imagine what happens when you add it to a caipirinha! Brazil’s national cocktail is made even more refreshing with a sweet-tart kiss of passion fruit, all in a perfectly portioned serving at a quaffable 8.2 % ABV.