This is our third installment in a series that defines sustainability in spirits and shares some selections from our very own spirits portfolio.

In the highlands of Arandas, Jalisco lies Tequila Supremo (commercially known as Casa Camarena), producers of Azteca Azul. Since the inception of their first distillery in 1938, the Camarena family rose to prominence in the agave world to become one of the largest and most respected tequila distillers in the world.

In 2007 the company’s engineers developed a patented technology called “ZERO-D Ecological Recovery” which employs a multi-step recycling device. Tequila production notoriously produces a good deal of waste, from the spent agave (known as bagasse), to the highly acidic vinasse which is leftover liquid from the distillation process. Since most tequila distilleries are located near rivers, special care needs to be taken to keep contaminates from public drinking water.

Azteca Azul not only keeps their environment safe from improper waste disposal, but also manages to transform its by-products into useful products.

During the ZERO-D process, vinasse is essentially centrifuged to separate the sugar solid from liquids and further concentrate the sugars by transforming the liquids into steam. Their modern equipment then continues to process those sugars as cattle feed, and the steam is transferred back into the ZERO-D production as liquid gas for tequila production. 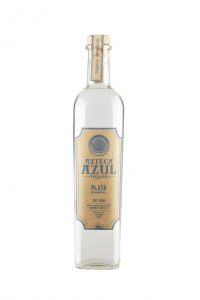 This unaged expression of Azteca Azul has intense aromas of honey and sweet, roasted agave, with citrus notes of grapefruit and floral notes of anise and mint.

It tastes of honey, coconut, banana, and peach. 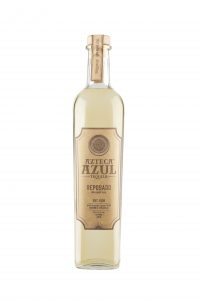 The honey, tropical fruit, and mint present in their Plata Tequila is complimented here by subtle notes of cinnamon and vanilla.