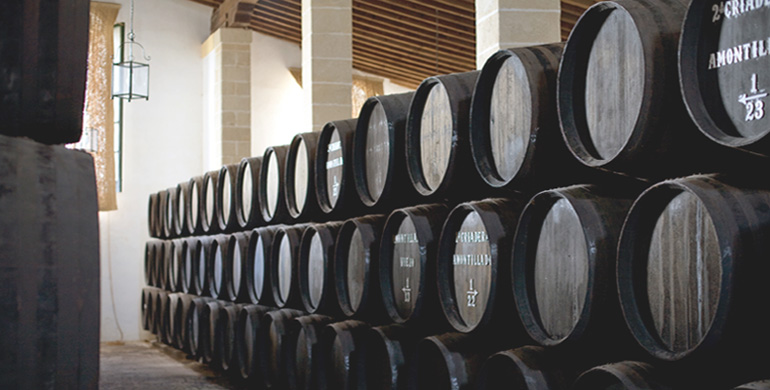 Bodegas Tradición is located at N° 3 Calle Cordobeses in an unassuming little plaza in the Santiago Quarter of Jerez de la Frontera. Along with the San Miguel Quarter, Santiago is famous as a Gitano neighborhood. Indeed, many of the most revered names in the history of flamenco lived and performed there. In an interesting bit of geographic coincidence, the bodega’s humble installations are just a few blocks away from the Museo Arqueológico Municipal de Jerez de la Frontera, a small museum which nonetheless boasts a fine collection of artifacts dating back to the Paleolithic Age, including many objects related to the region’s 3,000-plus-year history of wine production.

In many ways, Bodegas Tradición has more in common with the archaeological museum than it does with a conventional winery. Tradición is one of the youngest outfits in the region, yet it houses some of the oldest wines. With the exception of a Fino, which at approximately twelve years of age is an unusually mature wine for its category, all the wines at Tradición are older than the firm itself.

Bodegas Tradición was founded in 1998 by Joaquín Rivero Valcárce, scion of one of the region’s most historically prominent wine families. Bodega CZ, J.M. Rivero was established in the early 1650s, making it one of the oldest firms on record. It’s golden age was most certainly the 19th century – in 1855, it housed over 3,000 butts and commercialized a dozen or more world-renowned brands. The bodega’s fortunes waned with those of the region, and it was finally sold in 1991 to a Cordoba-based olive oil and vinegar concern, adding it to the long list of historic firms that shuttered in the latter part of the 20th century.

Despite the decline and eventual sale of the family bodega, Don Joaquín himself became immensely wealthy through his work in construction and real estate. It was with the backing of his personal fortune that Bodegas Tradición was born. “The name Tradición,” he said, by way of a mission statement, “corresponds to a dual requirement: continuance of the family wine business and a return to the traditional styles and processes in the making of Sherry wines.” There is a conspicuous absence of technology in the cellars – all the operations of the bodega are undertaken by hand using traditional tools.

In order to establish its soleras, Tradición bought carefully selected butts from other bodegas. The sources of their current collection are myriad, including, but not limited to, Domecq, Agustín Blazquez, Croft, Delgado Zuleta, Osborne, Paternina, Sandeman and Bobadilla. The component wines were then blended to achieve the desired style. The otherworldly Amontillado is composed of wines from Jerez, El Puerto de Santa María and Sanlúcar de Barrameda, a fact that undoubtedly contributes to its staggering complexity. The team that was assembled to establish and maintain the soleras and run the firm was of unsurprisingly élite pedigree. On the selection and blending side was José Ignacio Domecq Fernández de Bobadilla, former oenologist at Domecq and son of José Ignacio Domecq González, AKA “The Nose”, one of the most revered oenologists in the history of Jerez. José “Pepe” Blandino, a capataz with close to fifty years of experience at Domecq, was charged with 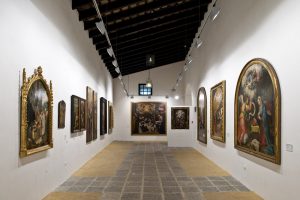 buying old casks and making the arrangements to set up the soleras. Pepe is currently responsible for the day-to-day operations, assisted by his son, José Luis. Lorenzo García-Iglesias Soto acts as Director General. Upon Don Joaquín’s passing in 2016, his daughter, Helena Rivero López de Carrizosa, took over as President of the firm.

In addition to vinous treasures, the bodega is also home to the finest privately-held collections of Spanish painting in the world. The Joaquín Rivero collection is comprised of more than 300 paintings spanning periods from the 15th through the 20th centuries, including noteworthy works by Zurbarán, Velásquez, El Greco, Goya and Picasso.

That Obscure Object of Desire, Luis Buñuel’s 1977 masterpiece, is a madcap and often hallucinatory account of a bizarre courtship, with the great Fernando Rey as Mathieu and Carole Bouquet and Angela Molina alternating in the role of Conchita, the Sevillana flamenco dancer he pursues. “What does this have to do with wine?” you might ask. Perhaps the analogy is a bit of a stretch, but the film, much like the work of Buñuel’s contemporary and sometime collaborator Salvador Dalí, eschews linear narrative in favor of a more elliptical contemplation of the nature of desire, the privileging of the sensual over the rational, the id over the ego. In a similar way, these wines, especially the VORS bottlings, resist conventional analysis. They are analog wines – the vibrations they produce cannot be distilled down to a series of 0s and 1s. I would no sooner attempt to offer tasting notes for them than one would attempt to describe the beauty of the Aurora Borealis in terms of protons and electrons. These are wines that provoke an emotional response, wines that are felt more than they are understood.

Though they are not labeled as such, all the wines from Bodegas Tradición are bottled en rama – no chill-filtering, no cold-stabilization, no added sulfur. The Fino undergoes a very gentle filtration to remove solid yeast particles (as is the case with all Fino en rama). Despite a general 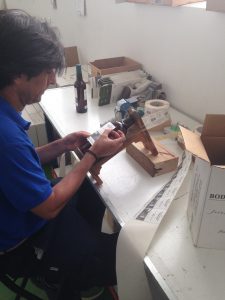 feeling in the market that en rama wines are more “fragile” than conventionally bottled ones, customers should have no fear about keeping the VOS and VORS wines for months or even years after opening. However, as with any wine, proper storage is strongly encouraged.

VORS stands for Vinum Optimum Rare Signatum, though it is more commonly referred to in English as “Very Old Rare Sherry”. Wines carrying this imprimatur have not only been certified as having an average age of thirty years or more, they have also been tasted by a panel of experts in order to verify that they meet the extraordinary standards of quality expected of the category.

VOS stands for Vinum Optimum Signatum and is the designation used for wines of at least twenty years of age.

All wines are hand-bottled, hand wax-sealed and hand-labeled. All labels are hand-numbered by Pepe Blandino, the capataz. 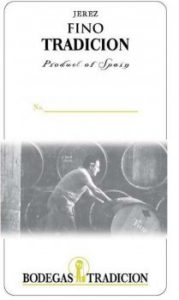 This wine is a maximal expression of fino. It has been raised in old American oak casks, well over a decade, substantially longer than normal, underneath ‘flor’, the film of yeasts that simultaneously feeds off, nourishes and protects the wine. 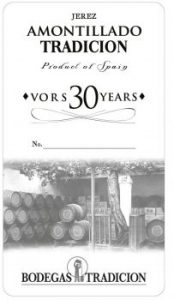 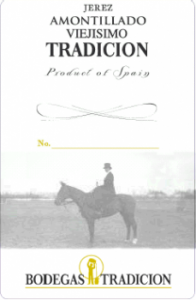 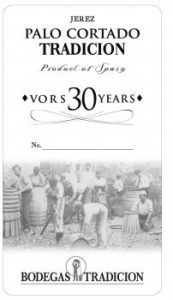 This rarest dry-wine style exhibits characteristics of both Amontillado and Oloroso, in its perfume and body.

A very special selection of wines is aged in the traditional Solera system for many decades in seasoned American oak barrels. 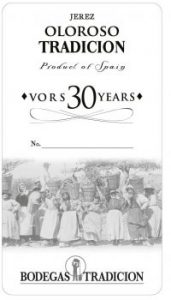 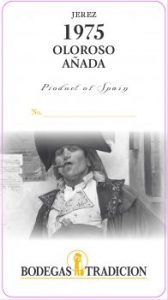 This vanishingly rare bottling hails from a single vintage– 1975– and having been bottled at 42 years of age without any refreshment with new wines as in the standard multi-vintage solera system, it maintains an incredibly pungent, expressive and mature character. 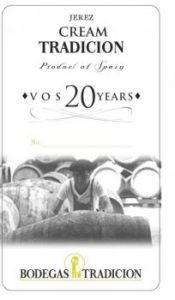 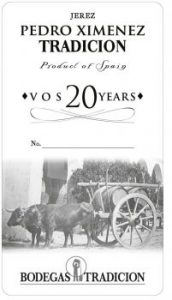