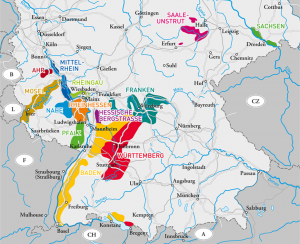 The Nahe is one of the smallest and the most geologically diverse regions in Germany. First legally recognized in 1971, this area is named for the Nahe River and is home to some of the finest vineyards and wineries in Germany. The Nahe River flows through the Hunsrück hills which separate the Nahe and the Mosel to the west, emptying into the Rhein across the river from the village of Rudesheim. To the east, just across the Nahe River, is Rheinhessen, the largest growing region in Germany, more than six times the size of the Nahe. Directly south of the Nahe is the Pfalz, the second warmest growing region in Germany.

The Nahe has a multitude of different soil types, but it also varies climatically. The region can be split into two sections, with the main city of Bad Kreuznach acting as the midpoint between the northern and southern sections. The Nahe River meanders through Hunstrück hills, first moving in an easterly direction, until it reaches the region’s largest city, Bad Kreuznach, where the river turns north, flowing into the Rhein.

South of Bad Kreuznach, the Nahe River moves from west to east in a slow, winding pattern through a tightly closed valley. Here, the climate is cool as winds from the forests and Hunsrück hills to the west filter cold air through the valley.

The classification: three levels of site with the darkest red denoting the Grand Crus. Click the map to zoom in! 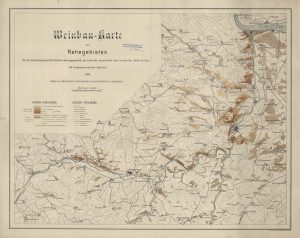 The city of Bad Kreuznach sits in the middle of the region and as the river moves through the city, it shifts direction, flowing more or less due north, before leaving its easterly course. The valley north of Bad Kreuznach is wider, open, and generally warmer.

The change in direction of the Nahe River also shifts the exposition of hillsides along the river. South of Bad Kreuznach virtually all of the best sites sit on the northern bank of the river, facing south. North of Bad Kreuznach, however, the northerly direction of the river’s path creates less favorable eastern facing expositions. A series of smaller streams and creeks flowing into the Nahe from the hills to the west become very important. Creeks or “bach” like the Katzenbach, Gräfenbach, Guldenbach, Trollbach, and Krebsbach create small side valleys of south-facing vineyard sites.

The most important villages north of Bad Kreuznach are Roxheim (on the Katzenbach), Wallhausen (on the Gräfenbach), Windesheim (on the Guldenbach), Langenlonsheim and Laubenheim, both directly on the Nahe, Dorsheim and Burg Layen (both on the Trollbach) and Münster-Sarmsheim (on the Krebsbach). The best sites in these villages are south-facing as the creeks here run from west to east into the Nahe, the same direction that the Nahe flows south of Bad Kreuznach. The best of these sites are equal in stature and quality to the vineyards directly on the river in the southern part of the region. In this section of the region, we represent Kruger-Rumpf in Münster-Sarmsheim and Schlossgut Diel in Burg Layen.

While the vineyards in the northern section of the Nahe generally flower and ripen earlier, this is not a “warm” growing region. The open, rolling hills and sun-drenched vineyards of the Rheinhessen to the west are often warmer, while the wines from the mostly south-facing Rheingau produce structured, ripe, and aristocratic wines.

While you’ll find different climactic differences in the northern and southern sections of the Nahe, even more diverse is the geology of the region and the rapid change of soils over short distances. The region is home to soils from the full geologic cycle from igneous (volcanic melaphry, porphyr, quartz) to sedimentary (sandstone, clay, limestone) and metamorphic (slate), as well as alluvial, eroded and wind-blown deposits of loam, sand, and loess.

Often, a single vineyard contains a number of different soil types. Niederhäuser Hermannshöhle, the top site according to the Prussian Tax map classification of 1901, contains slate, veins of organic sedimentary rock (coal), volcanic melaphyr, and limestone in just one single 8.5-hectare conical hillside. One kilometer away, in the Schlossböckelheimer Felsenberg vineyard, you’ll find pure volcanic soil with almost zero topsoil. In Dorsheim, Goldloch is a mixture of gravel, slate, and quartz, while less than 300 meters away Burgberg is almost pure Permian era conglomerate. A vast difference in such a short distance!

It’s often said that the Nahe combines the cooler character of the Mosel – the village of Dorsheim in the northern part of the Nahe is on the same latitude as Bernkastel – and the ripeness and power of the Rheingau. It is this special climate and distinctive soils that allow Riesling in both the off-dry and dry styles to find their natural balance.