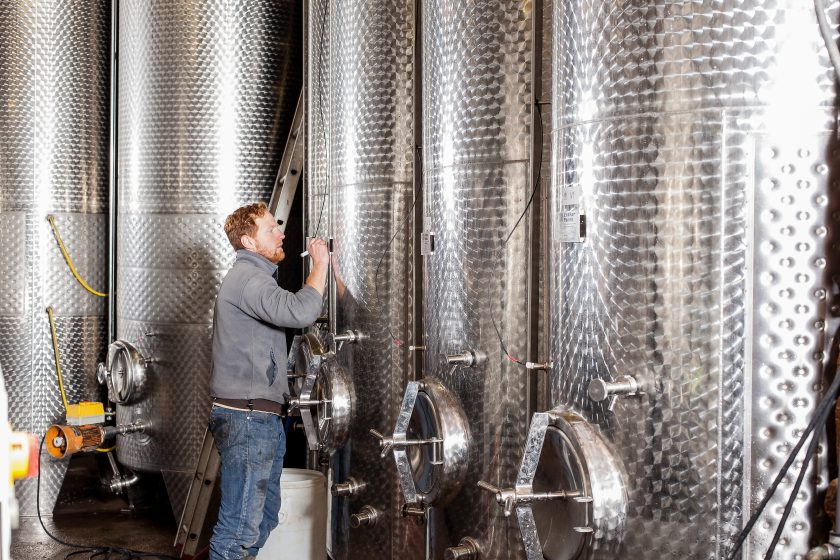 The roots of the Kruger-Rumpf estate date back to the early 1700s. Like most vine-growers at the time, the family sold the majority of their grape production to larger houses or cooperatives. This practice continued through the ninetieth and early twentieth centuries until Stefan Rumpf kept the majority of their harvest to produce their own estate wines in 1984. This move allowed Kruger-Rumpf to focus on quality and express the distinctive terroirs in the family’s holding. Stefan’s sons Georg and Philipp, are continuing the trajectory with renewed energy and technical skill. The brothers Rumpf graduated from Germany’s prestigious Geisenheim University; Georg studied viticulture and oenology, while Philipp focused on wine economics. With Georg in the cellar and vineyards, this estate is producing world-class wine. This is an innovative estate that is on the move, always striving for new levels of quality and terroir expression. “I’m still trying to improve what I’m doing,” says Georg. “I’m not at the end of the road and still searching for the best possible expressions for each site that I can produce”.

We’ve been watching the development at Rumpf for the past five vintages with an especially close eye. The number of sites and wines had, at times, felt like it was bordering on too much, even for someone with as much energy as Georg. Married now, with two beautiful girls, Georg credits his wife Julia and family in his rethinking and reshaping the winery. It’s a more conscious decision now, and he knows where he wants to expend his energy and what the future of the domaine is.

The Kruger-Rumpf estate is located in Münster-Sarmsheim, a small village on the western side of the Nahe River, in the most northern section of this region. Paradoxically, though it is the furthest point north and where the Nahe meets the Rhein River, it is the warmest area of this region. Geographically unique, this area represents the intersection of four major German wine regions: the Nahe where the winery is located, the Rheingau and Mittelrhein to the north, Rheinhessen to the east.

The majority of Kruger-Rumpf’s holdings are located on the western side of the Nahe, though they also own parcels directly across the Nahe River in Binger Scharlachberg, which is part of the Rheinhessen. Standing in Kruger-Rumpf’s parcels in Rheinberg (Nahe), one can look out to Scharlachberg across the Nahe River in Rheinhessen, as well as the southern bend of the Rheingau and the Rudesheimer Berg, one of the most famous parts of the region, visible to the north.

Kruger-Rumpf’s holdings represent some of the greatest terroirs in the region with south-facing exposures and classic Nahe soil compositions, though each is uniquely arranged. The Grosses Gewächs sites are the jewels of the estate: the steep slate vineyard Münsterer im Pitterberg while the Münsterer Dautenpflänzer, a tiny parcel within Kapellenberg is quartzite and loess-clay based. Both sites are south-facing allowing for the production of high quality Grosses Gewächs (dry) styled wines. Binger Scharlachberg located in Rheinhessen, is composed of quartz and red sandstone soils and produces a Grosses Gewächs of power and finesse. The 2 hectare Dautenpflänzer is rarely affected by frost and the top layer of soil is nutrient rich, both factors are important in cultivating young vines. The name Dauten means “shoot” and pflanzer means “planter,” a nod to its previous life as a vine nursery The Münsterer Rheinberg. Located behind the village, Dautenpflänzer is made mostly of quartzite with sandy loam and a south/south-east exposure.

Georg is committed to organic viticulture and while they have been practicing organic for several years, they have started the transition for certification. Bees are kept nearby to facilitate pollination and aid in overall bio-diversity. Periodically sheep are allowed to roam the vines helping to control underbrush. All vineyards are hand harvested to ensure that only optimally ripe grapes are selected. Stefan believed that “you can’t improve wine in the cellar, only make it worse,” and Georg has continued his cellar work with this philosophy in mind. Fermentations occur spontaneously with ambient yeast for the fruity wines. Ambient yeasts are preferred though sometimes a neutral strain of cultured yeast is required to complete its fermentation. Often the wines stay on their gross lees well into spring. The wines produced to show the best of Kruger-Rumpf’s renowned vineyard sites, with brilliance, concentration, and extract.