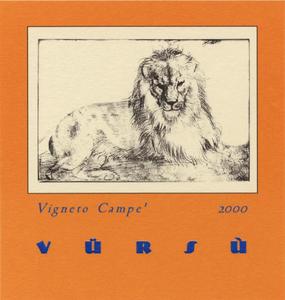 In the spring of 2000, the Rivetti family acquired the 8ha Campè Vineyard, thus fulfilling one of Giorgio’s long-time dreams. The story of the Campè vineyard is quite interesting, and if vines could speak, they would tell you how thankful they are that the Rivetti’s purchased the vineyard. The family took over this south-facing hillside from a producer who never had intentions of making a great wine. In fact, all of the grapes were being sold in bulk to other Barolo producers, and the yields were at the high end of the allowable range for the region. Through a rigorous green harvest, La Spinetta reduced the previous production by 75%, leaving just 25% of the fruit on the vine. The usage of chemicals in the vineyard was prohibited and instead fertilization was carried out utilizing horse manure and extensive manual work throughout the year. Today, the vineyard is full of healthy, strong vines that are over 50 years old and produce exceptionally low yields of extremely high-quality fruit. Campè is a true Cinderella story in Barolo!