Perched atop the monopole of Bricco Boschis, you’ll find the Cavallotto family and their rolling vineyards. Now in the 4th generation of ownership, the Cavallotto estate, founded in 1928, covers 23 hectares of contiguous land in Castiglione Falletto. It’s here that Barolo’s famed calcareous marl soils dominate, all at an elevation of almost 300 meters above sea level. With panoramic views of much of Barolo visible on a clear day, it’s not hard to imagine why the Cavallotto family has decided to plant their feet firmly to this very ground.

As the sole owners of the Bricco Boschis cru, it’s important to talk about its origins. Originally named Monte della Guardia, our modern day monopole would not exist if it weren’t for 18th century French Countess Juliette Colbert, the last Marquis of Barolo. The Countess decided to leave her land and the estate to none other than her devoted vineyard manager, Giuseppe Boschis, whose namesake remains to this very day.

Enter our first Cavallotto proprietor and patriarch, Giacomo, who purchased the entire Boschis estate in 1928, with the focus on farming the land and selling the fruit. It was Giuseppe’s grandchildren, Olivio & Gildo Cavallotto, who first began vinifying the grapes of their estate, under the instruction and direction of their father and uncle. Their first bottling came in 1948 and, by 1970, they decided to make what was, at the time, a rather novel move by placing the name of not just the cru of Briccho Boschis on the label, but also their single vineyards of Vigna San Giuseppe (“Giuseppe’s Vineyard” named after their father), Punta Marcello (“Marcello’s Hilltop” named for their uncle), Colle Sudonest, and Vigna Cuculo. In 1989, the Cavallotto family widened their span of terroir-driven wines by purchasing the historic Vignolo cru, sitting adjacent to their home on Bricco Boschis, which had never before been bottled as a single vineyard.

Today, we find the 4th generation of Cavallottos at the helm: Olivio’s children, Alfio, Giuseppe, and Laura.  Devoted to tending their land with the greatest care, all farming is done organically and the focus on expressing their wine’s sense of place continues with 100% estate owned and farmed fruit. The family has, through each generation since their patriarch Giacomo, stuck to the traditions of the region through the use of long macerations and aging in large, neutral cask. Fleshy rather than flashy, these wines seem to transport as through time capsules. Whether it’s their Chardonnay or Dolcetto d’Alba, their Barbera d’Alba or Vigna San Giuseppe Barolo Riserva, each bottle of Cavalloto places you right there, at the top of Bricco Boschis, overlooking Barolo and discovering the place in a way like never before. 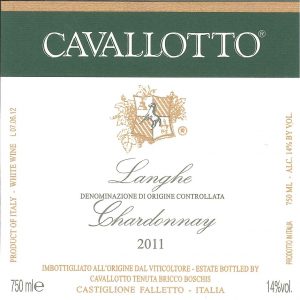 100% Chardonnay grown in calcareous clay soil with east-northeast exposure. Fermentation takes place in temperature-controlled steel tanks, with just 40% malolactic fermentation for weight and texture. The wine is then matured in stainless steel tanks for 5 months to retail the wine’s purity and freshness. 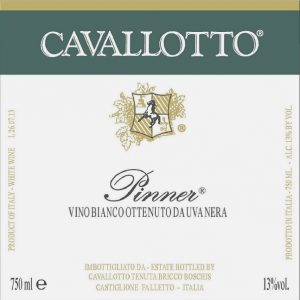 This wine is 100% Pinot Nero (fermented without the skins) and results in a delicious and serious white wine! Coming from the area of Castiglione Falletto, the wine is fermented at a low temperature for a period of 58 days. Afterwards, the wine stays on its lees for 9 months before release. 450 cases produced.

“Pinner” is the reincarnation of the estate’s formerly known “Langhe Bianco” due to changes in Italian legislation. PINot NERo -> Pinner!” 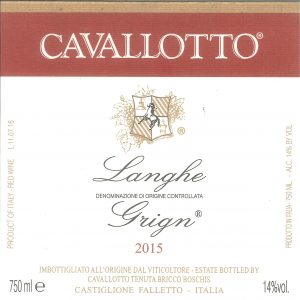 100% Grignolino sourced from 0.5ha of 40 year old vines with west-southwest exposure at an elevation of 285 meters above sea level. Aged completely in steel for a period of about 8 months, the wine offers up the density of fruit while staying light on its feet. 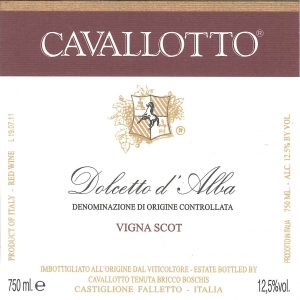 100% Dolcetto grown in calcareous clay soils. Maceration on the skins for 7 days in steel vats, maturation in stainless steel tanks for 6 months, followed by a further 6 months in cement.

WA 90: “The 2016 Dolcetto d’Alba Vigna Scot reveals a thick and darkly concentrated appearance. The bouquet is layered and rich with dark fruit, spice, pipe tobacco and pressed rose. This Dolcetto d’Alba will be released in June. Fruit comes from a two-hectare parcel and the wine is made with submerged cap in tanks with punch downs for three days. It is aged in large oak casks for six months.” 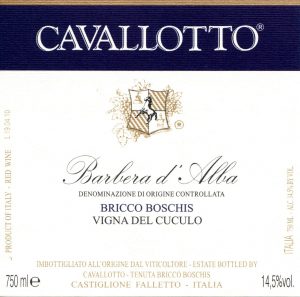 100% Barbera grown in calcareous clay soils with west-southwest exposure. Maceration on the skins for 15 days in steel vats before aging takes place in oak casks for 24 months.

WA: 91+: “Cavallotto’s 2015 Barbera d’Alba Superiore Vigna del Cuculo is a beautiful wine with well-controlled acidity and plump blackberry flavors. The wine presents a full and generous flavor profile with dense primary fruit and balanced flavors of savory spice and flint. Winemaking sees fermentation with semi-submerged caps and punch-downs for up to two weeks. The wine ages in large Slavonian casks in the family’s ancient cellars for two years. Barbera from around the region shows fantastic results in the warm 2015 vintage. This wine is a prime example.” 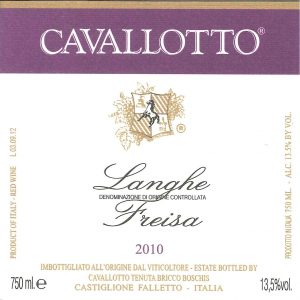 100% Freisa grown in calcareous clay soils. Maceration on the skins occurs in steel vats for 5 days with frequent pumping over of the must for extraction. Wine is matured in Slavonian botti for 12 months before bottling. 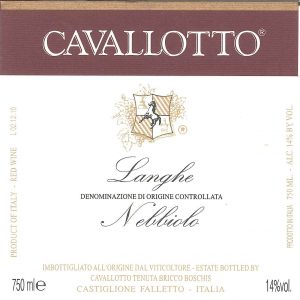 100% Nebbiolo from Bricco Boschis (including Vignolo and San Giuseppe), harvested during the second week of October. The grapes were fully de-stemmed. Fermentation begins with indigenous yeasts in the traditional style – with a semi-submerged cap using punchdowns and pumpovers for 18-30 days. Malolactic fermentation occurs in cement tanks during the spring following the harvest. Cask aged for 18 months in Slavonian oak botti. Bottled in late 2015 and released after a minimum of 6 months in the bottle.

WS 91: “A mix of sweet floral, cherry and strawberry flavors is offset by tobacco and underbrush notes in this firm, athletic red. Fresh and chalky on the long finish.” 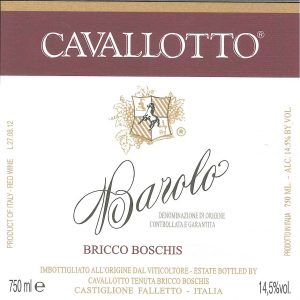 100% Nebbiolo grown in calcareous clay soils. The wine is fermented in steel vats, with maceration on the skins for 20 days. Wine is then aged in Slavonian-oak casks of various capacity for 3 years and 6 months.

2013: WA 96+ “Cavallotto is on a roll with some very impressive new releases. The 2013 Barolo Bricco Boschis is a tremendous effort that has an edge on the excellent 2010 vintage in my view. The wine shows a beautifully exuberant but elegant bouquet with the ethereal and undertone fruit and spice aromas you get with Nebbiolo. Although the wine is never overdone, it does show silky persistence and a long finish that comes from the noble nature of the tannins and the wine’s textural finesse. Yet, it is playfully deceiving in a way because behind that polished grace, it delivers impressive depth and power.”

2012: WS 94 “A firm, dense backbone of acidity and tannins shores up this red’s cherry, strawberry, mint, tobacco and iron flavors. A beam of succulent acidity extends the long, spicy aftertaste. Best from 2020 through 2036. 1,811 cases made.” 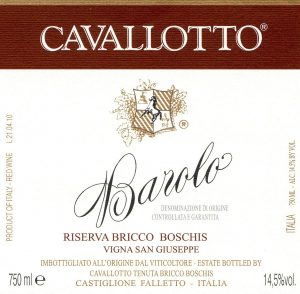 100% Nebbiolo grown in calcareous clay soils. The grapes are macerated on the skins in steel vats for 26 days; the wine is then aged in Slovenian oak casks of different capacity for 4 years.

2011: WA 95 “The Cavallotto 2011 Barolo Riserva Bricco Boschis Vigna San Giuseppe is an exceptional wine that really shows the best of Castiglione Falletto, home to some of Barolo’s most consistent and age-worthy wines. This bottle offers enormous complexity coupled by power and linear, classic lines. Maceration stopped at 20 days, otherwise the winemaking team feared the results would be overdone and too bold. The bouquet opens quickly to reveal dark fruit, spice, anise seed and licorice. The effect is ethereal and lasting. It would be hard to pin this wine down as being from the warm 2011 vintage in a blind tasting. The acidity is fresh and nicely folded into the background.”

2010: WS 97 “An old-school style, this complex red features an array of cherry, berry, leather, tobacco and underbrush flavors, backed by a dense, beefy structure. Long and powerful, with a savory, saline aftertaste. Shows ample fruit up front, but should be better in two to three years. Best from 2019 through 2036. 550 cases made.” 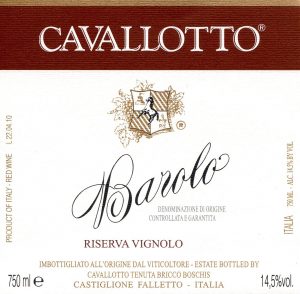 The 10,700 Nebbiolo vines in the Vignolo vineyard, facing south and south-west, were planted in two years: 1948 and 1966. The soil in which they grow is calcareous marl. The grapes themselves are macerated on the skins for a long time – about 26 days – in stainless steel vats. The wine is then transferred to traditional casks of Slavonian oak where it is left to mature for about 4 years. Finally, it spends up to a year continuing to mature in the bottle before it is released.

2011: WS 93 “2011 Barolo Riserva Vignolo is a dark and succulent expression that showcases the characteristics of the warm vintage. The bouquet puts forth a compelling set of dark fruit characteristics with Morello cherry, dried blackberry, mocha and delicate accents of sweet spice. The vineyard team was careful to keep the clusters under the shade of the canopy for as long as possible during the summer months to prevent the grapes from ripening too fast or bleaching their color pigments. The results are very nice indeed.”

2010: WS 95 “Sweet cherry and currant fruit combines with eucalyptus, tobacco, leather and tar flavors in this firm, sinewy red. In the traditional style, with plenty of underbrush, saline and tannic components, finishing long and savory. Best from 2019 through 2035. 510 cases made.”