Please remember your local bars and restaurants during this debilitating time for the hospitality industry and its workers!

Many businesses have pivoted to offer spirits and cocktail delivery while shuttered to in-house service; please check in with your favorite watering holes to see how you can support!

Though our daily lives have shifted considerably, our love of cocktails remains something of a true north during uncertain times. Kitchen cocktailing allows the opportunity to explore both conventional and unusual ingredients, preparation methods, and style preferences. Best of all, these explorations result in delicious drams that we can cheers to our friends and loved ones in virtual happy hours reaching across the globe. For the next several weeks, your friendly Skurnik Spirits Team will provide examples of what we’re whipping up at home while delving into thoughts on interpreting classic templates and utilizing your pantry.

At its best, the ritual of cocktail-making is an act of intention—a striving towards balance, pleasure, and an almost subconscious gesture of goodwill towards the recipient. As you adjust your drinking rituals in this new landscape—as we adjust ours—here’s wishing you glasses full of goodwill.

We begin this week with a contribution from Spirits Team member Krista Farrell: 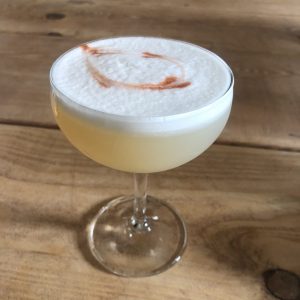 Combine ingredients in a mixing tin. Shake without ice for approximately 10 seconds to combine ingredients and emulsify the aquafaba. Add ice and shake. Strain (double-strain, if possible) into a chilled glass. Garnish with a few drops of Angostura Bitters.

*Simple Syrup: equal parts (by volume) fine, white sugar, and water. No need to heat; Simply whisk together until incorporated. A blender works, too! To check incorporation, rub a little syrup between thumb and forefinger. If you can’t feel any granules of sugar, the solution is fully incorporated.

The classic sour cocktail typically is constructed of three components: spirit, citrus and sweet. The Royal British Navy is believed to have pioneered the sour cocktail during their time in the Caribbean when they were known to mix their rum rations with lime juice and sugar to make navy “grogs.” The citrus helped to prevent scurvy and malnutrition during their time at sea, eventually bringing their libation to shore. The later addition of egg white to the classic template, making it a “silver” sour, adds a creamy and frothy texture.

BUT A SILVER SOUR WITH BEANS?

In 2014, Joël Roessel, a French musician and gastronomist searching for a vegan alternative to egg white, found that liquid from cooked chickpeas had the same properties as egg whites when whipped. The slurry was coined “aquafaba” for Latin words “water” and “bean.”

If you have eggs handy, make two cocktails: one with aquafaba and the other with the substitution of one egg white. Observe differences in texture and level of froth. Does one version complement the whisky better than another? Does the perceived level of sweetness change between the two?

“For the Self-Quarantine Sour” I did a dry-shake with cane sirop, lemon juice, whisky, and aquafaba for 10 seconds. I happened to have J.M Cane Sirop on hand, but simple syrup will do!

Make two cocktails, one with cane syrup and one with simple. Taste side by side to observe differences in mouthfeel, balance, and depth of flavor. Do you have a preference?

I used somewhat fancy 1-inch-cube mold ice… because that’s the ice in my freezer. This required a longer and harder shake than usual (think 20 seconds vs. 10). If you have more standard and less dense ice in your freezer, you will require less shaking time as it will dilute much quicker. I strained into a chilled coupe (because I had one) but this is survival mode… any damn glass will do. But please chill it, if you can!

Place a few drops (not dashes) of Angostura bitters on top. As a toothpick-less household, I used the bottom of a match stick to make heart designs with the bitters. Simply drag the match stick lightly through the center of the drop of bitters. Plenty of opportunity here to get creative with your design!

This accidentally vegan cocktail has the added bonus of resulting in an open can of beans. Make something nutritious to pair with your bean flip!

If you use egg white instead of aquafaba, save that yolk! It will be perfect for baking or added to your next batch of scrambled eggs for a rich texture more akin to that of farm-fresh eggs.

Even the most baroque cocktails are often built on the structure of a classic cocktail template.

Although no template is full-proof, starting with a tried-and-true structure makes the road to achieving balance that much shorter, whether sticking with the classics or switching out ingredients in the spirit of experimentation. 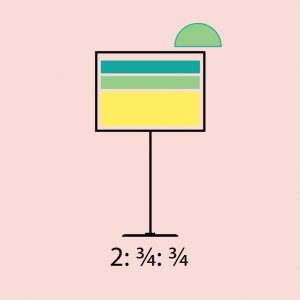 Variables such as richness of your sweetener, spirit proof, and tartness/sweetness of your citrus may require “massaging” the template, but this is a great starting point. Today’s addition of aquafaba—which contains no alcohol and negligible sugar—works here as a lengthener, providing volume and texture without affecting the initial template.

That having been said, the addition of any new ingredient may alter the flavor of the overall drink. Does the drink taste thin or dry? Did sodium in your bean juice knock balance out of whack? A tiny splash of added sugar may do the trick…