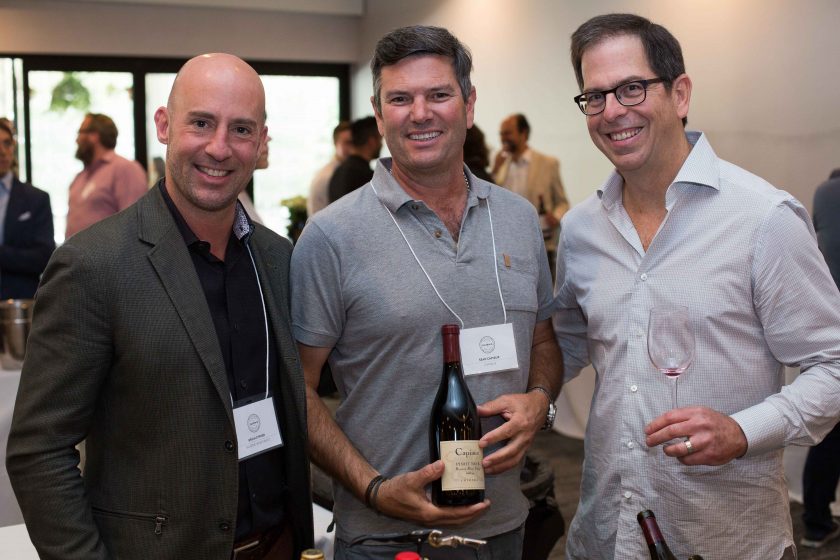 Sean Capiaux is one of those rare individuals who knew his path into winemaking before even heading off to college. With three decades of experience under his belt, Sean has established an extremely impressive winemaking career and has worked with several prominent wineries around the globe.

Sean’s winemaking style is a blend of classic and contemporary; cutting edge equipment and meticulous processes are paired with hands-on and minimalistic winemaking techniques. His philosophy is to produce wines that express the unique terroir from which they came. The fruit and the dirt lead the way. In short, his goal is to make honest wines.

Sean recently spoke with Erica Skurnik, a member of our USA Team here at Skurnik, about his upbringing, experiences, and winemaking philosophies.

SKURNIK WINES: Can you tell me a little bit about your upbringing and how you got into the wine industry?

SEAN CAPIAUX: So, I’m first-generation– my father immigrated from France in the late ‘50s. He was born in Lille which is along the Belgium border, and my mother is also an immigrant, born in Sweden and grew up in Spain. My brothers were born in Europe before they came here.

My father’s grandmother was from the Loire Valley and her family had a history of working in vineyards, but it wasn’t really their primary career. My dad was actually an astrophysicist with a Ph.D. in Plasma Physics and a Master’s in Mathematics from the Zurich Institute of Technology, and was recruited to come over to the U.S. to work in the aerospace industry.

From when I was a young kid, we drank wine at home– it was culturally part of our lifestyle. My dad would mix wine with water and let me taste it, which is how I got my introduction to wine. My friends growing up didn’t drink wine at home, so I always thought that was interesting.

When I turned 18 and was heading off to college, I had no idea what I wanted to pursue, and thought, “Well, what do they call people who do wine?” I looked it up, and at that time it was Davis or Fresno, so I decided to go to Fresno, declared an enology major straight out of the shoot, and thought I’d give it a shot.

SKURNIK WINES:
You have worked at several esteemed wineries around the world, can you walk me through how you got to where you are now?

SEAN CAPIAUX: I did an internship at Jordan Winery in the Alexander Valley in ’88, and they hired me full-time in ’89 after I graduated college. Then, in 1990, while I was still young and single, I decided to do a stage in Western Australia at Houghton Winery.

When I came back, I got a job at Pine Ridge Winery and worked there for three years, starting out as enologist and then became assistant winemaker. When Gary Andrus was looking to sell the winery, I took an opportunity to move to Peter Michael Winery in 1992. Helen Turley had just left, so Mark Aubert was promoted to winemaker and hired me as his assistant winemaker.

I was at Peter Michael for almost five years, until right before the ’96 harvest. At that time, Peter Michael was really pushing the boundaries; it was the beginning of the unfiltered Chardonnay, all barrel-fermented, all malolactic, all new wood – we experimented with a lot of that stuff.

In 1994, I made my first vintage of Capiaux Cellars at Peter Michael. We were a very Burgundian house, but we didn’t do Pinot Noir. The question always came up: we’re known for Chardonnay, but why aren’t we doing the other Burgundian varietal? So, we started looking at vineyards and I took the opportunity to ask Sir Peter if it would be alright to make a few barrels of Pinot Noir for myself. I did my first four barrels from the Iund Vineyard. I was almost a guinea pig for Peter Michael to see how our equipment worked with Pinot Noir before they ever made their own.

It was during that time that my wife was accepted to a few different medical schools, and we realized that we needed to move somewhere with a winemaking region so that I could get a job. So, she decided on Cornell, and I went out to Long Island to look for work. I met the Macaris, who had just finished their winery but hadn’t yet put out a commercial wine, and they offered me a job. Over the next couple years, I worked at Jamesport and then Schneider Vineyards, all while keeping up the Capiaux brand in California– true bi-coastal winemaking! I would go do harvest in California for a few weeks, and then go back and do harvest in New York.

While I was in New York, at the end of 1999, I was introduced to the O’Shaughnessys who were getting ready to build a winery, and they brought me on as winemaker. The first vintage of O’Shaughnessy was 2000, which we custom-crushed, and I moved my family back to California after 9/11. When the winery was completed in 2002, I moved O’Shaughnessy and Capiaux production up to the new facility.

SKURNIK WINES:
Do you use similar winemaking philosophies with Capiaux and O’Shaughnessy, or are they treated completely differently?

SEAN CAPIAUX: The two brands are completely different. Every grape variety has to have its own philosophy or vein that you’re working in– and my goal is to make wines that are typified by the region and terroir. Philosophically, we have to come up with a winemaking style that will work with our region and our ripeness. 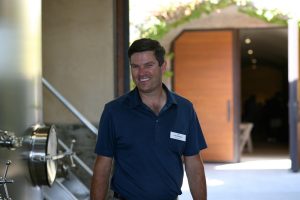 We certainly have our own way of making Napa Bordeaux varietals and I’ve been doing this for 31 years, so things have changed over time. I was lucky that I started so early, as it’s an experience-based business. There’s been an evolution in style over three decades of winemaking; you go back to the early ‘80s when we were making wines much more conventionally: picking at a certain number of brix, making wines very clean, manufactured, or innocuous. Then things got super ripe, unfiltered, viscous… and now, things have retracted back to more balanced wines. Napa winemaking is getting into a really nice stride now.

With Pinot Noir, most of my grapes are coming from the Russian River. I love the Russian River; I truly think it’s one of the best regions in America to grow Pinot Noir. My winemaking style for Pinot Noir has evolved too– a lot is based on the material that you get, the equipment that you have, the trends that happen. You want to make a certain statement with the vineyard. My recent wines have been changing;  with the new facility comes different types of processing capabilities, so I’ve been learning how to manage macerations and other processes a lot better. But I’ve worked with a lot of the same single vineyard sites for 20+ years– Widdoes, Garys’, Pisoni, Wilson – and there is a lot of consistency and longevity in my wines.

SKURNIK WINES:
How do you think your 30+ years of experience helps you in your day-to-day?

SEAN CAPIAUX: Well, with so much experience, I know what is good and what is bad. A lot of mistakes are made by young winemakers because, well, wine doesn’t taste very good when it’s young! It’s fermenting, it’s bitter… a lot of decisions that are made during maceration and fermentation don’t need to be made and actually harm the wine. It’s good to be able to have that foresight and know that the process we’re using is solid, and the stage the wine is in is natural. It’s good to know how to decipher between a true defect and a temporary problem, and be able to guide wines through their processes. Less is more.

SKURNIK WINES:
Would you say there are any notable characteristics in your wines that make them “Capiaux” wines?

SEAN CAPIAUX: I think the Pinot Noir has gone through huge swings and changes. Pinot Noir is a very difficult varietal, a low phenolic varietal. If you hit 80% extraction with Cabernet, you’re okay– you can have tons of color and tannins and you can have some slip-ups and people aren’t really going to notice. But with Pinot Noir, if you really don’t nail it, the wine will show the flaws. A lot of producers have used different processes to try and change that, to try and trick wine with technology and adjuncts, which is not very honest winemaking. What I’m proud of is that we’ve been very honest and true with our winemaking. It’s really about finding good sources, using good processes and techniques, having knowledge and understanding, and making true wine.

SKURNIK WINES:
Is there anything you’re looking forward to regarding the future of Capiaux and O’Shaughnessy?

SEAN CAPIAUX: Well, both my kids are in wine and viticulture college! My daughter just started her first year at CalPoly, and my son is a junior at Fresno State in the enology program. I’m excited for them to come back and be part of the industry, and eventually one day maybe they’ll come and work for me. 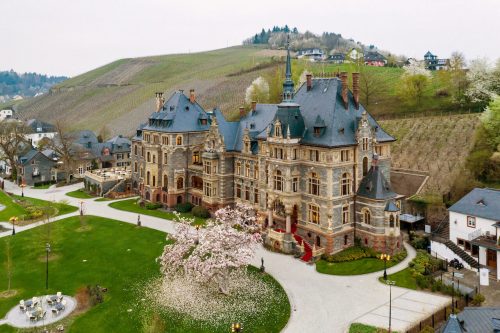 Introducing Schloss Lieser & the Haag Family: Mosel Rieslings with Complexity & Precision
Schloss Lieser is known as one of the most striking buildings in the Middle Mosel. This beautiful Neo-Renaissance castle was built in 1875 for petroleum magnate Eduard Puricelli on a former church site. Clemens Freiherr von Schorlemer-Lieser, a German politician...
Read More 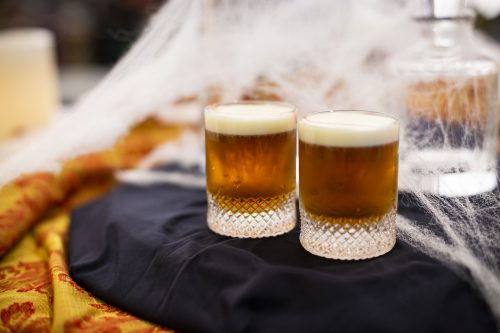 Spirits and Specters at the Plaza Hotel
Every city is full of stories, written in the architecture of its streets and buildings. Some of these stories speak to the inspiration and ingenuity inherent in building a pulsing infrastructure of steel, stone, and human interaction. Equally inherent, however,...
Read More