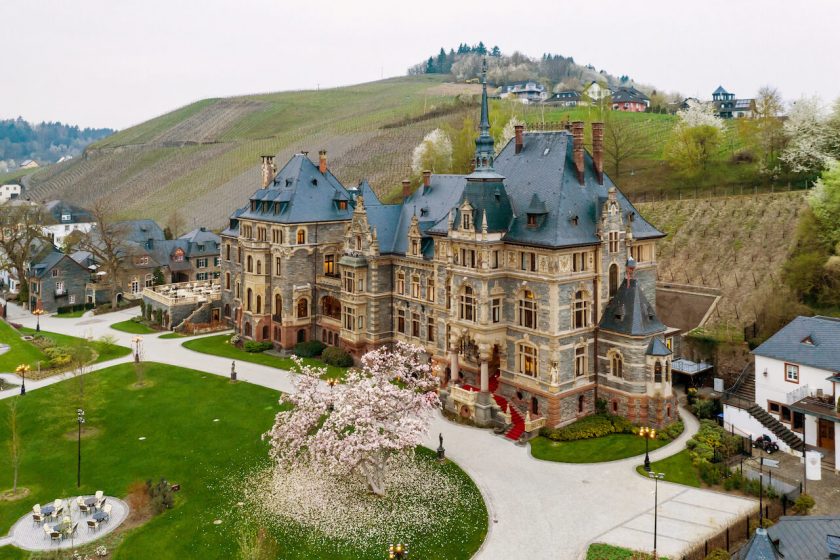 Schloss Lieser is known as one of the most striking buildings in the Middle Mosel. This beautiful Neo-Renaissance castle was built in 1875 for petroleum magnate Eduard Puricelli on a former church site. Clemens Freiherr von Schorlemer-Lieser, a German politician and Prussian Minister of Agriculture, married Puricelli’s daughter and sole heiress Maria Puricelli, and took up residence in the Schloss in 1880.

Since then, the Schloss Lieser has passed through a number of different hands and has remained a political center even in the years after Maria and Clemens moved in. It is truly a building that is rich with history.

From 1904, Schloss Lieser served as the principle cellar and press house for Freiherr von Schorlemer’s prestigious and far-flung hundred acres [or “45 hectares”] of Mosel and Saar vineyards, most of which were shed in the 1970s when the estate changed hands and slid into a long decline. Thomas Haag, from the venerable Mosel wine-making family Weingut Fritz Haag, and his wife Ute took up the position of Head Winemaker and Director of the estate in 1992. At this time the estate was just six hectares, located almost entirely in the Grosse Lage (Grand Cru) Lieser Niederberg Helden.

After working at the winery for five years, by which time they had already restored much of the estate’s reputation, Thomas and Ute were able to purchase the property in 1997 and began making immediate investments in the cellar and vineyards. “This was a slow process,” said Thomas. Each year, rather than taking the profit out of the winery, the Haag’s reinvested and started purchasing other Grand Cru vineyards in the Mosel. Early on, they purchased a small parcel of Graacher Himmelreich, but it was not until the latter part of the 1990s that they started to truly expand the domaine. In 2002, the Haag’s purchased prime parcels in the Brauneburger Juffer and Brauneberger Juffer Sonnenuhr, expanding their holdings to four Grosse Lagen or Grand Crus. 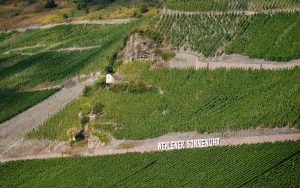 Thomas’ father Wilhelm Haag is an important figure in German wine and the owner of Weingut Fritz Haag in Brauneberg. Wilhelm took over the estate from his father in 1957 and retired in 2004. As the eldest son, Thomas was expected to take over the family domaine. “As we had already begun here at Lieser and had worked very hard on this project, we decided to stay,” says Thomas. His brother Oliver took over the family domaine in 2005 and continues to run the outstanding Fritz Haag estate today.

From the time that Thomas announced that he would stay and develop Schloss Lieser, the estate would enter a period of intense investment and growth, adding more Grand Cru sites to their already impressive holdings. Thomas and Ute added Wehlener Sonnenuhr in 2014, Piesporter Goldtropfchen in 2016, and Graacher Domprobst in 2018. In 2016,  the family signed a nine-year lease for parcels in the famed Bernkastler Doktor:

You can’t buy land in the Doktor, so the next best thing is to rent for a period of time where you can bring the vineyard into your own viticultural philosophy.Thomas Haag 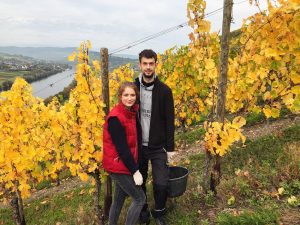 Today they own 25 hectares of eight Grosse Lagen (Grand Crus) spread over 185 different plots. Schloss Lieser enjoys the topmost rating in Germany’s several wine guides, the most widely respected of which, the Vinum Weinguide Deutschland, rates only two estates in the Greater Mosel five stars out of five: Schloss Lieser and Egon Müller!

“Everything is handpicked,” says Thomas. “The goal is always to do as little as possible in the vineyards in terms of intervention.” Lara and Niklas represent the next generation of Schloss Lieser will join their parents at the estate. Both Lara and Niklas studied at Geisenheim University in the Rheingau, the top wine-making school in Germany. Niklas has two years left at Geisenheim and is focused on production, while his older sister Lara has already graduated and is working at the estate.

A goal of ours, with our children, of course, is to be 100% organic in our production in the coming years. This wouldn’t be possible if we didn’t have both of our kids at home. 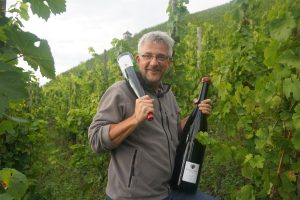 Harvest is the most important thing. It can last from 4-8 weeks depending on the vintage. We pass through the vineyards 3-4 times in each parcel. Really, you must be in the right vineyard at the perfect time. This comes from long experience but also some luck, of course! Quality is always decided and selected in the vineyard.

In the cellar the philosophy is very clear: We make the wines with the highest quality fruit we possibly can. Only top sites can produce great wines. In the cellar, the fermentations are always spontaneous. This is how we like our Mosel Rieslings and we feel it’s an important part of our style. We almost always use stainless steel, except for cooler vintages where we employ some oak. We don’t do macerations and we strive to do our pressing when it’s cool. We press always with low pressure as we want the wines to be fine and elegant, preferring the structure of the wines to come from extended lees contact rather than maceration or phenolics from pressing. We don’t filter the juice and do a sedimentation as we want to see relatively clear juice going into the fermentation tank.

The wines ferment for as long as they need, but often fermentation takes about 6-10 weeks. After fermentation, we leave the wines on the gross lees for as long as needed. We taste the wines all the time during this period and the decision for racking is always done by taste, really when I am thinking that they are ready. After racking the wines spend three to four months on the fine lees. We decide when to rack and bottle, again, according to how the wines taste. The wines are made in very reductive conditions and so some wines take longer to be ready for bottling than others. We make wines for drinking but also for aging, so it’s important not to rush them. I always use native yeasts and have for decades. To me, the native yeasts bring more complexity, more texture, but they don’t lose the clarity that makes the wines of the Mosel so special.Thomas Haag

We are very pleased to announce that we will be working with Schloss Lieser as the exclusive national importer.

We welcome the Haag family and look forward to sharing these exceptional, singular wines with you. 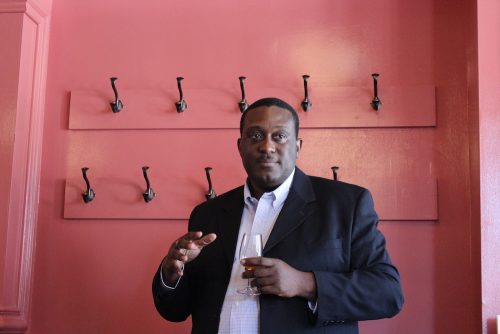 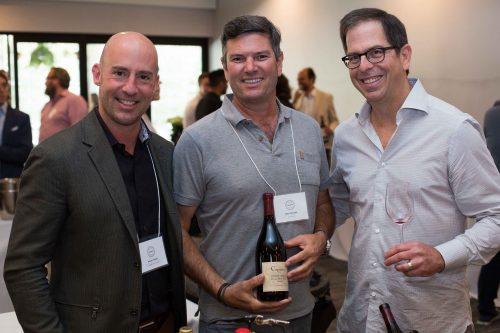 “In His Own Words” An Interview with Sean Capiaux, Winemaker at Capiaux Cellars and O’Shaughnessy Estate Winery
Sean Capiaux is one of those rare individuals who knew his path into winemaking before even heading off to college. With three decades of experience under his belt, Sean has established an extremely impressive winemaking career and has worked with...
Read More