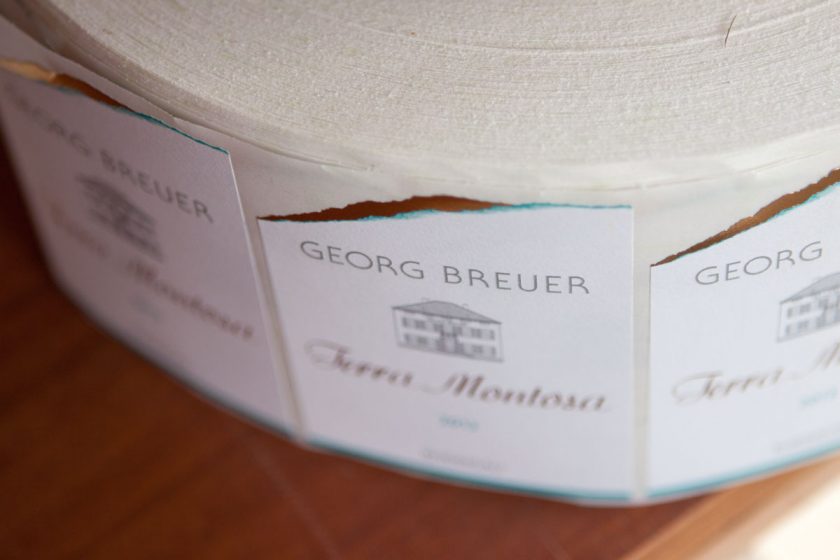 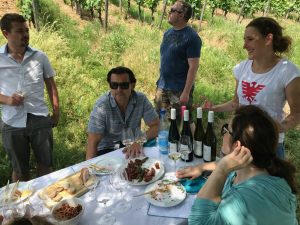 Weingut Georg Breuer looks back on 130 years of history, beginning in 1880 when it was founded by the Hillebrand and Scholl families. Peter Breuer purchased the property in the early 20th century, passing it to his son Georg (1910-1982) several years later. Georg renamed the winery, expanded the holdings, and started shipping wines to England and other European countries, building a reputation for the estate and the wines of Rüdesheim am Rhein. Georg’s sons Heinrich and Bernhard Breuer further expanded the holdings in Rüdesheim and Rauenthal to 15 hectares.

Today, Theresa runs the estate with longtime manager and icon in the region, vineyardist Hermann Schmoranz and cellar master Markus Lunden. The estate now spans 40 hectares, with a majority of the holdings located in the three greatest Grand Crus in Rüdesheim am Rhein– Berg Schlossberg, Berg Roseneck and Berg Rottland and the Monopole site, Nonnenberg in Rauenthal on the western side of the Rheingau. In 2019, Theresa took over parcels in 5 different vineyards in Lorch, around the bend in the Rhein, north of Rüdesheim. These three distinct villages are some of the very finest in the Rheingau, bookending the region from furthest north-east to west. 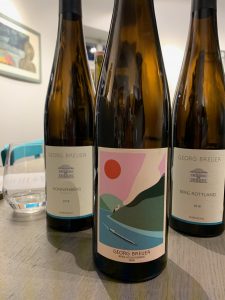 The vineyards are farmed using organic methods and the winery is certified sustainable by Fair N Green. In the top sites, yields are reduced to between 15-25 hectoliters per hectare with 45hl/ha for the Estate and Village level wines. Physiological and “aroma ripeness” are more important than must weight and the grapes are picked when Hermann, Theresa, and the team feel the fruit is perfect. Botrytis is avoided as the majority of the production is dry. Fermentations are natural or started with pied de cuve; fermentation and élevage are in large used barrels for the top wines and a mix of barrel and steel for the estate wines. The winemaking at this domaine is very simple and the results from these exceptional vineyards are clear – these are among the very finest wines in Germany.

To understand how the process at Breuer works, it’s important to understand the three villages that Theresa produces wine from.  Before getting into the specifics of the individual vineyards, it is equally important to talk about the hierarchy of quality at this estate. Though Breuer is not currently a VDP member, the wines follow in the same general pyramid that the VDP has adopted, with Burgundy as its model, except for 1er Cru or Erste Lage, which Theresa skips over in favor of making a blended steep slope wine, which will be discussed below. Georg Breuer left the VDP in 2000 after a disagreement regarding the vineyard classification that he actually started with the late Graf Erwein Matuschka-Greiffenclau of Schloss Vollrads, a tragic figure in the world of wine. At Georg Breuer, for Riesling, there are four classification levels. Everything is always hand-picked and farmed the same way (apart from yields, which are naturally lower in steep vineyards with old vines) so the distinctions come from place rather than production. 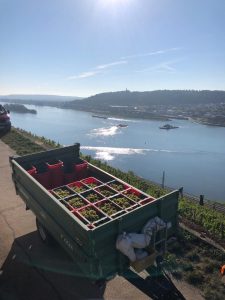 The “basic” estate Rheingau regional wines are a blend of different sites across all three villages. These wines are Sauvage, a dry Riesling with “wild” aromatics, which also refers to the natural ferments here, and Charm, a wine with just a touch of residual sugar making it a bit fruiter and very approachable. The Village wines come from single vineyards in each of the villages and are a blend of sites where the parcels either are too young or the vineyards are not quite good enough in her estimation to be bottled as a single vineyard.

The village wines (also called Ortswein, if you are following the VDP nomenclature) are about a 50/50 blend of fermentation and aging in large, neutral Hösch oak stückfass (1,200L) and stainless steel. All of the single-vineyard wines are fermented and aged exclusively in large neutral oak. For the first two levels of quality (basic and village), the wines are about vineyard and sourcing, showing regionality with the basic wines and more specific village character in the Ortwein.  The next level above Village is Terra Montosa, which is Latin for “steep land”. Terra Montosa is made from steep, single-vineyard parcels and the blend is always made with Theresa, Markus, the cellar master and winemaker, and Hermann Schmoranz, who is responsible for the vineyards. This wine has been produced since the 1990 vintage and is a gorgeous wine in its own right. Wines that do not quite “fit” into the blend of Grand Cru, single vineyards make up the blend of Terra Montosa, but very important to note that sometimes an excellent wine that doesn’t work in either the blend of single-vineyard wines or in Terra Montosa will be blended into the village wine, depending on where it comes from. The village wines come from single vineyards that do not meet the standard for the Grand Cru single-vineyard wines or the Terra Montosa but are still of excellent quality.

Lastly, the Grand Cru single vineyard wines are produced in small quantities from the best parcels in only the best sites in each village. The blending is always done by the trio of Theresa, Markus, and Hermann and it is a long and complicated process. The single current vineyards are Rüdesheimer Berg Schlossberg, Berg Rottland and Berg Roseneck, Rauenthaler Nonnenberg and Lorcher Pfaffenweis. 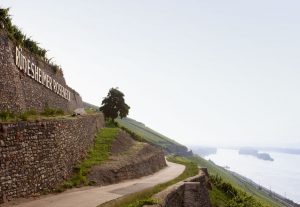 Rüdesheim is one of the most famous villages in all of Germany, for its picturesque old town, tourism, and of course monumentally great wines which some from the Rüdesheimer Berg, which sits directly on the Rhein. The official name of the village, in fact, is Rüdesheim am Rhein. This is where the majority of Theresa’s holdings are located: 25 of the 40 hectares that make up the estate located here. Soils here are mainly slate and tanus quartz, with some areas of loess deposits. Rüdesheim is also where the winery is located, including a newly constructed press house and cellar, which is being completed in 2021. Rüdesheim, with its Grand Cru vineyards, produces deep and complex wines that always show a sunny, ripe character. Berg Schlossberg, Berg Rottland and Berg Roseneck the three Grand Crus for this village, which also constitute part of the blend of Terra Montosa. The other holdings are in the vineyards of Bischofsberg, Drachenstein, Klosterberg, Klosterlay and Kirchenpfad, which generally go into the village Rüdesheim bottling, but some parcels here can be declassified into the Rheingau Rieslings, GB Sauvage and GB Charm. In addition, there are parcels in and Magdalenenkreuz that go into only GB Sauvage and GB Charm.

Rauenthal is an incredibly important village in the Rheingau, with iconic vineyards Baiken and Gehrn as well as the monopole for Breuer, Nonnenberg. This village was one of the most famous in the entire region 100 years ago when the aristocratic estates dominated not just the Rheingau but German wine in general. Rauenthal was associated with wineries of another era like von Simmern, Schloss Eltz and Kloster Eberbach. Today, a majority of these estates are no longer privately held and either owned by multinational groups or banks. Rauenthal’s soil is quite different than Rüdesheim, with a high proportion of mica-inflected phyllite soil, similar to the soil in the Abtei vineyard across the Rhein in the Nahe. This soil, with a proportion of sand and quartz as well as pockets of loess and clay, makes the wines from this village show a darker, more mineral character. The wines of Rüdeheim are the sunny treble notes, while Raunethal could be characterized as being more shadowy and bass notes. Breuer has two single vineyards here, the aforementioned Nonnenberg, which is owned entirely by Breuer, as well as Rothenberg. Nonnenberg is used for the Nonnenberg Grand Cru single vineyard wine as well as sections that may be blended into Terra Montosa and the Rauenthal village wine. Rothenberg is less steep, more east exposed while Nonnenberg is more south, with a higher proportion of loess and therefore is not produced as a Grand Cru single vineyard, nor does it go into Terra Montosa. Instead, this vineyard is used for the village Rauenthal wine as well as the estate wines.

In Lorch, Breuer farms five different single vineyards, Pfaffenweis Schlossberg, Kappelenberg, Krone and Bodental. So far, only Pfaffenweis has been made into a Grand Cru single vineyard wine, in the 2019 vintage. The vineyards are characterized by the warmth of the Rhine, shallow, stony slate, and quartzite soils in the steep slopes and the loess in the lower slopes. There are also a number of natural depressions, rocks, and dry stone walls, which keep winds away and store the heat from the sun. In the steepest slopes, some parcels go into Terra Montosa and the village wines, while the sections with deeper loess soil go into the Rheingau Charm and Sauvage wines. So far, Lorch feels like it has some of the warmth and generosity of fruit that Rüdesheim has, but with a bit more of an angular backbone, more sharply focused than the village wines from Rauenthal. 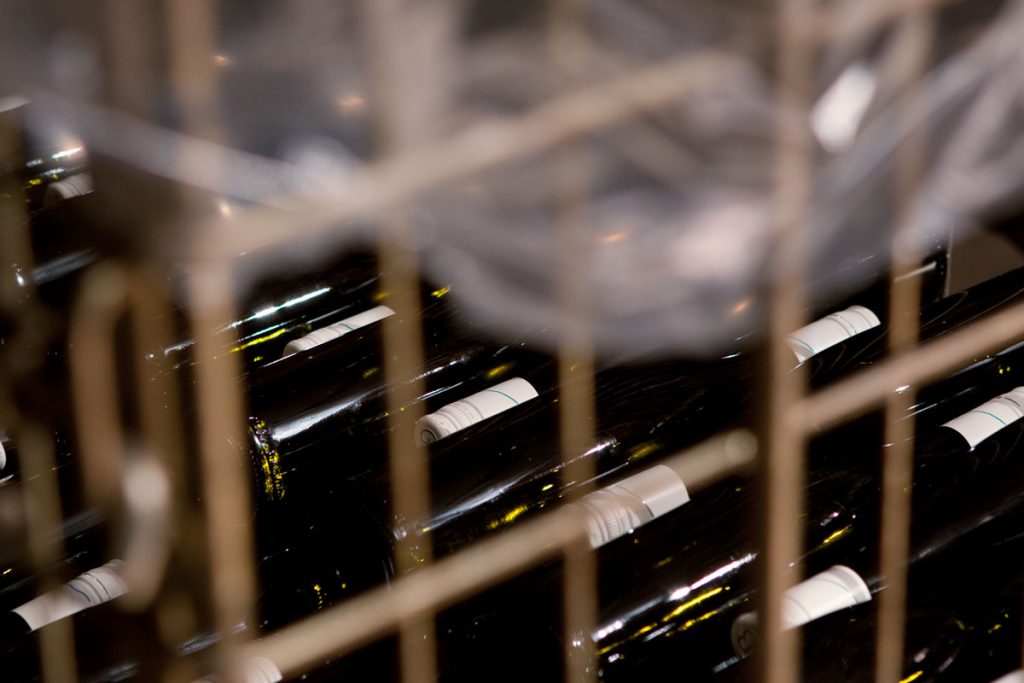 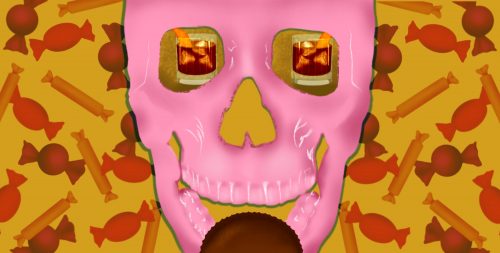 Pairing Candy with Cocktails: Spooky Edition!
This Halloween, why not blow your inner 12-year-old’s mind by dovetailing the holiday’s most nostalgic candy flavors with complementary or contrasting spirits? These compelling flavor combinations can add dimension to classic cocktails and candies alike. And who doesn’t like to...
Read More 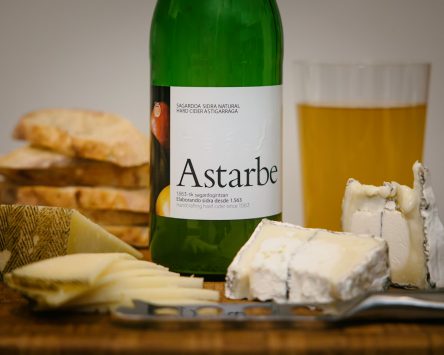 Pairing Food with Cider: A Fresh Take on Fall Flavors
The air is crisp, the leaves are changing – folks we are in cider season. This past weekend we took home a few of our favorites to see how well they pair with food. The results were eye-opening (and delicious!)...
Read More


Couldn’t get tickets to the Era’s tour? We’v