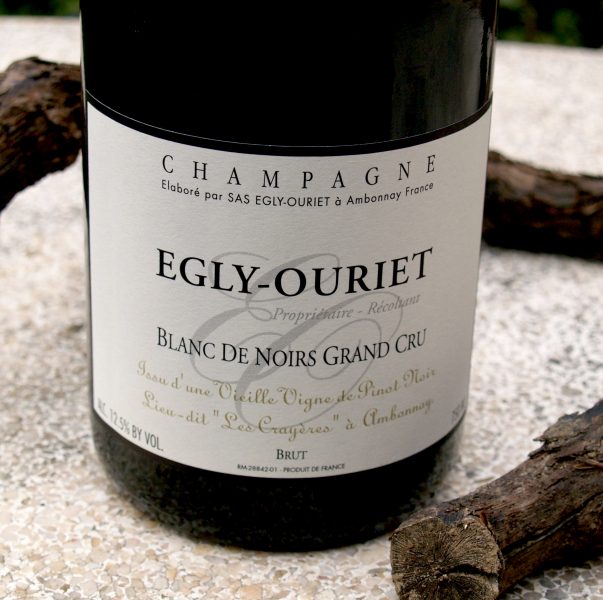 As difficult as it might be to imagine, there once was a time when the term ‘Grower Champagne’ was not an integral part of the wine drinker’s lexicon. It was a time when the Champagne mind share was dominated by the ubiquitous Grand Marques. For the musically inclined, they were perhaps the Milli Vanilli of their era – nice presentation, lacking in substance, and completely unavoidable. Even in those commercialized times, there were many small growers still plainly going about the only business they and their families had ever known, making world class wines the public did not yet know it needed. Thanks to these tireless artisans, the world has come to recognize the art form that we now lovingly refer to as ‘Farmer Fizz.’ One such humble luminary, who took his lovingly farmed and exquisitely placed Pinot Noir to Champagne’s absolute heights, is the venerable Francis Egly, of Egly-Ouriet.

“Egly was among the first producers to emerge in the grower Champagne movement. As such, he is perhaps sometimes overlooked in favor of some of his younger colleagues. Make no mistake about it, though, these wines are at the very top of the pecking order in Champagne today.” – Antonio Galloni

Francis is the fourth generation of the Egly family to make wines from their exceptionally located, old vine vineyards in the Grand Cru village of Ambonnay – home to some of the greatest Pinot Noir that can be found in all of France. Francis took over from his father Michel in 1980, with the intent and commitment to take these already revered Pinot Noir dominant Champagnes to the absolute apex of quality. His first step in the process was to farm his vineyards using organic practices, at a time when such a decision was nowhere close to being in fashion. Yields were reduced, and regular ploughing was employed. Walking through these old vine, south-facing vineyards in Champagne’s homeland for great Pinot Noir, the question that frequently comes to mind when tasting the wines changes from “how are these wines so good?” to “how could they not be that good?”

All the fastidious and meticulous work in the vineyards would be for naught without equal attention being paid in the cellar. For anyone who has tried these wines, it comes as no surprise that Francis’s thoughtfulness naturally extends into his gorgeous winery in the heart of Ambonnay. Once the grapes enter his cellar, Francis makes sure to only allow for the gentlest possible extraction, of which he only keeps the purest first pressing (known as the cuvee). With the marvelous fruit that he harvests, it’s no wonder he would spare no expense in making sure every step from harvest to bottle allows for the purest expression of his hallowed terroir.

Qualitatively, these wines are not for the faint of heart. Whether you use the word powerful, intense, concentrated, or bonkers good, they are undoubtedly in a category of their own. This is of course no accident, for Francis believes deeply that complexity and structure comes not only from perfect fruit, but also from extended lees aging. This belief is felt throughout his lineup, with most of his wines undergoing a minimum of 48 months on the lees with some cuvees being aged for 100+ months! As Francis puts it, this is critical for expressing the terroir of his wines, lending the wines that much sought after vinous quality.

“If there are any Champagnes that fit the often-used description of ‘Burgundy with bubbles’, Egly-Ouriet’s would be the leading candidates.” -Peter Liem And this brings us to the thesis of why Egly is Egly. It is why those who have had every Champagne under the stars will still giggle with pure juvenile excitement when asked the simple question, “May I pour you some Egly?” Very few wines can combine layers upon layers of pure seduction with taught, tensile energy. Francis makes no secret of the fact that Burgundy is absolutely his model, going so far as to bottle at lower atmospheres so the bubbles do not obscure the immense quality of his base wine. When tasting the vins clairs out of barrel at the domaine, it’s clear why Francis takes every precaution to not hide or obfuscate this glorious juice – they are positively shimmering with richness and vibrancy. While many producers seek to create the most tight, racy, acid-driven wines possible, Francis continues to make wines that he feels not only contend with the best in Champagne, but with the best still wines from around the world.

The hallmarks of the great wines of the world are found in every single bottle of Egly-Ouriet; the purest expression of legendary terroir, minimal intervention in the vineyard and cellar, the potential to improve and develop for decades in bottle, and above all the ability to induce the quietest of contemplation. In fact, there may be no quieter place on Earth than the cellar of Egly-Ouriet, when tasting with the legend himself. It isn’t that people aren’t talking or glasses aren’t clinking, but rather with that first sip of Blanc de Noirs Crayères, sounds become completely extraneous to the interplay between your soul and a glass of wine. It’s the kind of silence that envelops only those that are in the presence of true, unequivocal beauty. 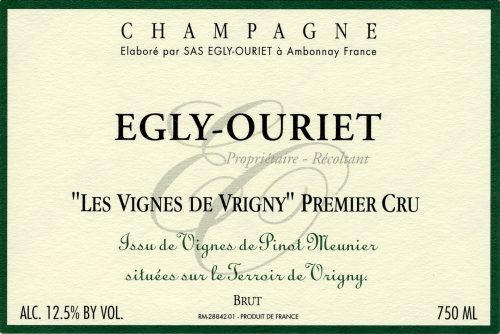 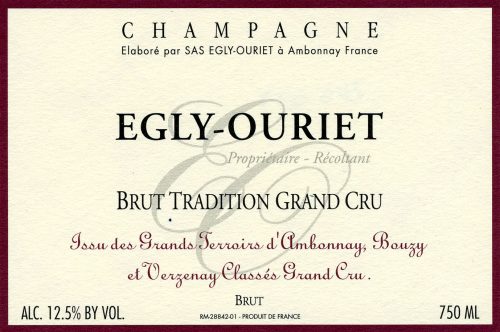 Egly-Ouriet Grand Cru Brut Tradition NV
70% Pinot Noir and 30% Chardonnay
90% from Grand Cru Ambonnay with the rest coming from Grand Cru Verzenay and Bouzy
Partly barrel fermented (about 50%)
50% 2011, 30% 2010, 20% 2009
Aged 48 months on the lees
VM:90 – “The NV Brut Tradition Grand Cru is superb and also a terrific introduction to the house style. Creamy and layered in the glass, with lovely aromatic nuance, the Tradition captures the generosity and resonance that is such a signature of the Egly-Ouriet Champagnes.” 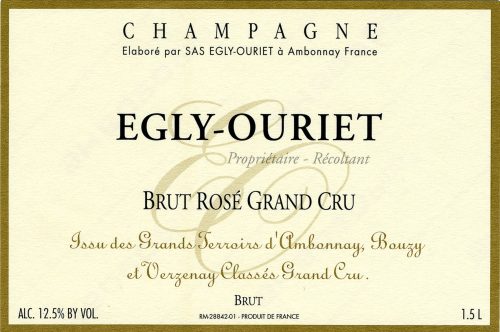 Egly-Ouriet Grand Cru Brut Rosé NV
70% Pinot Noir, 30% Chardonnay with the addition of 5% Ambonnay Rouge 2009
90% from Grand Cru Ambonnay with the rest coming from Grand Cru Verzenay and Bouzy
50% 2010 and equal parts 2009, 2008, and 2007
Aged 48 months on the lees
VM:90 – “The NV Brut Tradition Grand Cru is superb and also a terrific introduction to the house style. Creamy and layered in the glass, with lovely aromatic nuance, the Tradition captures the generosity and resonance that is such a signature of the Egly-Ouriet Champagnes.” 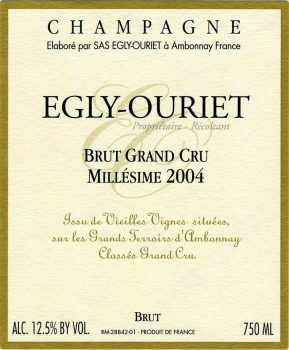 Egly-Ouriet Brut Grand Cru Millèsime 2005
100% from Grand Cru Ambonnay
75% Pinot Noir and 25% Chardonnay from 50+ year-old vines.
Vinified in barrels, 25% of which were new.
Aged 96 months (8 years) on the lees
A purely sensuous experience. This wine displays an absolute embarrassment of riches with its lushness and richness balanced with a minerality that is not saliva inducing, but saliva extracting. 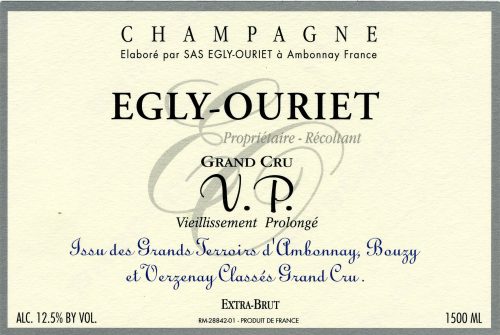 Egly-Ouriet Extra-Brut Grand Cru ‘V.P.’ NV
70% Pinot Noir and 30% Chardonnay
90% from Grand Cru Ambonnay with the rest coming from Grand Cru Verzenay and Bouzy
60% 2008, 40% 2006
V.P. stands for Vieillissement Prolongé, or extended aging – aged 84 months on the lees
VM:94 – “The NV Extra Brut V.P. Grand Cru emerges from old vines in Ambonnay, Bouzy and Verzenay. Powerful, ample and creamy, the VP possesses tremendous depth and richness. Vinification and aging in oak brings out the pure intensity of this fruit, something that 82 months on the lees draws out even further. A host of dried pear, smoke, menthol and spice build into the ample, expressive finish. This release is 60% 2008 and 40% 2006, two vintages that are naturally quite complementary.” 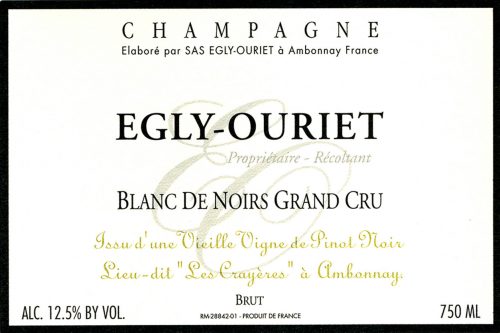 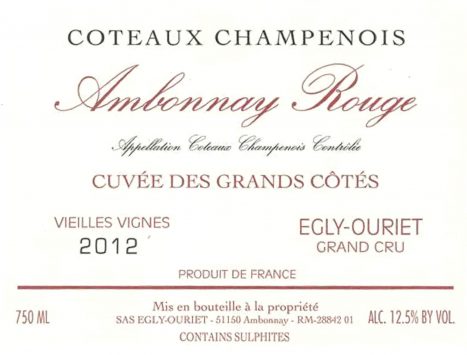 100% Pinot Noir
From a single, old vine parcel in Ambonnay
Vinified and aged in barrel (1/3rd new)
VM:91 – “From an old-vine parcel in Ambonnay, Egly’s 2014 Coteaux Champenois Ambonnay Rouge is about as good as it gets for still Pinot Noir in Champagne. Sweet red cherry, tobacco, spice, licorice and leather all flesh out in the glass. A wine of notable concentration and depth, the 2014 sets the bar for what is possible with still Pinot in Champagne. The new oak has been beautifully integrated and all the elements are in the right place.” 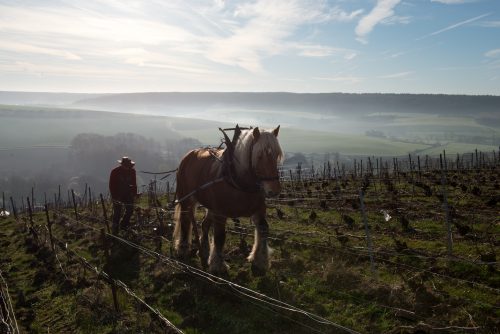 Moussé Fils: Meunier through Tragedy and Triumph
An hour east of Paris in Champagne’s Vallee de la Marne, lies the pastoral village of Cuisles. The vineyards here are exceptionally steep and surrounded by the most beautiful landscape in Champagne. This village is home to Cédric Moussé,...
Read More 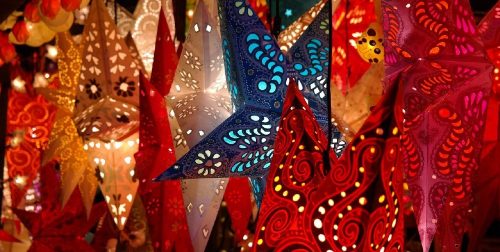 BUON NATALE 2016: Christmas Traditions from Our Italian Winemakers’ Table to Yours!
Christmas traditions are an important part of the Italian family, and no two holiday tables ever look the same. Whether it’s tortelli in Toscana, or panettone in Piemonte, each family has their own unique way of celebrating the season. This...
Read More