There is a saying in Japanese that nihonshu wa ryori o erabenai, usually translated that “sake isn’t picky about food” or “sake doesn’t get into fights with food.” While for centuries gourmands in Europe have discussed matching wines of a particular site and vintage with particular foods, sake has no such history. While food and beverage pairing is most definitely an art and not a science, it is an art that has precedent, theory and greatest hits. Red burgundy and grilled duck breast. Sauternes and foie gras. Even the tired and overly broad truism of “reds with meats, whites with fish” doesn’t really have an analogy in the traditions of sake drinking.

Until recent times, sake was not something that required a sommelier or expert to guide you through a vast cellar, for the simple reason that no one kept cellars of sake from different regions. The word sake itself simply means alcohol, and it referred to whatever alcoholic brew was made locally. That didn’t mean it wasn’t fine stuff, but regional differences in sake were determined more by the qualities and ingredients of the local cuisine than anything else. To this day people can roughly refer to different sake as being ‘ocean’ sake, light and dry and meant to pair with bounties of the sea like shellfish and sashimi, and heartier and richer ‘mountain’ sake that stands up to game meats and preserved or pickled foods. In other words, sake was traditionally made to pair with a range of dishes on the table, as opposed to locking in to any one dish.

On a physical level as well, sake pairs with food in a much more subdued manner than wine pairings. Wine in general has much higher levels of acid than sake, and those acids mark a dividing line between wine and food. They cut through fats and rich flavors, or provide a subtle high note that can sing through the flavor. On the flip side, these acids can clash with flavors like spice or delicate briny seafood.

Traditionally the role of sake and drink in Japanese cuisine was not necessarily to pair with food but to focus, support and amplify it. Sake was the backdrop that threw the flavor of the food into relief and allowed you to perceive it more clearly. For a pristine sushi omakase with its successive series of immaculate single bites, the ideal was a dry and clean drink to push the reset button on your palate between each perfect morsel. 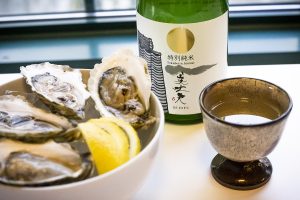 In a country as obsessed with food as Japan, where once you are old enough to talk you are dissecting the intricacies of cuisine, drinks were necessarily in the supporting role, which doesn’t deter from its art or complexity. Sake is the key member of the basketball team with the most assists, sake is the character actor who makes everyone else in the scene better, sake is the bass player that glues the whole band together, intangibly everywhere at once as everyone else takes starring roles.

But in some contexts, the bass comes to the fore, and today we’ll be going over some food matches where its supportive nature goes from a nice accompaniment to food to a true knockout. Some of the best pairings for sake are areas you’d expect, from the ocean. 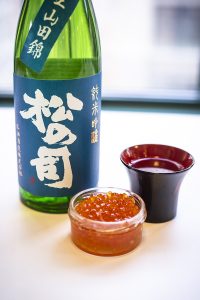 The mild and soft nature of fine sake contrasts beautifully with some of the saltiest and briniest treasures of the sea. While the conventional wisdom in the wine world for rawoysters are sharp and mineral driven wines like Chablis, the soft nature of sake lets the natural brininess of east coast oysters come through while tempering its fishier aspects. Check out these Wellfleets with Bijofu Tokubetsu Junmai! Bijofu is made just steps from the Pacific Ocean in the remote area of Kochi, famed for its seafood, and there are few things we enjoy more with a raw oyster than this zippy and fresh sake with its notes of fresh mint.

While fish roe and caviar are often paired with Champagne or a well-chilled vodka, we’re here to tell you that you haven’t truly tasted those little briny bubbles until you’ve had them with a sake. Much like an oyster, the fishier aspects are washed away while the pure saline flavor stands out against the mild creamy notes of Matsu no Tsukasa Junmai Ginjo.

You may have noticed that our first two pairing sake are both the workmanlike junmai grade, which distinguishes itself as having a defined structure and focus and weight that matches well with food. The more rarefied and high-flying Ginjo grades – with their floral aromas and fruity qualities – can be a trickier match. However, one of the most surprising pairings for sake are its incredible affinity for cheese, and the fruitier sake styles provide an incredible complement to blue cheese. The fruit driven and savory Jokigen Junmai Ginjo provides an 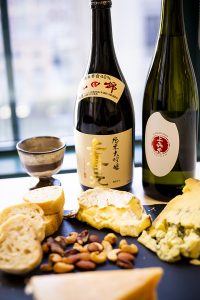 While it may seem totally counterintuitive to pair Asia’s most famous beverage with a traditionally European food, by a happy accident the main acidic component to sake is lactic acid, giving many sake a creamy quality which marries beautifully with cheese or cream sauces. The other contrasting components of sake-like its earthy or fruity notes can then stand in beautiful contrast. If you don’t believe us ask anyone in the cheese world: sake and cheese has been an open secret there for years.

Which brings us to our last and most non-intuitive pairing: the bold and deeply rich Mutemuka Muroka Nama Genshu Junmai with that most American of dishes: Buffalo Chicken. We tried this for the first time a couple weeks ago at a dinner pairing sake with non-Japanese food and it knocked everyone’s socks off. Seasoned wine pros thought it was the pairing of the night. Being undiluted the sake has a bracing 18% ABV which cuts through the rich and sweet flavors of the chicken, 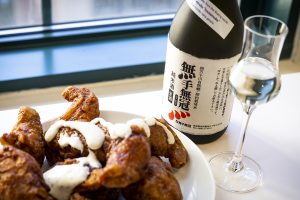 but also has beautifully earthy cocoa notes that blend with the fried skin. Finally, it has a depth and creaminess that melds incredibly well with blue cheese dressing.

While there is never a substitute for Barolo with lamb, we’re starting to discover situations where sake can bring an entire new element to even very familiar dishes. As we said at the top, food and beverage pairing is more of an art than a science, and bringing sake into the mix opens up an entirely new color palate to play with. So, pass the buffalo chicken and the bottle aged sake: this is going to get interesting.