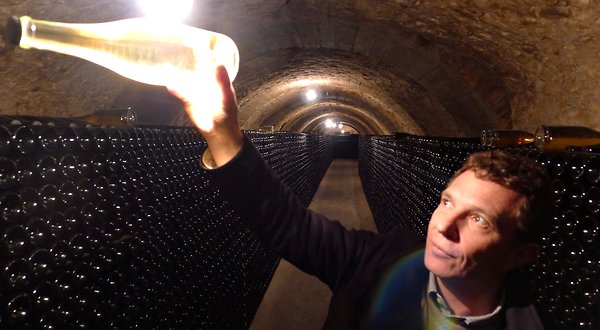 Nicolas Chiquet farms 23 heactares in the Valle de la Marne in the villages of Ay, Dizy, Hautvillers and Mareuil-sur-Ay. All of the fruit (including that which is used in the non-vintage cuvee) comes from premier and grand cru grapes. Nicolas does not employ any oak aging at Gaston Chiquet; he believes that concentration, fruit maturity and malolactic fermentation impart enough body and texture to make aging in barrel unnecessary.

“In 1919, two brothers, Fernand and Gaston Chiquet—winemakers born and bred—came together to create their house Chiquet Brothers. They were ‘pioneers’ in Champagne, the very first winemakers to take the initiative, bold at the time, to keep their grapes, turn them into Champagne and sell their own wine. Nicolas Chiquet planted his first vines in 1746, and since then eight generations have tilled Dizy’s soil. Gaston Chiquet registered the company in 1935 and expanded the property with land in Aÿ, Cumières and Hautvillers. Gaston Chiquet is best known for making the only blanc de blancs from the Pinot village of Aÿ. Aÿ was the big name in the area long before wines became sparkling, and many were the kings and popes who counted Vin d’Aÿ as their favorite wine. The vineyards slope down steeply to the village by the Marne River, and the best locations are just over the town, sheltered from the wind and with maximum exposure to the sun.”
-Richard Juhlin, 4000 Champagnes

“I think if you asked me to sum up Chiquet’s wines in one pithy phrase, I’d have to say either “delicious and articulate” or “articulate and delicious” depending on which you preferred. . . . I myself tend to peg Nicolas Chiquet’s wines as “innately lovable” and so it always surprises me to rediscover just how focused and precise they are, as if the prose of E. B. White were rendered in the form of Champagne. They taste effortless, tactful, yet attractive.”
-Terry Theise

We are excited to share with you the latest releases from Spécial Club growers Pierre Gimonnet, Mouzon-Leroux, Gaston Chiquet, Henri...
Read More

Thank you to all that could join our Fall Champagne Preview in NYC! We were thrilled to host fourteen of...
Read More

Booze & Bubbles: Meet the Men & Women Behind the Marques!

Skurnik’s Spirits Selections continues to grow in breadth and reputation. This past October, Spirits took the lead in a tasting...
Read More

Thank you to all that could join our Booze & Bubbles Tasting, our fall tasting where spirits are now a...
Read More

In 1971 a group of twelve growers started an organization called Club de Viticultures Champenois, to promote the concept of...
Read More

Thank you to all who joined us for an ebullient event celebrating effervescent wines. This is always our most festive...
Read More
View at Google Maps