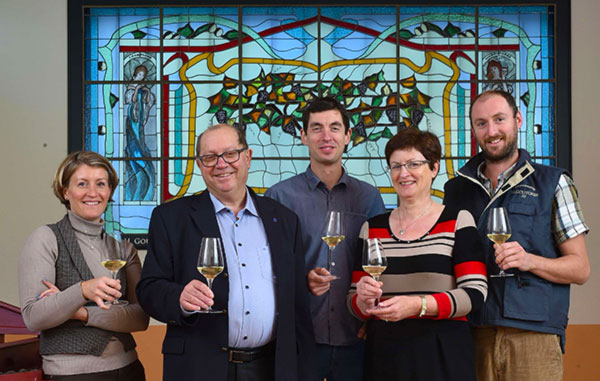 “Aÿ was really well known in the region long before effervescent wines were made here. Innumerable kings and popes expressed a preference for the vin d’Aÿ. . . . The vineyards are located on the steep slopes of the Bois de Charlefontaine, a village on the banks of the Marne. The best plots are sheltered from the wind, just above the town, and benefit from maximum exposure to the sun. . . . The Aÿ Pinot Noir is an inimitable combination of purity in aroma, richness in taste, and velvety structure.
-Richard Juhlin, 4000 Champagnes

“The Goutorbe family has been producing estate-bottled champagne in Aÿ since the late 1940s, but even before that they were already established as pépiniéristes, nurserymen for propagating vine cuttings. Emile Goutorbe established the nursery business just after the First World War, while he was the vineyard manager for Perrier-Jouët, and the success of this business eventually allowed him to purchase some parcels of vines in the area. His son Henri created the Goutorbe label, bottling and selling some champagne while continuing the nursery business.

In 1970, Henri’s son René took over the estate, expanding the vineyard holdings and enlarging and modernizing the winery. Today they own 25 hectares, a considerable quantity for a champagne grower, planted with 70 percent pinot noir, 27 percent chardonnay and three percent meunier. The jewel of Goutorbe’s vineyard holdings is their six hectares of Aÿ grand cru, although they also own vines in several other villages, including Mareuil-sur-Aÿ, Bisseuil, Avenay Val d’Or and Hautvillers.”
-Peter Liem, Champagneguide.net

We are excited to share with you the latest releases from Spécial Club growers Pierre Gimonnet, Mouzon-Leroux, Gaston Chiquet, Henri...
Read More

Booze & Bubbles: Meet the Men & Women Behind the Marques!

Skurnik’s Spirits Selections continues to grow in breadth and reputation. This past October, Spirits took the lead in a tasting...
Read More

Thank you to all that could join our Booze & Bubbles Tasting, our fall tasting where spirits are now a...
Read More

In 1971 a group of twelve growers started an organization called Club de Viticultures Champenois, to promote the concept of...
Read More

Thank you to all who joined us for an ebullient event celebrating effervescent wines. This is always our most festive...
Read More
View at Google Maps