The wines of Domaine Ciringa are Sauvignon Blancs unlike any we have tasted; they are deep, resonant wines that somehow defy gravity. Armin is one of the most dynamic and driven winemakers we’ve spent time with and we are delighted to represent this Domaine across the U.S.

We met Armin Tement at a Wine Spectator tasting seven or eight years ago while stationed behind a table full of grower Champagne directly across from Weingut Tement, Armin’s eponymous winery in Styria, Austria. The start of the tasting was a bit slower and we had the opportunity to taste through a range of Tement’s wines. It was then that we discovered the Ried Zieregg Sauvignon Blanc, which was delicious and unlike anything we’d ever had before.

Armin is the third-generation winemaker for both Weingut Tement,  tied to more than sixty years of tradition, and the younger Domaine Ciringa, which was started in 2005.  After meeting, we started to seek out Armin’s wines and drinking them wherever we could, which was not difficult as his wines are found on some of the very best wine lists in New York and abroad. We became reacquainted last Fall and were officially introduced to the sibling Slovenian property, Domaine Ciringa.

The Austrian Weingut Tement is a large and complex winery; in a single vintage, the estate may produce over 50 different wines from five different grape varieties, planted in ten different single vineyards. With Domaine Ciringa, the focus is on one single vineyard Ried Ciringa, the Slovenian name for Ziereggand one grape variety, Sauvignon Blanc. The border between Slovenia and Austria runs directly through the vineyard. Ciringa is an incredibly steep and beautiful Grand Cru vineyard that the Tement family has farmed for three generations on the Austrian side. The name of the series of wines – Fosilni Breg (Fossil Mountain) references this place and geology… even the front label shows a fossil of a large, ancient sea star.

When Armin began working with his father in 2005, they agreed to start cultivating the vineyards organically, replanting sections of vineyards across the border—on the Slovenian side. The vineyard is a continuous, south and southwest-facing steep mountain hillside of pure 60-million-year-old limestone reef, formerly covered by the ancient Paratethys sea. 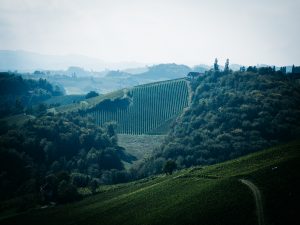 If you compare the soils in Ciringa to Champagne or to Chablis, it is the same type of soil but much younger; in Chablis, one can find 200 to 400-million-year-old Kimmeridgian limestone, but here lies a  former seabed with soil that is 20 to 60 million years old. Above the limestone is a mixture of marl and clay, which gives the wines a very distinctive character.

“Sauvignon Blanc grown on these soils is not really tasting like Sauvignon Blanc. You have a big impact from the soils on the structure of the wines.”

The vineyard Ciringa starts at 330 meters above sea level and rises to 490 meters. For each 100-meter rise, you lose one-degree centigrade in average temperature. This gives the vineyard very heterogeneous ripening stages on one single hillside. Because of these climatic and geologic differences, different rootstocks and massale selections were made from old vines in the Tement vineyards. “Each parcel is harvested and vinified separately to get more diversity in each wine,” says Armin.

From the very beginning, the vineyards in Ciringa have been farmed organically and biodynamically but were certified organic in 2019 and Demeter and Respekt certified in the 2023 vintage. Most of the work is done by hand out of necessity – it is impossible to drive a tractor into many of the steeper sections of Ciringa. Yields here are quite low for Sauvignon Blanc and vine density is about 5,000 vines per hectare, which translates to one kilo per vine.

“For us, this is a good balance. You have freshness, you have ripeness, but you have small berries and good structure in the juice.” Says Armin. The harvest is, of course, done entirely by hand. 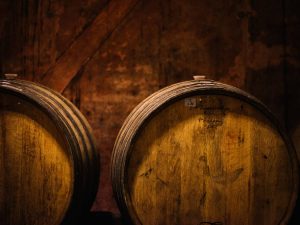 Each parcel is harvested very early in the morning and then vinified separately. The wines see a relatively long skin contact of 12 to 36 hours as Armin feels it is important to “extract the secondary flavors, to go deeper than the primary flavors.” The time of skin contact is determined by several factors, including the thickness of the skin, temperature at harvest, and level of acidity.

Armin’s philosophy on acidity as it relates to skin contact is rather antithetical to some conventions, especially with Riesling, when skin contact is sometimes used to naturally reduce acidity:

Armin works in the entire vinification process without sulfur, which would not be possible without the structure in the fruit and skin contact. After pressing, the must goes directly into cask and is fermented naturally. “We do not make the pied de cuve” says Armin “Each cask should start with its own fermentation. This takes, depending on the vintage seven to ten days, sometimes fourteen days. This is a very interesting time because this is the first oxidation, the first development of diversity, the first splitting of flavors in each cask.”

There is no temperature control in the cellar, though the temperature is low, so fermentations proceed slowly, normally for about three months. Sometimes fermentations stop with the cooler temperatures and the wines can have some residual sugar, but fermentations restart again in spring or summer when malolactic finishes.

Just before the next harvest, we make our first racking from the big casks. Every parcel has its own cask, traditionally from 700 to 4,000-liter casks. The oak is mainly from Styria, Lower Austria, and Slovenia, produced by cooper Pauscha in Corinthia. There is a very strong connection to Pascha. He is always coming to taste with me because when he is selecting the oak, he needs to know how much structure needs to be in the oak. The oak is seasoned for eight to ten years before being bent over a very light toast.

Pruh is the flagship wine, a top, parcel selection of which only a single cask is bottled in years in which the wine has the right character. Pruh means “quarry”, and the vines are growing in almost a pure limestone parcel. The first vintage of this wine was in 2015, and 2018 will follow. 2015 was bottled after 66 months on the lees. Pruh is the first of the single vineyards, but in the future, there will be small amounts of other individual parcels bottled and released.

In some vintages, a Fosilni Breg Deserto Vino is produced with 20% Botrytis, fermented in cask, but with higher alcohol and 60 grams of residual sugar and 10 grams of acidity, like a BA meets Sauternes. All of the wines are bottled without fining or any filtration. “Our way is to go with the time. To give the wines the time they need. The wines reflect the soil and the process – they are structured wines, but not heavy with alcohol or rich in fruit.”

We are thrilled to represent Domaine Ciringa across the U.S. starting this January. 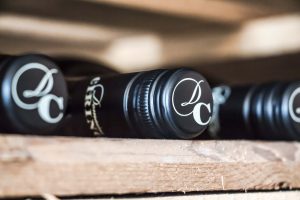