Home > Skurnik Unfiltered > Italy > Terenzuola: Where the Alps and the Mediterranean Meet 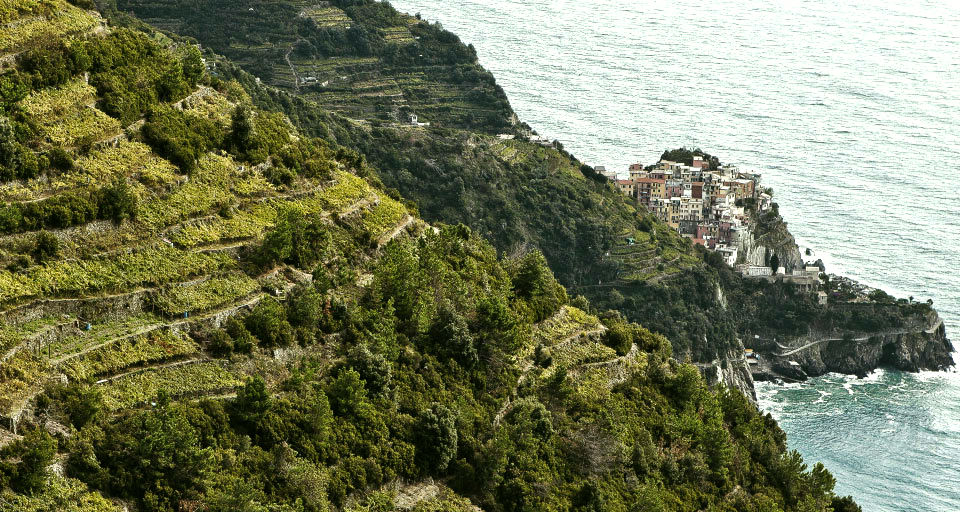 At once both Tuscan and Ligurian, the wines of Terenzuola reflect the dual ity of their terroir. The vineyards face the Mediterranean, which provides warm sun and cool breezes, but also find themselves in the Apuan Alps (a subzone of the Apennine mountain chain), which provide freshness and complexity. The resulting wines dance on the palate with an incredible balance of fruit, minerality, acidity and complexity. And the history of the family that owns the estate is no less captivating than the wines themselves!

The Giuliani family arrived in New York City in the late 1800s as emigrants from a difficult corner of Emilia Romagna. In the United States, they prospered until the great depression of 1929, when they decided to return to Italy. With their savings, they purchased a small three hectare farm in the northern part of Tuscany and in the southern part of Liguria, between the Apennine Mountains and the sea of Liguria. The area is known as the Lunigiana – after the city of Luni, an ancient Roman colony of the second century b.c. located near the mouth of the Magra river. Throughout history this has always been a contested area. In their times the Romans, the bishops of Medieval Italy, the feudal lords of Florence, and now the byzantine bureaucrats of today’s Italy have fought over the political borders of these lands.

Today, Ivan Giuliani is at the helm of the estate. As a young man, starting in 1993, he helped his uncle to bottle their harvest and sold the wine to local restaurants. But in 1995, he was called away from home to complete his mandatory military service. Entirely by coincidence, he was stationed in Friuli and Slovenia—“a borderland” not unlike his native Lunigiana. There he learned to make better wine alongside local vignerons and gained an appreciation for the idea of living off the land, as well as respecting it. Sustainability and environmentally-safe practices are a big part of his concern as a winemaker. When he finished his military service, he returned home and decided to dedicate his life to making wine at his family estate.

In 2007, together with his friend and fellow vigneron Marco Nicolini, he renovated the cellars at Terenzuola, and brought the total hectares under his management to 18. Also in this year, he formed a partnership with Evasio Pasini, whose family for centuries had lived and cultivated vineyards in the Riomaggiore township of the Cinque Terre. The landscape here was crafted by man over thousands of years of work by hand, without mechanization. The hillsides were terraced with sandstone rocks, skillfully placed one by one and kept together only with dirt and crushed stone, without the use of any mortar. In 2012, Terenzuola bought out Pasini from the Cinque Terre project and brought the label under the umbrella of Terenzuola.

“The Cinque Terre is one of the most fascinating areas of all Liguria… which was essentially abandoned in 1960 due to economic factors. The passion for wine and for viticulture pushed us into this new project in Cinque Terre: although our contribution is minimal, we are happy to help defend this unique man-made landscape built by our ancestors with an incredible amount of labor.”
– Ivan Giuliani

While in NYC for our 2016 Grand Portfolio Tasting, Ivan had the opportunity to sit down with Joe Campanale, host of Heritage Radio’s In the Drink.  In this episode, they discuss the history of viticulture in Liguria, the challenges of farming on the region’s incredibly steep slopes, and what the future holds for the small growers of this unique zone.

“Every year, three million Americans visit the Cinque Terre… [As winemakers], we are all involved in the economy of the region.  For each person that comes to visit us, there is the opportunity to introduce them to our wine.  [It is important to] remember that, at one time, the Cinque Terre had 1,500 hectares of vines. Now, with 42 producers, we grow just 48 hectares.”
– Ivan Giuliani on In the Drink

Listen to the full podcast here. 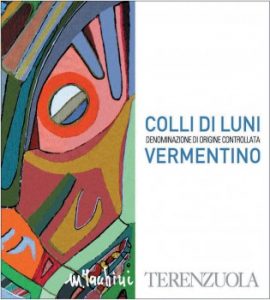 Vermentino Colli di Luni ‘Vigne Basse’ 2014
The entry level Vermentino from the Terenzuola estate is a blend of fruit from three of Ivan’s vineyards. The amazing thing about Fosdinovo, the municipality in which Terenzuola finds itself is that it goes from an altitude of 50 meters above sea level all the way to 450 meters above sea level in about three miles, and it is here that both the classic soil types of Tuscany and Liguria can be found entwined with one another.  In the lower areas the Tuscan type of soils (mostly loam and clay) are predominant while into the hills, the soils tend to the Ligurian type which is mainly sandy. Grapes are picked by hand during the last week of September and the first two weeks of October according to the ripeness in each sub-plot. Ivan’s intention in vinification is to lose nothing of what his vineyards have given him. Grapes are transported to the winery as carefully as possible. The must is cryo-macerated for one night before fermentation begins with temperature control. After alcoholic fermentation (with selected yeast), the wine is racked once but rests on its fine lees until bottling in mid-February. The label is part of a painting by Maria Tacchini, cousin to Ivan. 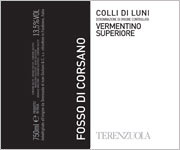 Vermentino Colli di Luni ‘Corsano’ 2014
Fosso di Corsano Vermentino comes mostly from the eponymous vineyard which surrounds the Terenzuola estate in Fosdinovo at 370-400 meters above sea level. The soil here is sand with loam and schist. The other vineyard, at 200 meters above sea level in Belvedere is entirely clay. Grapes are picked by hand during the last week of September and the first two weeks of October according to the ripeness in each sub-plot. Grapes are transported to the winery as carefully as possible, and only gravity is used to move the must—it is not pumped from tank to tank. The must is cryomacerated for up to two days before fermentation begins with temperature control. After alcoholic fermentation (with indigenous yeast), the wine is racked once but rests on its lees for 8 months until bottling. 2000 cases produced annually. 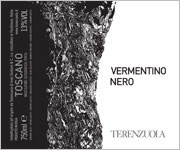 Vermentino Nero 2014
Research at the University of Pisa has determined that Vermentino Nero is actually unrelated to Vermentino – and further that it is not a relation to other classic Tuscan Varietals – Sangiovese, Canaiolo or Colorino, for example. Ivan’s vineyards are located within the municipalities of Pontremoli, Licciana Nardi, Fosdinovo, Carrara and Massa. As always, he uses high-density planting with low yields and organic farming to get the best possible fruit from his vineyard. The grapes are harvested by hand during the month of October, and are picked according to the ripening in each different plot. Maceration and fermentation occur in open-top barriques with frequent punching down of the cap. After alcoholic fermentation, the wine is racked by gravity and is then matured on the lees. The wine is then released in April after a month of aging in the bottle.  About 1800 cases are produced annually. 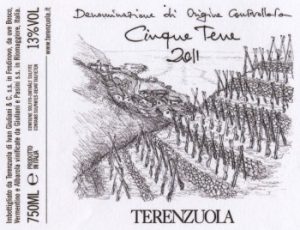 Cinque Terre Bianco 2015
This 300 case production wine is both a rare gem and a steal when you consider the incredible work that goes into farming these grapes. From just 1.2 hectares of 16 different plots of terraced vineyards (some as small as 300 square meters!) in the township of Riomaggiore. The soil is sandy, and harvest (usually the last week of September) can only be carried out by hand. The blend is more or less 40% Bosco, 40% Vermentino with 20% Albarola. The Bosco undergoes one day of maceration and then fermentation in a 7 hectoliter oak cask; while Vermentino and Albarola are vinified in stainless steel, also with a single day of skin contact. The wine rests on its lees in stainless steel for 6 months, and is bottled in April.