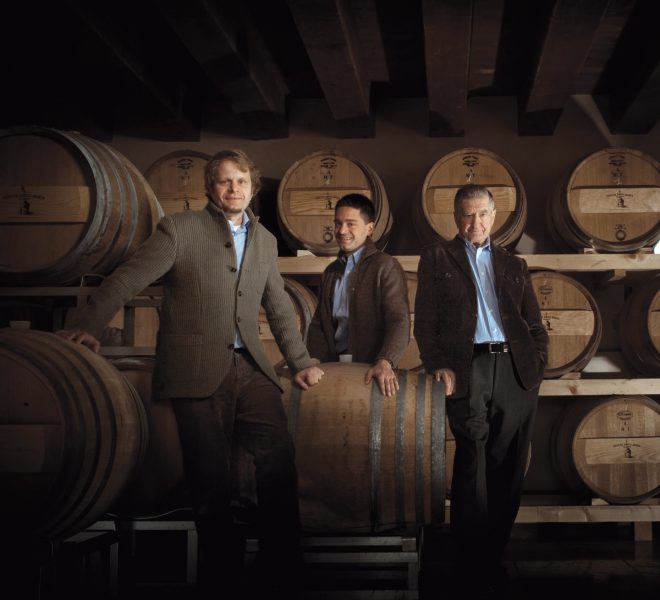 Imagine there was a family estate in our portfolio whose impact was so great that it shaped the culture, history, and wine of Italy. It sounds fantastic, but it’s the real story of Gaetano Bertani’s Tenuta Santa Maria. It was Gaetano’s great grandfather and great uncle, Gaetano e Giovanni Bertani, who set out to establish a new benchmark for excellence in winemaking in the Veneto in the latter half of the 1800s. But they were not starting from zero; historical documents attest to the Bertani family’s history in the area as far back as the 1400s and more specifically trace the family’s activity in the wine business to the 1630s.

During his years of political exile in France for his role in the movement to unify Italy, Gaetano Bertani met and studied with Jules Guyot, the famed agronomist, eventually bringing home his revolutionary viticultural ideas to Italian agriculture. Planting of the vines in low-standing, high-density rows, single branch pruning in spring, and subsequent green pruning during the growing season were ideas that, along with the brothers’ business savvy, brought the family rapid and noteworthy commercial success. The brothers Bertani built an enterprise unique to the Veneto of their time and became the first in the region to bottle and sell Veronese wines such as Valpolicella Ripasso, Recioto, and Soave on a large scale.

Politically speaking, Giovanni Bertani also made contributions to the nascent Italian Republic on both local and national level. Locally, he served as the mayor of Quinto, and then he served two terms as a member of the Italian Parliament. He also consulted with the agricultural minister to help create the wine appellations of the Veneto. 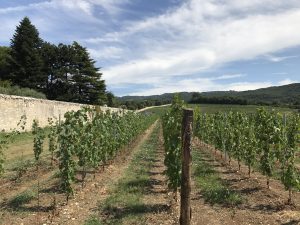 The heart and soul of the Bertani enterprise as we know it today, Villa Mosconi-Bertani, was purchased by the family in 1947. It’s a 22-hectare walled-in clos of high-density planted indigenous grapes that was, since its origins in the 1500s, a self-sustaining farming community, replete with a chapel and its own saint day celebration. Much Italian history both cultural and agricultural was written here! The vineyards were some of the first to be converted to the Guyot method in the 1800s and are widely considered to be some of the finest in the Veneto region.  The term “Amarone” was also coined in 1936 within Villa Mosconi’s very walls for a wine very similar to one the Bertani Brothers had been producing since the 1920s as “recioto secco.”

Also in the mid-1800s, the Bertani family acquired the Tenuta di Colognola, in Colognola ai Colli in the Soave appellation for the production of Soave DOC. Its Lepia vineyard is 20 hectares of 45-year-old vines planted around a 16th-century farmhouse. The inspiration for the symbol of the Bertani estate was found here. It’s an old Roman century marker, which is quite fitting since there are references found in Roman archives to both the Colognola farm and grape growing in the area going back to 30 BCE. The soil is layers of clay, stones, and sand from the limestone of the Alps that enticed the Romans to plant here over 2000 years ago.

In 2011, Gaetano decided to split from the commercial company that Bertani had become. He negotiated a buy-out in which he and his sons maintained three of the family’s most prized vineyard sites while selling the name Bertani to a pharmaceutical company. The transition, which started in 2013, became complete in 2018.  Finally, Gaetano Bertani, great-grandson of founding brother Gaetano, and his sons, Giovanni and Guglielmo, are back to their core business: making great wines from the unique terroirs of the Veneto. This is one of the most exciting and satisfying acquisitions for the Skurnik Wines Italian Portfolio to date, and these wines deserve the attention of all lovers of Italy and her wines. 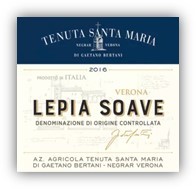 Tenuta Santa Maria’s Soave comes entirely from the Bertani family’s Lepia vineyard at the Tenuta Colognola ai Colli. This estate, once a Roman centurion’s farm, is home to a 15th century villa, as well as 6 hectares of Gaetano Bertani’s 40-year-old Garganega vines. The grapes see three different harvests: the first to preserve the acidity, the second for optimal ripeness, and the third to add richness and weight to the wine. It’s then vinified in stainless steel and aged on the fine lees for three months. The resulting wine shows the richness and complexity of Garganega when encouraged with low yields and high-density plantings. 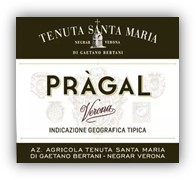 The Pragal comes from the Bertani family estate in the Val d’Illasi, and is a fruity, spicy blend of Corvina with Merlot and Syrah. While the Merlot and Syrah are harvested in September, and vinified immediately, the Corvina is picked in October, and then left to dry for a month before fermentation on the skins for approximately three weeks. This is followed by fining for six months in large oak barrels, as well as a small amount in barriques. After 6 months of aging in oak, the Corvina is assembled with the Merlot and Syrah, and then the wine is aged briefly in bottle before release.

James Suckling 92 “This shows aromas of dark berries, earth and mushrooms. Medium body, round and polished tannins and a lively finish. Delicious now. Why wait?” 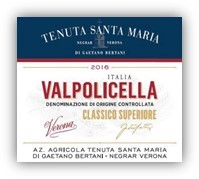 Tenuta Santa Maria’s Valpolicella Classico Superiore hails from the Bertani family’s estate at Villa Mosconi, in Arbizzano di Negrar.  75% Corvina, 15% Corvinone and 10% Rondinella grown in calcareous clay soils in the heart of the Valpolicella are crushed, cold-pressed and fermented in stainless steel for 25-30 days before being transferred to casks ranging in size from 8 to 190 hectoliters. The wine ages in oak for 16 months before bottling. 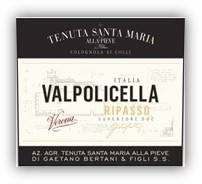 The Ripasso method has been the source of much controversy, but Italian law has finally codified the methods and safeguarded this important tradition of Veneto winemaking that the Bertani family has used since the 1850s. 75% Corvina, 10% Rondinella and 15% Corvinone grapes, harvested from the Villa Mosconi estate in Arbizzano di Negrar, are crushed, cold-pressed and left to ferment for 25-30 days at a controlled temperature. When fermentation is complete, the wine is held in steel tanks awaiting to be poured over the unpressed skins of the estate’s Amarone, which occurs in late January or mid-February. The Valpolicella then undergoes a second maceration and fermentation with the marc of the Amarone to acquire complexity, structure and elegance. After the pressing, the wine is decanted into cask where malolactic fermentation takes place. After 24 months, the wine is then bottled for a minimum of six months’ further refinement. 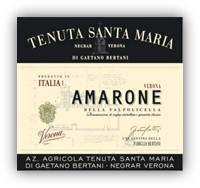 75% Corvina, 10% Rondinella and 15% Corvinone.  The vines are trellised via the pergoletta system. After harvest, the grapes are left to dry for  4/5 months. In the middle of January after reaching their desired sugar content and losing 25%/30% of their weight, the almost raisin-like grapes are pressed and fermented for 25/30 days at controlled temperatures with daily pumping over.   After 48 months of aging in tonneaux the wine is bottled and remains for 6 months before release. 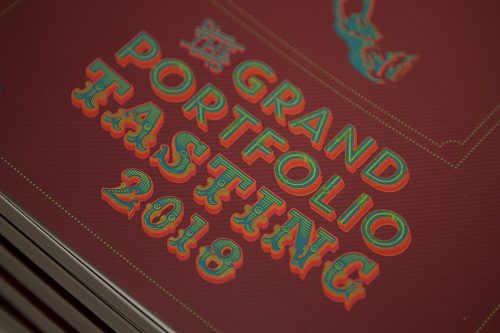 2018 Grand Portfolio Tasting: The Greatest Show On Earth
Our portfolios are bursting at the seams with the finest beverages ever made, and to make things more comfortable this year, we took over the entire Metropolitan Pavilion. More space meant more room to get around and luxuriate with your...
Read More

The Kids Are Alright: Fresh, Brash, and Youthful Sake Muroka Nama Genshu
If you ever get the privilege to visit a kura, as you are led through the rows of fermenting tanks, stepping over hoses and watching your breath form in the chilled air necessary to keep the huge cauldrons of rice...
Read More