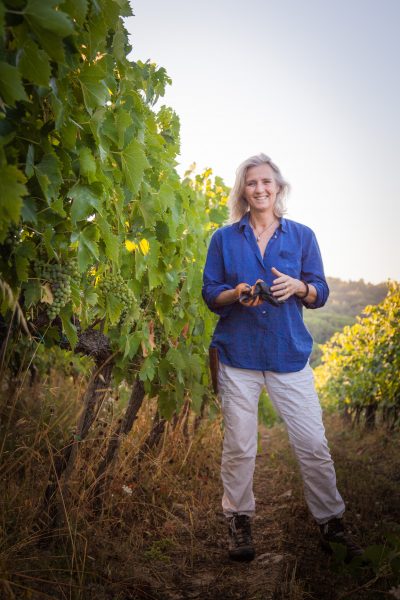 The call of the countryside was just too strong for Monica Raspi to resist. In 2007 when her mother was thinking about retiring and selling her great grandfather’s 150 year old estate in Chianti Classico, Monica promptly sold her veterinary clinic and set out to revitalize the family farm. Located in the densely forested commune of Castellina in Chianti, it’s not as high in elevation as her famous neighbors in rugged Radda, nor is it as warm a microclimate as you find in Greve or Panzano—in short, Castellina is the Goldilocks terroir for making complex, approachable Chianti Classico that shows structure and identity of place, but doesn’t stray into austerity.

Monica’s first harvest was 2007, and she immediately found that the work absorbed her entirely. She thrives on being in touch with nature and family on a daily basis. She started with a single hectare, which has now expanded to five. In 2009, she began her conversion to organic viticulture, and was certified in 2012. Lisini’s winemaker Filippo Paoletti, who studied under the great Sangiovesistas Franco Bernabei and Giulio Gambelli, is Pomona’s consulting winemaker since 2002. A better recipe for success has rarely been seen: the combination of Monica’s passion for classically styled wines in a high quality, ancient terroir, and the shoulders of these giants to stand on make Pomona a must-taste winery.

We are pleased to welcome Pomona to Skurnik Wines in New York, New Jersey, Connecticut, Pennsylvania, Ohio, Kentucky and Indiana.