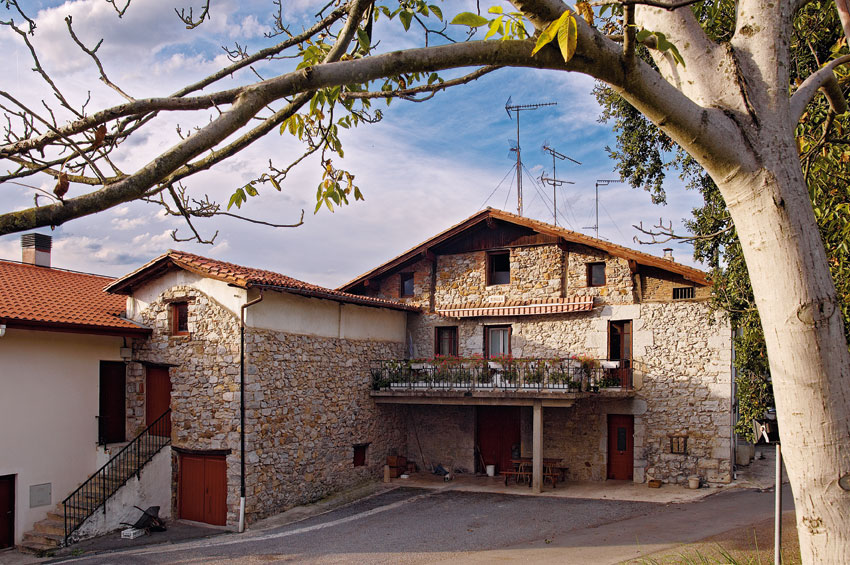 Cider has been produced at the Mendiola farmhouse in Astigarraga by members of the Astarbe family for close to five centuries. The oldest surviving document that references cider production at this address dates back to May 20th, 1563. To put that in context, Galileo Galilei, the “father of modern science”, was born in 1564.

From the at least the 11th century through the beginning of the 17th, the whaling industry in the Atlantic Ocean and Bay of Biscay was dominated by the Basques. Some historians have posited that Basque whalers (along with perhaps some Bretons and Normans) were the first Europeans to glimpse the New World, possibly as early as a hundred years before Columbus. Whether that conjecture is accurate or not, they were certainly launching regular expeditions to Newfoundland (Terranova) by the 1540s. What, you may ask, does this have to do with cider? The whaling ships were manned by crews of up to 150 men and boys, and many of the journeys lasted as long as six months. Lacking any kind of water filtration technology, locally-produced alcoholic cider was used as a substitute for drinking water when the ships were at sea. Each crew member consumed between six and eight liters of cider per day, so a given boat would have left port with between 100,000 and 200,000 liters of cider in the hold, depending on the size of the crew and the length of the voyage. Thus, the cider industry developed in concert with the whaling industry, each sustaining the other.

The history of the Astarbe family is so intertwined with that of Basque cider production that the two main apple varieties they use to elaborate their ciders are the Astarbe variety (after the family surname) and the Mendiola variety (after the name of the farmhouse). Three ciders are produced here: a traditional still cider and two Méthode Champenoise sparklers. Though the ciders are perfectly suitable as refreshments enjoyed on their own, their complexity is only revealed at the dining table. Mugaritz, currently number seven on the list of the world’s best restaurants, is located less than five kilometers away, and Astarbe ciders have been a mainstay of the restaurant’s beverage program since its opening in 1998. The cidery also has their own on-site restaurant, which is particularly busy during the season of the txotx, which begins on January 19th and runs until April or May.

In a recently-published article in PUNCH, Megan Krigbaum delves briefly into the challenges faced by cider producers in Spain. Iker Zubia, Astarbe’s export director, is quoted as saying, “People just ask for cider in Basque country – not a style, not a producer. It’s the same with wine: white or red.” The price competition is incredibly fierce, and the indifference to brand or production methods gives the ten or so mammoth, industrial producers a considerable advantage over small houses like Astarbe who don’t have nearly the same economies of scale.

The Astarbe family distinguish themselves in a couple of ways. First, they graft their heirloom varieties onto wild rootstocks. The majority of the producers in the region use rootstocks engineered to produce trees that bear fruit after five to six years and die after about thirty. Astarbe’s trees do not produce a useful crop for fifteen to twenty years, and live for between eighty and a hundred years. The apples these trees produce are smaller and more concentrated, with more complex flavors. The other unique practice at Astarbe is the production of the two Méthode Champenoise sparkling ciders, Byhur and Byhur 24, with 12 and 24 months of lees aging, respectively. The name Byhur is a multilingual pun. With slightly different spelling, the word is Basque for a child who can’t sit still. Also, Hur Astarbe is the name of the current cidermaker, who represents the fifteenth generation – so the ciders are made “by Hur”.

Cider is having a moment in the market these days, as more and more consumers are seeking it out as an alternative to beer and wine. These ciders offer great freshness and complexity at a very modest price. And if the story of the Basque whalers intrigues you and you’re interested in following in their footsteps, you can find the details of an upcoming expedition here.