Home > Skurnik Unfiltered > News > In a Kingdom by the Sea: The Wines of Bodegas Barbadillo

Founded in 1821 in Sanlúcar de Barrameda, Bodegas Barbadillo is now in the hands of the seventh-generation descendants of the founder, making it one of the oldest privately-held companies in any sector in Spain. The firm boasts 500 hectares of vineyards split between two farms, Santa Lucía and Gibalbín, both located in the Jerez Superior viticultural zone. They mature some 31,800 casks of wine in seventeen different bodegas, most of which are located in the Barrio Alto, the most privileged district of Sanlúcar for aging wine. Chief among them in terms of historical and aesthetic significance are Bodega del Toro, built in 1660, and La Arboledilla (pictured above), perhaps the region’s most resplendent example of the classic 19th-century style.

For a company with such august history, Barbadillo has proven surprisingly nimble in their transition into the 21st century. Tradition is sacrosanct here, to be sure, but the principals of the firm believe that the best way to honor that tradition is to leave room for innovation and adaptation. This effort begins with personnel. In one of the most famously patriarchal regions of the most famously patriarchal country in Europe, one might be surprised to know that Barbadillo’s winemaking operations are overseen by a woman. Montserrat Molina celebrated 20 years at Barbadillo in August of last year, and she is universally considered to be among the most accomplished winemakers in the entire Marco de Jerez. Montse is soft-spoken and unfailingly humble, but her self-effacing nature belies a deeply intellectual approach to the intricacies of the sherry-making process. 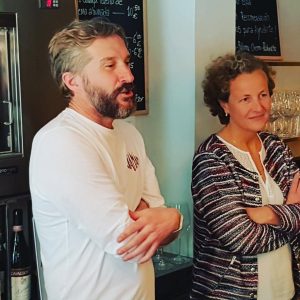 The newest exciting hire at Barbadillo is Armando Guerra (pictured with Montse). Armando is one of the most enthusiastic defenders of the wines of the Sherry region, and his bar, Taberna der Guerrita in Sanlúcar’s Barrio Bajo, is a meeting point for wine lovers from around the world. Armando’s role at Barbadillo is to direct the newly minted Innovation Division, which is dedicated to producing small quantities of extraordinary wines, vermouths, quinas and the like from Barbadillo’s immense stocks. A fine example of the output of the Innovation Division is the Arboledilla duo. I first had the pleasure of tasting these wines at the legendary Catalan gastronomy temple El Celler de Can Roca. The two wines, subtitled Poniente and Levante, are drawn from two casks of Solear, the firm’s flagship Manzanilla, housed in the aforementioned Arboledilla bodega. The Poniente bottling is drawn from a cask on the west side of the building, the side where the cooling, Atlantic influence reigns. The Levante bottling is drawn from a cask on the east side of the building, where the warming influence of the Levante wind is dominant. The two wines share the exact same DNA, but their opposing positions in the winery create subtle, fascinating differences in character. The wines are sold together in the same package and are intended to be enjoyed side by side. 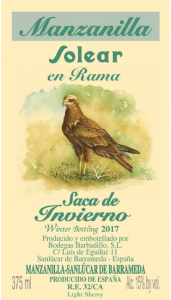 Barbadillo’s fame is inextricably tied to Manzanilla Solear. Solear is the iconic Manzanilla, the wine against which all others in the category are measured. It is matured in a massive solera comprised of about 12,500 casks, divided into ten criaderas and stored among five different bodegas. At six or seven years of average age, the wine shows not only the die-cut linearity and bright salinity that are emblematic of the category, but also an age-earned depth and aristocratic mien.

The best casks of the Solear solera are used to feed two much smaller soleras. The first is dedicated to a Manzanilla En Rama that is bottled and released four times annually – winter, spring, summer and fall. Each of these bottlings is a snapshot of the state of the flor yeast at different times of the year. The collectible bottlings feature labels with watercolor depictions of different species of fauna found in the Coto de Doñana, Europe’s largest natural park, which is located just north of Sanlúcar. The second solera fed by Solear is that of Pastora, a hauntingly beautiful Manzanilla Pasada that is exclusively matured in a bodega of the same name.

Apart from the strength of their Manzanilla range, Barbadillo also have a credible claim to being specialists in Palo Cortado. In Sherry, Manzanilla and Montilla, Peter Liem writes,

Barbadillo maintains an exceptionally large collection of old, authentic palo cortado, comprising 120 casks in all, and in essence this collection can be viewed as a solera of eight scales: Obispo Gascon is bottled from the fifth criadera, the VORS from the third, and Reliquia from the last scale, or the solera itself.

Obispo Gascon is slightly older than either the Príncipe Amontillado or the Cuco Oloroso, averaging just under 20 years of age. This maturity is evident in its mouthfilling depth and patinated flavors, as well as in its overall harmony. It shares a family resemblance with the Palo Cortado VORS, although the latter wine is deeper, more pungent and more complex. This VORS must surely be counted as one of the greatest palos cortados being made today, even if it is ultimately surpassed by the profound Reliquia, and astonishingly detailed and aristocratically refined wine with a seemingly endless finish.

For those who take an interest in wine ratings, the Reliquia Palo Cortado is one of only three Sherry wines ever to earn a 100-point rating from The Wine Advocate.

We at Skurnik Wines are tremendously honored and humbled to be entrusted with the representation of Bodegas Barbadillo in New York, New Jersey, Connecticut, Pennsylvania and California, and we look very much forward to introducing these singular, marine-inflected wines to a new generation of incipient Sherry lovers.