The Gini family has roots in the Soave Classico region dating from the sixteenth century, and owns 25 hectares of vineyards situated on the very best hillside position of the appellation. Extremely low yields, low-interference viticulture, and devoted attention to the expression of the particular crus results in wines that are not only among the greatest Soaves but also among the great white wines of all Italy. Over the last 30 years, the Gini name has become synonymous with quality, but the road has certainly been a rocky one. For decades, Soave suffered from an image problem. A surge in popularity in the 1970s drove many estates to increase production in less-than-ideal vineyard areas. The result? Prices and quality plummeted and a glut of wine ruined the market for family-run wineries. Gini was one of few growers in the region to stay the course with their production of high-quality handmade wines, and their persistence paid off.

“In 1985, when I was 19 years old, we presented our Soave to the owners of great restaurants in Milan.  As soon as they saw the labels they would say: ‘No! I don’t want to put a Soave on our wine list.’ Then, we would ask them to taste our Soave and many, surprised by the high quality of the wine, would change their minds. It would certainly have been easier for us to eliminate the name Soave from our labels, but we were, and still are, very attached to our region that we love deeply.”  – Claudio Gini

The tradition of quality at the estate dates back to Sandro & Claudio’s grandfather, Giuseppe Gini, who was considered the preeminent winemaking expert in the region of Monteforte d’Alpone. He was an innovator – the first in the Soave region to age his wines in chestnut casks – whose skill in the cellar was highly regarded by his peers.  When Giuseppe passed away prematurely, his son Olinto took the reigns of the winery at the young age of 16. To make a living, he would sell his Soave in Verona, Vicenza, and the surrounding areas with a horse-drawn cart; sometimes so tired from the day that he would fall asleep with only the horse to guide him home. Olinto’s passion for viticulture and winemaking was passed to his two sons, who run the winery today along with Sandro’s son Matteo.

In a region of mostly large growers and co-ops, what makes Gini so extraordinary?

They are a multi-generational, family-run estate:

They own many of the best vineyards in Soave:

They are a family of innovators:

They use great care in the vineyards and the cellar to ensure high quality wines:

“Gini is one of the first-rate producers in Soave.” – Antonio Galloni 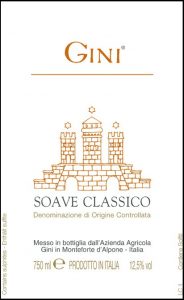 Soave Classico 2015
100% Garganega, the top quality of Gini’s fruit makes it possible to avoid blending in any other grapes such as Chardonnay or Pinot Blanc, as is common in the region, allowing for a gentle but refreshing expression of this unique varietal. Following strict selection of 100% hand-harvested fruit, the grapes are soft pressed and the must is then immediately cooled. Thereafter, fermentation takes place in temperature-controlled stainless-steel tanks. The wine remains on its lees in steel tanks for another six months before bottling, lending richness and complexity. 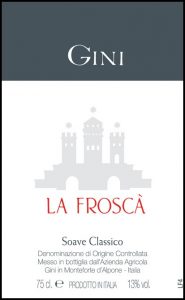 Soave Classico ‘La Froscà’ 2013
The historical Froscà cru, planted in 1955, is a 6ha plot planted in calcareous and tuffaceous (volcanic) soils, which impart a character that is completely unique to this bottling. The juice goes through a soft pressing and immediate cooling of the must.  Alcoholic fermentation and aging (on the lees) takes place in both stainless steel and small oak casks (228 L).
WA 92:  “A remarkable wine with soothing intensity & impressive persistence. Some 20% of the wine is aged in barrique for two months and this process adds to the richness of texture without taking away from the freshness of the bouquet. A silky texture wraps long around the palate.”

Soave Classico ‘Contrada Salvarenza’ 2012
Salvarenza is a tiny sub-plot of the La Frosca Cru vineyard, blessed with 80 year old vines. The grapes are hand-harvested and then temperature-control fermented in oak cask of 228 liters. Malolactic fermentation and aging are also in oak: the wine rests on its lees for nine month before bottling. Aged six months in bottle prior to release.
WA 92+: “A beautiful wine, the 2012 Soave Classico Contrada Salvarenza represents one of the best wines made in this appellation. The aromatic intensity is remarkable but the wine wins most of its points in the mouth, where it shows thick, smooth consistency. The finish is accented by tones of peach, melon & poached pear.”
WS 90: “A spiced version, well-balanced & lacy in texture, with flavors of steeped apricot, orange peel, floral and herb. Offers a long, mouthwatering finish.”

Recioto di Soave ‘Col Foscarin’ 2010
100% Garganega grown in volcanic soils. The grapes are selected and dried in a storeroom in small wooden crates. After six months the grapes are pressed. The must is then racked in barriques (228L capacity). After 18 months it is blended, bottled and cellared for an additional 6 months before release.