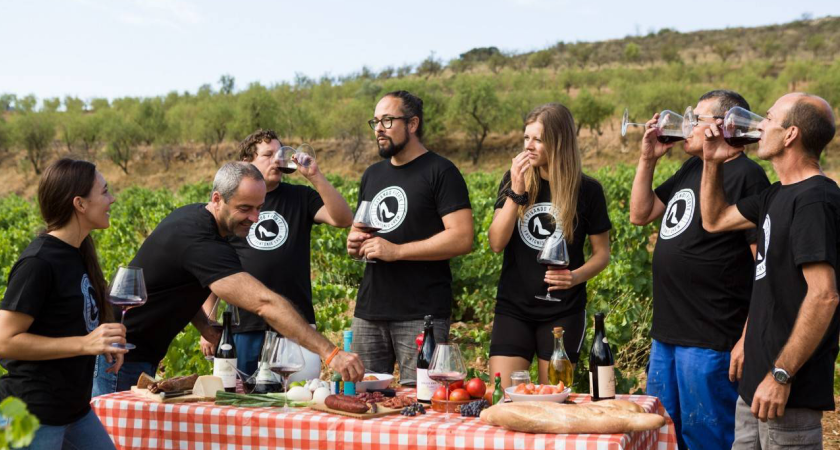 Fernando Mora (Center) and the team of Bodegas Frontonio

It’s no secret that we send our Portfolio Managers to remote locales to visit our producers and discover the world’s best wines, sakes, and spirits.

Most recently, Skurnik’s Max Working, headed deep into Zaragoza Provence of Aragon, Spain to meet one of our newest producers: Fernando Mora, MW, of Bodegas Frontonio.

This summer I had the opportunity to visit Fernando Mora of Bodegas Frontonio at his winery outside of Zaragoza. His wines have, as the Spanish say, enchanted me ever since I first tasted them. As always, going to the source proved to be a profound eye-opener. 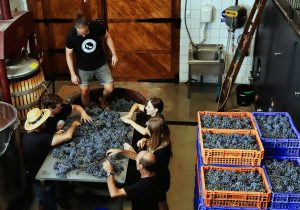 As it happens, Fernando had been discharged from the hospital day before I arrived to Aragón, and while still tottering from bedrest and a strict Aquarius (European Gatorade) diet, he gamely came out to break bread and share a glass. He was definitely not supposed to have wine, but I had schlepped some hip domestic bottles to share with my Spaniards, and the sight of a ’17 Tatomer Kick-on Riesling on the table was too much to resist. ‘I haven’t gone this long without wine since I was a child’, he says, pouring a glass over the strenuous objection of both myself and his colleagues and pronouncing the wine at least equal to any Wachau he’d had recently. (He is an MW, after all— Spain’s fourth.)

So anyway, he’s fine—but my guide this time was mostly Mario López, his right-hand man and a mean oenologist. And griller. Mario greeted me in the village of Alpartir after a long, dusty drive from San Sebastián. Alpartir lies on the eastern flanks of the Sistema Ibérico range outside of Zaragoza in Aragón. You’d be forgiven for not recognizing a word of the second half of that sentence, but yes, this is a bit off the beaten path. Once its own independent Spanish kingdom, rubbing flanks with Castile, Navarre, and the Islamic caliphates (the name ‘Zaragoza’ itself is the Arabic attempt at the Latin Caesaraugusta), Aragón nowadays is a bit sandwiched between the much wealthier, outward-facing Cataluña to the east and the better-known Rioja and Ribera to the west.  Importantly for our story, though: it’s the genetic birthplace of Garnacha. That’s right—every vine of Grenache/Garnacha/Garnatxa in the 800-kilometer swath from Châteauneuf in the east to Gredos in the west sprang ultimately from here. 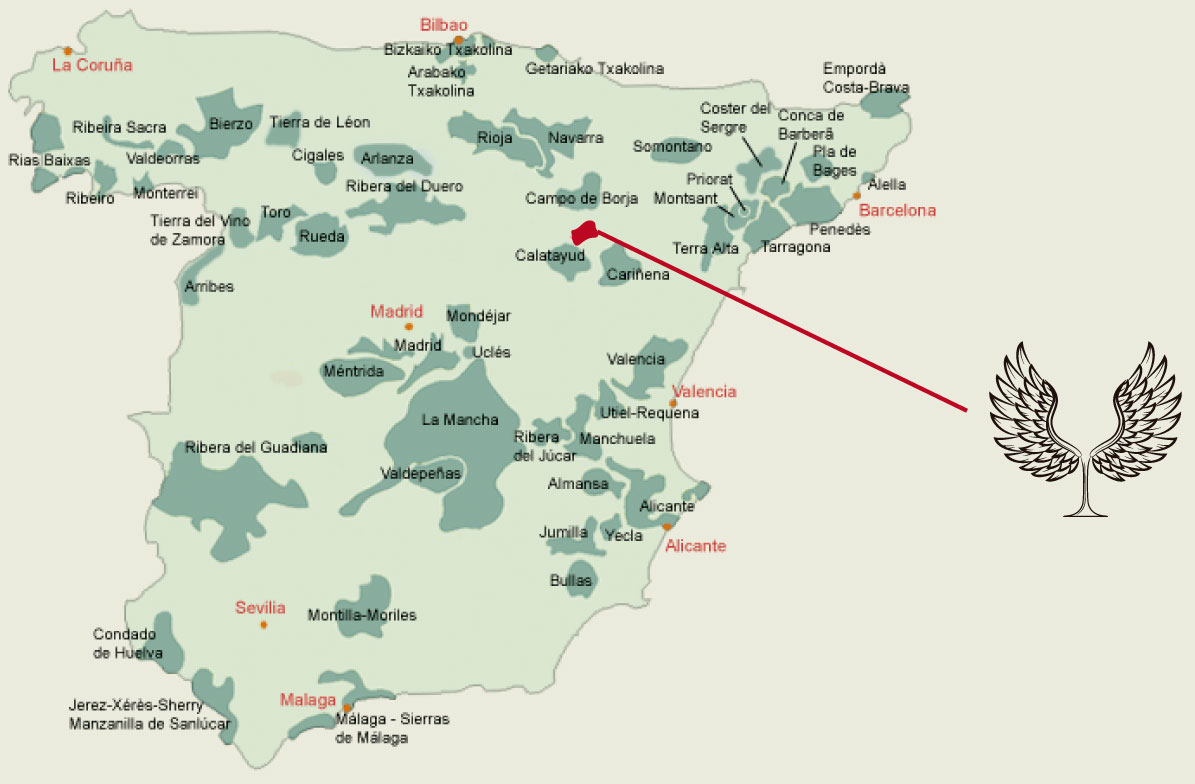 Alpartir is a village of 600 souls. There’s a lot of talk in Spain about despoblación – ‘dispopulation’—of the old villages of the interior as more and more youth flee to the coasts and the three or four largest cities, but Fernando planted his flag here. He lives five minutes’ driving away from 75 percent of his vineyards and twenty seconds walking away from his cellar. And what a cellar. At the top of Alpartir runs a road lined with mostly abandoned centuries-old subterranean bodegas carved out of the roots of the mountains. The only signs above ground are the ‘chimneys’ poking up that ventilate down dozens of meters below, but enter in and you’re immediately in the presence of a cool, damp, ancient culture of wine-raising. Fernando has the 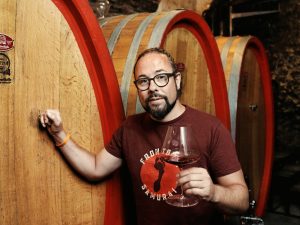 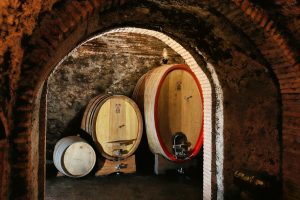 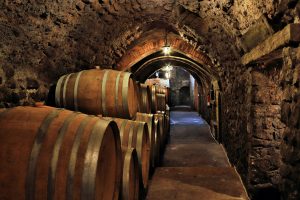 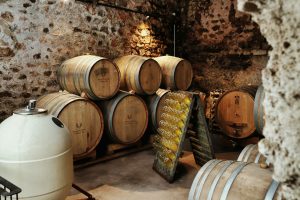 most majestic cellar left in town, originally built at the end of the 18th century. There’s three levels, and by the bottom you’re standing in a frigid, buttress-ceilinged wonderland that looks more like a postcard from Carthusian France than something out of deep Spain. It’s here that Fernando’s miraculous Garnachas and Macabeos sleep the sleep of the righteous.

Of course, ranks of impeccably maintained French, Austrian and Italian barrels don’t have a lot of room to run without being filled with some of the most characterful grapes being harvested in north-central Spain… so upwards we go. Fifty feet and fifty degrees Fahrenheit above, one emerges blinking into the intense sun and dry, clean air of the mountain flanks. Even with the once-thriving cooperatives long belly-up, the village is encircled with vineyards, and Fernando’s spent the last several years painstakingly incorporating the very best of them into his own holdings. (The amount of politics, paperwork, and old-fashioned family drama that go into the purchase of a single hectare in Spain could be the subject of an entirely separate article…) Old vines and pesticide/herbicide-free dry farming are the watchwords here—the earliest-release cuvées are already certified organic, and in coming vintages the longer-elevage wines are soon to follow. Mora’s lowest-altitude parcels sit above 500 meters, and most of them stretch ever upwards into the mountains at elevations of 600, 700, or in the case of Supersónico, an astonishing 1030 meters. Garnacha reigns supreme, and the Garnacha from here in Mora’s hands (he calls himself the Garnacha Samurai) is truly glorious, achieving the finesse and shimmering intensity-without-weight of the world’s great red wines while retaining its own unique stamp. It’s a more fine-boned, delicate creature than its more prestigious cousins, French or Spanish, and I for one am not complaining a bit. Most of the reds at this address are nearly-varietal Garnachas, though the Telescópico preserves an admixture of Mazuela, or Carignan. The white Macabeo also crops up among these old vineyards, and Mora’s no slouch here either, deftly incorporating it into many of the reds (think Syrah-Viognier) and offering electrically mineral varietal interpretations as well.

The offerings here start with the entry-level Microcósmicos, relatively easy-drinking younger varietal wines that pack serious interest and old-vine complexity into amazingly affordable frames. Alone in the cellar they’re fermented and raised entirely in cement for maximum immediacy. The Telescópico red blend delivers the added depth of longer maceration and used-oak elevage. From here we pass to a series of single-parcel wines that, simply put, argue for Frontonio’s place in the upper echelons of the most exicting domaines in Spain. Súpersonico, mentioned above, hails from over a thousand meters above sea level and marries the dusty warmth of deep Spain with the glacial breath of the Alps. Las Alas is a spherically complete, toe-curlingly complex and astonishingly long—a masterpiece. And then there’s the Jardínes.

The date is lost, but sometime between 1898 and 1908 a family called Paseta planted a spectacular sheltered amphitheater in a barranco (side valley) of Alpartir to Garnacha with a sprinkling of Macabeo. They called it Las Iguales. The same family tended the vines for over a hundred years, but never commercialized wine from this north-tilted, slate- and quartz-jagged site. Fernando admired this evidently privileged vineyard for years, and in 2016 he was finally able to buy it and turn it into the backyard grand cru of his dreams. He’s refurbishing the dry stone walls, clearing new and higher terraces for new vines, and separating the white and red grapes from the original old vines into bottlings he calls Los Jardínes de la Iguales. The 2018 white and 2019 red—now present in the tristate area for the first time ever— have already made a profound critical splash, with close observers left only to wonder: how much better can it get?

Mora and the Frontonio team are poised and ready. 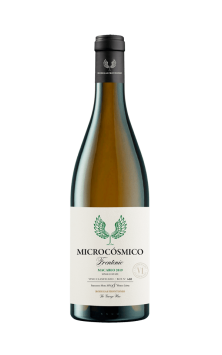 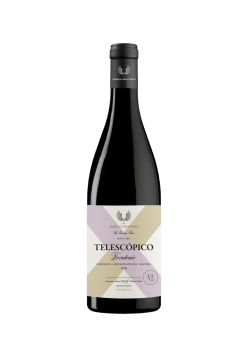 … It really surprised me with its elegance and freshness. It’s floral and perfumed but subtle with great purity and freshness. It transcends the vintage…94 Points, Luis Gutiérrez, Wine Advocate 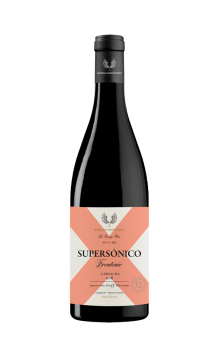 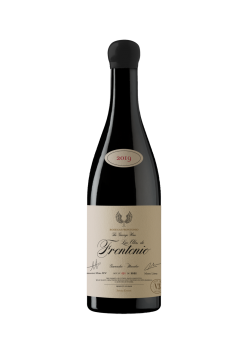 …This has a spectacular nose, subtle and elegant and an improvement even over the great 2018. It’s vibrant and pungent, and the tannins are very fine, slightly chalky and give it a nice texture. There’s a salty twist on the finish…96 Points, Luis Gutiérrez, Wine Advocate

…There is great purity, transparency and finesse here, the wine is elegant and subtle, deliciously floral, with tons of energy in the palate, citrus, mineral and long. It’s floral, but there are also salty notions… It feels weightless, but it has power and energy. This got me gobsmacked. Truly amazing…96 Points, Luis Gutiérrez, Wine Advocate

It’s very pale, subtle and elegant… with some herbal aromas, hints of fennel, celery and curry and tons of flowers and herbs… It’s ethereal and has lots of light and energy, tons of elegance and with a level of refinement and precision that is moving. This wine is better each vintage, more Burgundian in 2019…98 Points, Luis Gutiérrez, Wine Advocate 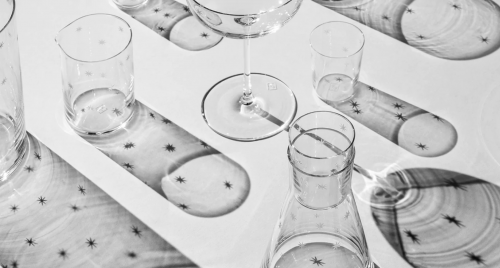 Pour Yourself a (Jancis) Glass & Enjoy Our Top Posts of 2022
WHATTA YEAR. (No seriously, WHATTA YEAR!) We at Skurnik are endlessly proud of our Portfolio Management team, who, among seemingly hundreds of other responsibilities, are frequent contributors to the blog and our social media presence (shameless plug: follow us on Instagram...
Read More