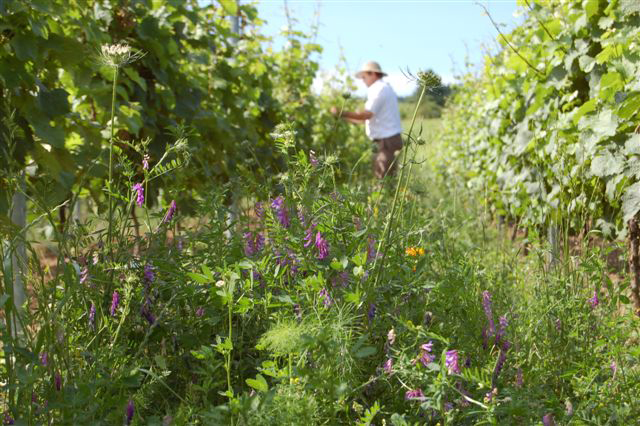 We are very pleased to introduce Goldatzel and the Groß family to our German portfolio.  The estate’s history dates back to 1600’s and is named for a particularly prestigious parcel near the village of Johannisberg in the Rheingau. The current proprietors of this 12-hectare estate form a true family winery. Gerd and Andrea Groß work side-by-side with their son Johannes and daughter Katrin, crafting wines that reflect the unique terroir of their vineyard holdings in this very famous section of the Rheingau. Johannes represents a dynamic and sustainable future for the estate. After finishing his studies at Geisenheim, Germany’s most preeminent school of viticulture & enology, he returned to the family domaine with new ideas while still being deeply committed to the traditions of the house and the legacy of Rheingau Riesling. Goldatzel believes this “classic” style is best preserved through traditional winemaking and respectful viticulture. Each single parcel is treated as a distinct and unique expression of place and vinified separately, so winemaking techniques differ slightly from one wine to another. Generally speaking ambient yeasts are used and whole-cluster pressing is standard.  Elevage is in stainless steel or used casks depending on the site and the wines are bottled on the younger side to preserve primary fruit character.

The main sites are located in three villages: Geisenheim, which borders Rüdesheim am Rhein, Johannisberg, a historic and important village and the ancestral home of Spätlese, and Winkel, just to the east of Johannisberg. There’s a bevy of great vineyards: in Geisenheim the supernal Kläuserweg, probably that commune’s best site: in Johannisberg the great Hölle, giving rampantly powerful wines from its steep slope, as well as the Goldatzel and its crystalline wines with such fastidious chiseled clarity: finally the (Winkeler) Hasensprung shows as it truly should show and all too rarely does, as its boundaries were absurdly extended by the misguided 1971 wine law.

We are excited to introduce Goldatzel and to share these new and very unique wines with you! Geisenheimer Kläuserweg
First mentioned in the 1200’s as “via Clusen” this parcel has been historically regarded as one of the greatest sites in the Lower Rheingau due to the prices the wines commanded in the early era of Rheingau wine export. The vineyards are made up primarily of loam and marl in deep, chalky clay.

Johannisberger Vogelsang
The name of this parcel dates back to 1399 and is a reference to the preponderance of birdlife that still populates the area. Goldatzel’s holding in this area make up part of the famous Johannisberger hill. The top-soils here are made up primarily of gravel and stones with a sandy loam sub-soil. Goldatzel’s vines in this area are over 70 years old.

Johannisberger Goldatzel
The vineyard of Goldatzel is situated directly north of the village of Johannisberg. It is a south-east facing slope. This exposure protects the vines from the potential cold winds due to the vineyard’s elevation (220m above sea level). Quartizite is typical in the vineyards surrounding Johannisberg and can be found here along with löss and loam deposited from the Rhein.

Johannisberger Hölle
Hölle (or “cave”) is a rocky, steep southwest-facing hillside made up of primary rock and Taunus Quarzit. This rugged terrain forces the vines to drive deep into the sub-soil to find water which contributes to a unique concentration within the wines from this area. The early evening draws cold air from the nearby forest preserving acidity in the harvested grapes.

Winkeler Hasensprung
Named for the abundance of hares that populate the area, Hasensprung is situated to the north-west of the village of Oestrich-Winkel. The vineyards are dominated by small, rolling hills and löss-based sub-soils deposited by the Rhein’s retreat into the valley. Due to the cooling effects on the rolling hills, many micro-climates exist inside of the Hasensprung area. Goldatzel works to express the specificity of their particular holdings.