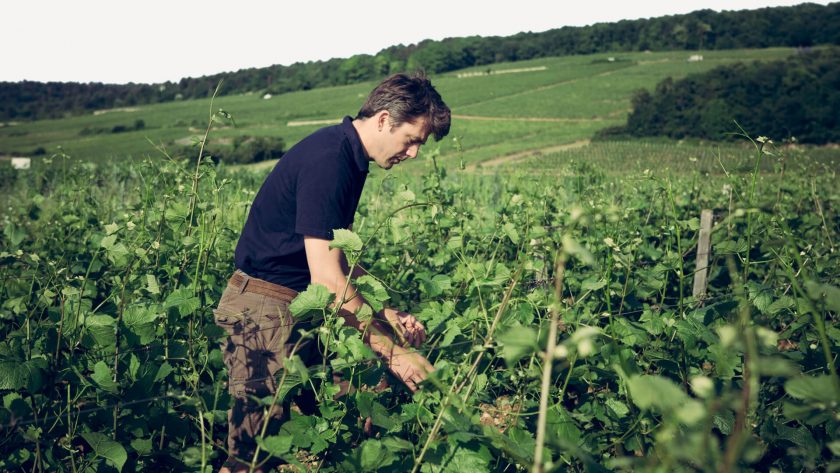 The history of Domaine Arlaud started durng World War II, when Joseph Arlaud (originally from the Ardèche) met and fell in love with Renée Amiot, who came from a historic Burgundian family. Part of the couple’s wedding gifts were parcels of land in the Côtes de Nuits, centered around the top crus of Morey St. Denis and Gevrey-Chambertin. And so Domaine Arlaud was born. Joseph’s son, Hervé Arlaud, took over the estate in 1982 and expanded the domaine with more purchases of prime vineyards, mostly in their home village of Morey St. Denis. Today, the star of the show is Hevré’s son Cyprien, who in the last ten years, has come into his own as one of the most exciting growers in all of France.

Cyprien Arlaud took the reins of the domaine in 1997, and in the same year he was put in charge, he began the conversion of the estate to biodynamics (certified in 2014). He also began using horses to plough his vineyards in order to keep the soils as healthy and alive as possible, without the compaction that can come with the use of tractors. As Cyprien notes, “It’s hard to get good grapes from vines planted on a cement highway.” Luckily for him, his sister Bertille has become one of the most important trainer of horses for ploughing in all of France, providing her services for many top estates across the country. The results from this intense care for the vines became evident very quickly, with wines that spoke of terroir in the clearest of voices.

In the cellar, intervention is kept to an absolute minimum. Under Cyprien’s stewardship, elegance has been the focus, with lower levels of extraction and the reduction of new wood to zero on the Bourgogne and 15-30% on the rest of the lineup. Partial whole cluster is used on the upper level wines (maximum 30%) purely depending on the nature of the vintage and if the stems are perfectly ripe. Their cellar in Morey St. Denis is one of the coldest in the Côtes de Nuits, helping Cyprien pursue a slow, non-interventionist vinification, with minimal use of SO2. All of his wines are also bottled unfined and unfiltered. Meeting Cyprien makes it clear how in touch he is with every meter of vines he farms. He is immensely talented, but also has an insatiable curiosity that allows him to keep learning and keep getting better. And today, there is no question he is one of the finest growers in all of Burgundy.