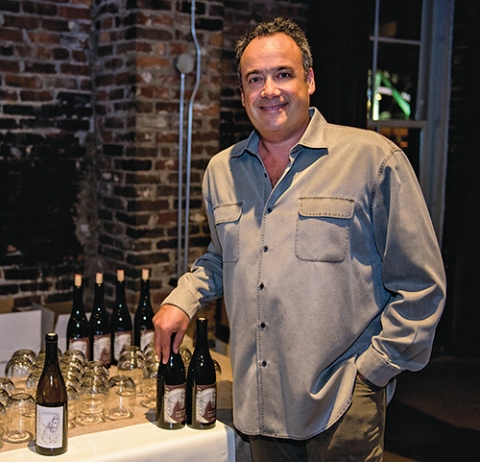 The Withers is a new project focusing on high elevation, cool climate sites that yield exceptional, nuanced and balanced red and rose wines drawing from Rhone varietals grown in the Sierra Foothills and Mendocino County, as well as Pinot Noir grown in the Anderson and Green Valleys and the Sonoma Coast. The Withers was founded by Andrew Tow, a longtime collector and advocate of food friendly, understated, lower alcohol yet deeply flavorful wines, and features as its winemaker David Low, co-founder and winemaker at highly acclaimed Anthill Farms Winery. The name The Withers is an equestrian term honoring Mr. Tow’s wife’s passion for horses, which is defined as the place from which a horse’s height is measured. “We aspire for height in quality, something to reach for, something soulful, and we named our label accordingly,” says Mr. Tow. “One of our horses, a beautiful Irish Connemara pony named Mr. Burgess is featured on all of our labels”.

Mr. Tow has formed many relationships in the Napa and Sonoma Valleys over 35 years, including striking up a friendship some years ago with Mr. Low. “David and I found that we both looked for the same things in various corners of our lives, including wine styles, people, music, and the outdoors”, said Mr. Tow, “and this lead to a trade of a fly fishing trip to Montana in return for an experiment with a few barrels of Pinot Noir and ultimately Rhone varietals”. Those barrels came out so well that what had begun, as a personal project became a commercial one a few years ago. Mr. Tow then developed the program to include single vineyard Pinot Noir from the Sonoma Coastal region, a Syrah dominant blend featuring Grenache and Mourvedre called Mr. Burgess, a Grenache dominant blend featuring Syrah and Mourvedre called Bel Canto, and a Grenache/Mourvedre dry Rose beginning with the 2013 vintage. Limited oak is used in the program, which also employs significant whole cluster fermentations and minimal intervention. “We want to tell true stories about each site. Let the grapes speak for themselves!” says Mr. Tow

The wines include single vineyard and blended expressions of well respected sites, all farmed responsibly and with minimal ecological impact. The Withers draws from Mr. Low’s excellent relationships with growers in high demand and at the top of their fields, literally and figuratively, and Mr. Tow’s relationships on the business side.