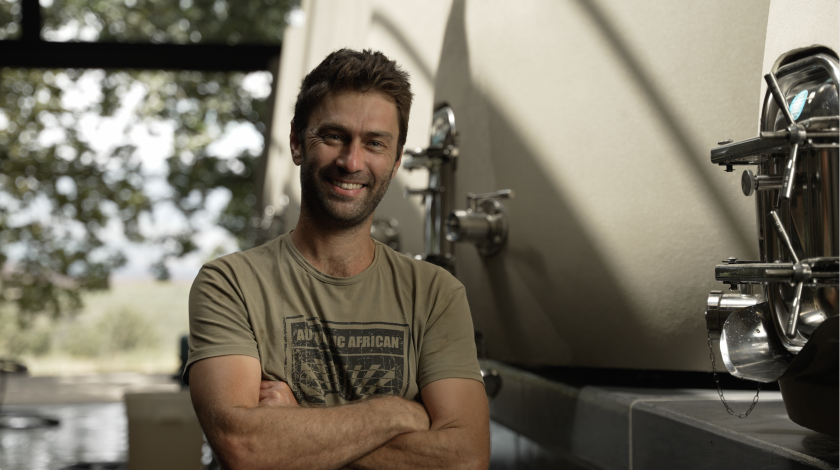 Moya Meaker was established in 2010 by the former owner of Bordeaux’s Chateau Gaby, David Curl and acquired a small farm called Habibi in Elgin. Named after Curl’s mother-in-law, Moya Meaker, who was crowned Miss South Africa in 1959, sought beauty in the overlooked and found joy amidst trial. Every wine produced in the Moya Meaker range seeks to honor her spirit. The farm was planted mainly to apples, but also included some small parcels of Pinot Noir, Riesling, and Chardonnay at 320 meters above sea level. The farm sits on a ridge of ancient Bokkeveld shales and is surrounded by Hottentots-Holland, Groenland and Kogelberg Mountains and the cool Atlantic Ocean winds make it South Africa’s coolest wine region. With a wide diurnal range between daytime and night-time temperatures, this is paradise for Burgundian style Pinot Noir and sky high acid driven Riesling.

Jean Smit is the winemaker at Moya Meaker, and has worked alongside some of the best winemakers in the world. Smit has made Pinot Noir with DuMOL’s Andy Smith in Russian River Valley, completed harvests with Wither Hills in Marlborough, studied Syrah under Burgundian-trained Stéphane Ogier in Côte Rôtie, and spent time at Napa Valley’s Larkmead Vineyards. On the home front, he’s worked alongside some of South Africa’s venerable wine legends like Adi Badenhorst at Rustenberg, and spent almost a decade at Boekenhoutskloof as Chief Winemaker. This incredible journey as a winemaker made Smit an appealing candidate to capture the essence of what Elgin can offer to the world and we’re incredibly excited to see how this project develops.