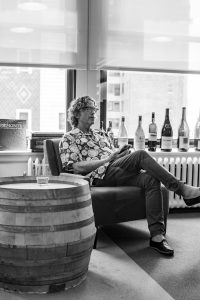 In 1977, after graduating from the University of Massachusetts, Michael took a job waiting on tables on top of the World Trade Center, at Windows on the World. He left his job as a waiter to become assistant to Windows’ world-famous sommelier, Kevin Zraly, where his exposure to fine wines was unparalleled. Michael left Windows in 1980 to sell wines on the streets of Manhattan for a local fine wine distributor. Soon after that, Michael moved on to become the national sales manager for a well-known French Burgundy negociant, overseeing their national distribution, and traveling extensively to markets throughout the United States to promote the fine wines of Burgundy and Beaujolais.

In 1987, with a few dollars and a commitment to excellence, he founded what was then called “Michael Skurnik Wines” and started by procuring a few boutique wineries from California. The rest is history. The business grew rapidly and now over 30 years later, Skurnik Wines & Spirits represents a well curated, hand-picked, diversified portfolio of over 500 wineries & distillers from all over the wine and spirits world, and proudly employs over 180 people.