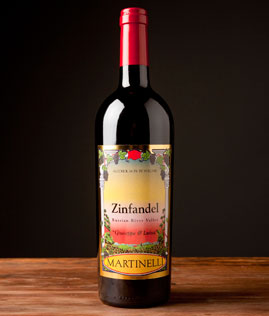 The year was 1899 when Giuseppe and Luisa Martinelli planted three acres of Zinfandel in the Russian River Valley. The old vineyard is now known as Jackass Hill and remains the steepest non-terraced hillside vineyard in Sonoma County. Nearly one century later Giuseppe and Luisa’s grandson, Lee Martinelli Sr., followed in their footsteps by planting a Zinfandel vineyard. He grafted bud wood from the centurion vines onto de-vigorating rootstocks and planted them one meter by two meters apart, equating to about 2,000 vines per acre, on a rocky knoll above the Martinelli Winery Tasting Room.

The grapes are picked between 25 and 26 degrees brix. After picking, the whole berries undergo a long cool fermentation to generate skin contact and expose fruit character and are fermented with wild yeast. The juice is transferred to oak barrels with a touch of residual sugar remaining to complete the fermentation process in barrel until dry. It rests in 33% new French oak on its gross lees for ten months. The finished wine is un-fined, un-filtered, neither cold nor heat stabilized and contains naturally occurring sediment.

2019
parker
Score
97
Date
2021-02-04
"Medium ruby-purple in color, the 2019 Zinfandel Giuseppe & Luisa bursts with singular aromas of dried lavender and citrus peel, smoky, mineral-like undertones and loads of exotic spices over a core of wild berry preserves and peaches. It's incredible in the mouth, its full flavors delivered in a silky, ultra fresh and lifted frame, and it finishes with loads of floral nuance. Wow! 1,653 cases produced."
2019
vinous media
Score
95
Date
2021-01-01
"The 2019 Zinfandel Giuseppe & Luisa shows all of the intensity of the Martinelli wines, but with an extra kick of floral overtones and acid brightness to perk things up. Cinnamon, crushed red berry, wild flowers, mint and blood orange all run through this expressive, silky Zinfandel. The blend of Jackass Hill and Jackass Vineyard Zinfandel clones on four different rootstocks, which results in different ripening cycles and harvest times, all of which translates into notable complexity in the finished wine."