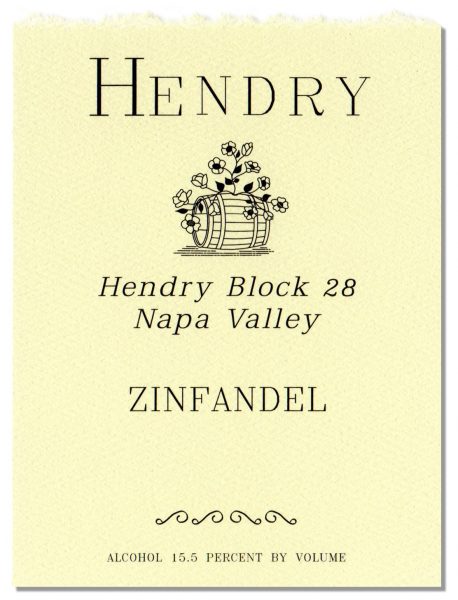 Hendry Block 28 is located on bench lands west of the town of Napa. This 4.17-acre block is 160 feet above sea level and has thin, stony soils referred to as “Boomer Series.” Morning fog and strong afternoon breezes from San Pablo Bay moderate the maritime climate.

The vines were planted in 1998 using St. George roots and grafted with budwood selected from an old-vine Zinfandel vineyard on Mt. Veeder called the Brandlin Ranch. The vines are spaced 6.9′ x 5′, cordon-trained and spur-pruned. A vertical trellis system supports the cordon and the canopy.

In the early years of Hendry’s winemaking endeavors, George farmed the vines on Brandlin Ranch in exchange for the fruit. The old-vine Zinfandel there was of mysterious lineage, and produced complex, intense, spicy fruit. When the vineyard was sold, George was able to obtain budwood from those vines to graft onto rootstock in Block 28.

In 2016, bud break in Block 28 occurred April 4th. Bloom was May 23rd and veraison occurred on August 6th. Harvest was September 13th, with a yield of 4.08 tons per acre. Bloom-to-harvest period was 117 days. The alcoholic fermentation was completed in approximately one week in closed fermentation tanks. The wine was then pressed and put into barrels for malolactic fermentation. Aging was fifteen months in French oak barrels, approximately 65% of which were new.