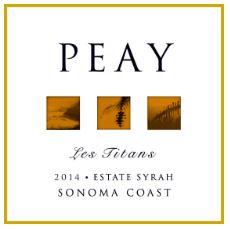 The Les Titans has everything you could hope for in cold climate Syrah with grace and focus and none of the one dimensional, heavy, leaden quality found in lesser wines. I suggest you drink a bottle upon release to see what is so exciting and then open a few every few years to watch it evolve into the single best Les Titans – and maybe even Syrah – we have ever made.

Score:
94+
Date:
2020-04-01
Review:
While Peay's Syrah La Bruma is accessible today, the 2017 Syrah Estate Les Titans is anything but. Powerful and tightly wound, Les Titans shows the more savory side of Syrah. Inky dark fruit, cured meats, black pepper, sage, smoke and grilled herbs infuse the 2017 with striking varietal character. Bold and pungent, with tons of Syrah character, the Titans dazzles from the very first taste. I won't be surprised if it is even better in another few years' time. For now, though, the 2017 is one of the most austere, young Titans I can remember tasting.
View at Google Maps


By now, most are familiar with the recent string o