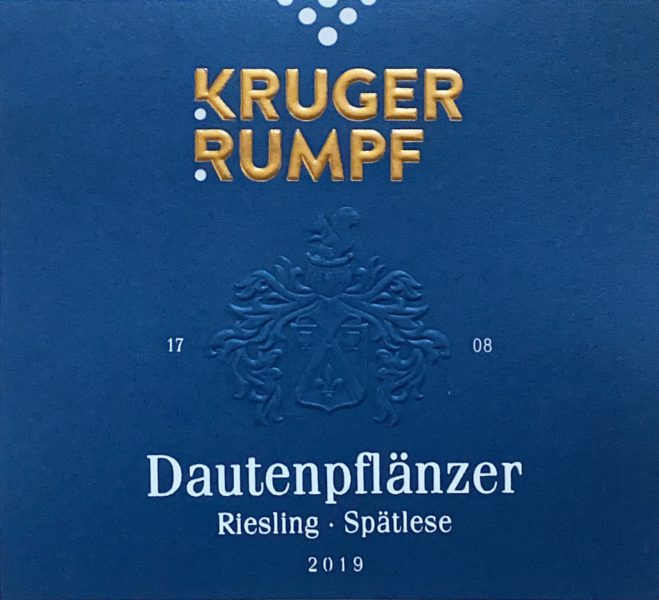 Dautenpflänzer is the “filet piece” of the Kapellenberg vineyard. The steep 40 % slope between 100 and 200 metres a.s.l. faces south-southeast in side valley of the Nahe that is protected from the west wind. The soils are quartzite and Devon slate covered with a layer of loess-loam with good water storage capacity. The main variety cultivated is Riesling. Name origin: The word “Daute” means young seedling and “Pflänzer” means planter. This leads to the assumption that young vines were once bred here.

2018
vinous media
Score
92
Date
2020-06-05
"An effusively fruity nose anticipates the generously juicy peach and nectarine that feature on a glossy palate, with a hint of almond paste as well as pronounced sweetness tugging things in a confectionary direction. Happily, an influx of limey brightness and tangy fresh-fruitedness serve for welcome pushback as well as animation and refreshment on a long-lasting finish. As with others of the best Kruger-Rumpf 2018s, this manages to combine richness and high ripeness with brightness and transparency to stony inflections. That juxtaposition may have been underscored in the case of this Spätlese by its having been raised partly in cask and partly in tank."
2017
vinous media
Score
91
Date
2019-04-18
"Raised entirely in cask, this leads with wafting, musky peony accompanied by scents of ripe peach and fig. The glossy, buoyant palate is correspondingly fruity and laced with inner-mouth perfume. The finish is pure and lusciously lingering, albeit (at least for now) without the mineral counterpoint displayed by the best 2017s from this estate."