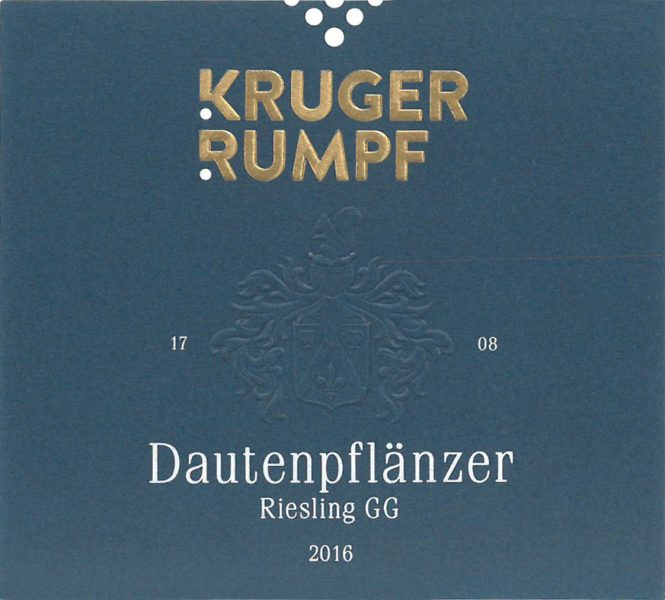 Region Nahe
Grape: Riesling
Region: Nahe
Vineyard:  Sourced from vines that are up to 50 years old in  the Dautenpflänzer Grosse Lage (Grand Cru)
Soil:  Slate
Production: Fermentation is entirely in Neutral stuckfass (Hösch) until the end of April. The wine is  racked into steel in May and bottled a month later in June.
Classification: VDP.GROSSE LAGE®

Produced from a very steep, south facing section of old vines, planted in the 1950s. The vine material is a very old Nahe Clone (365 Finkenaurer, the name of the winery where this was selected in Bad Kreuznach) and no herbicides or no chemical fertilizers are used. Harvested in second and third week of October at 45 hectoliters per hectare, grapes are harvested and pressed whole cluster with skin contact for 6-8hours –maceration occurs in the press prior to pressing. Fermentation is entirely in Neutral stuckfass (Hösch) until the end of April. The wine is  racked into steel in May and bottled a month later in June.

Dautenpflänzer is the “filet piece” of the Kapellenberg vineyard. The steep 40 % slope between 100 and 200 metres a.s.l. faces south-southeast in side valley of the Nahe that is protected from the west wind. The soils are quartzite and Devon slate covered with a layer of loess-loam with good water storage capacity. The main variety cultivated is Riesling. Name origin: The word “Daute” means young seedling and “Pflänzer” means planter. This leads to the assumption that young vines were once bred here.

2019
james suckling
Score
94
Date
2020-09-17
"Generous and juicy (apricot) with plenty of substance, but thankfully bone-dry and that really helps keep it very clean and straight. Long, mineral finish. Drink or hold."
2017
vinous media
Score
91
Date
2019-04-18
"Crushed lemon pip, bruised apple skin, peppermint and caraway on a pungent nose set the stage for a pithily concentrated inner-mouth performance at once cooling and invigoratingly biting trigeminal. The feel is full and firm, and the finish piquantly gripping, featuring just enough lemon and apple juiciness to refresh. It will be interesting to witness whether a more vivid fruit character or some of the floral elements I often associate with this site emerge in time."
2016
parker
Score
91
Date
2018-03-01
"From quartzite soils with loess and slate and fermented in 1,200-liter oak vats, Georg Rumpf's 2016 Nahe Riesling (Münsterer) Dautenpflänzer GG is round, rich and juicy on the palate but also light and well structured by fine and grippy tannins. Very long finish. Drink 2020-2032."
2016
vinous media
Score
93-94
Date
2018-04-26
"This represents a second cask of potential Grosses Gewächs and hadn’t yet been bottled or even racked from its lees when I tasted it in August 2017. It remains to be seen how it will be labeled to get around the VDP proscription on two legally dry wines from the same vintage labeled for the same “Grosse Lage.” “The first lot [which was bottled as Grosses Gewächs] was expressive at only three grams of residual sugar, while I found this one with seven or eight grams so exciting that I wanted to bottle it as is. Besides,” explained Georg Rumpf, “attempting a blend of the two revealed that neither one did anything for the other.” The fascinating herbal and root vegetable characteristics, along with the bright lemony acidity of this year’s Grosses Gewächs, are here allied to a more richly textured palate and share billing with lusciously ripe white peach. The finish not only glows with piquancy and delivers infectious juiciness but also adds a vibrant sense of active, crystalline mineral impingement. Just as Georg Rumpf had anticipated and wished to demonstrate, additional time on the lees hasn’t in the least inhibited clarity, not even when tasting from the cask. (Nor has a bit more residual sugar done any harm.) “This is the direction I want to go,” said Georg Rumpf, summing up his impressions. That sounds good to me!"