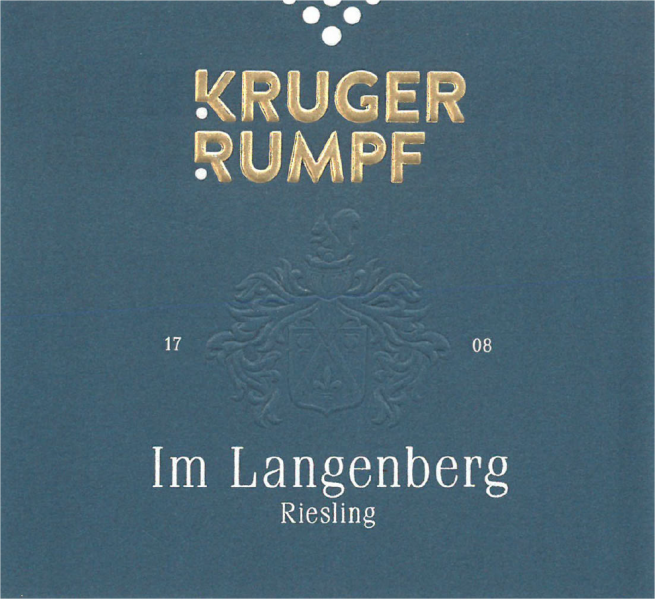 “Originally this wine was supposed to be a dry wine, however, the wine did not completely stop the alcoholic fermentation and thus it retained natural residual sweetness. Instead of drying it with pure yeast for bending and breaking, we filled the wine after a nine-month barrel maturation as it was.” Says Georg

Langenberg is located in the middle of the Kapellenberg vineyard slope between 120 and 180 metres. The six-hectare site faces south-southeast with a 20 – 40 % slope. The Grosse Lage borders the Dautenpflänzer to the east. The soil is quartzite and Devon slate covered with loam, which contributes to good water storage capacity. Langenberg is well protected from the wind due to its location in a side valley of the Nahe below the Münster fores

James Suckling
Score
93
Date
2020-09-17
"Only just medium-dry, this has an impressive depth of peach and citrus fruit, married to a serious structure and excellent minerality at the succulent, long finish. Drink or hold."

2018
vinous media
Score
92
Date
2020-06-05
"Succulently ripe honeydew melon and tangy apple are reinforced by very subtle sweetness from 14 grams of residual sugar. Ashen and stony undertones emerge on a ringingly clear, mouthwateringly salt-tinged and infectiously juicy finish. While at 12.5% this is only marginally lower in alcohol than its Dautenpflänzer Grosses Gewächs counterpart, it manages to evince a welcome sense of buoyancy. (For considerable background on this bottling, including its naming, consult my tasting note on its superb inaugural installment, vintage 2017.)"
2018
parker
Score
93
Date
2019-10-19
"From a cadastre vineyard in the Dautenpflänzer, the 2018 Im Langenberg Riesling is a grand cru vat that—thankfully!—didn't ferment dry. Bottled with 14 grams of residual sugar, this is a lush and tight, very mineral Riesling with a hidden sweetness that gives joy to this otherwise all-too-challenging Riesling. This is a filigreed and persistent, firmly structured Riesling with salt and lemon flavors on the finish. Concentrated mirabelle plums on the nose. Awesome! 12.5% alcohol. Tasted in July 2019. Drink 2020-2040."
2017
parker
Score
93
Date
2019-10-19
"The 2017 Im Langenberg Riesling is concentrated and ripe on the nose and displays some honey and wholemeal bread as well as caramel flavors. Round and lush on the palate, this is an intense and concentrated, vital and generous Riesling that doesn't taste really sweet but is intense and fruity, with a long and tight, mineral finish. Tasted in July 2019. Drink 2023-2040."
2017
james suckling
Score
93
Date
2018-09-26
"This is a stunning, harmonious dry riesling that is sleek and intense, juicy and serious with a racy and complex finish. Drink or hold."
2017
vinous media
Score
93
Date
2019-04-18
"“This is what was once our Dautenpflänzer Spätlese halbtrocken, but with a new name,” says Georg Rumpf. The significance of “Im Langenberg” – besides its being, naturally, the cadaster name for where the wine grew – is that the estate wants to promote this wine, alongside its Grosse Gewächse, as a “VDP-Grosse Lage” bottling, but the VDP wouldn’t countenance two-such wines labeled merely for “Dautenpflänzer.” The inspiration for this bottling’s “hidden sweetness” (resulting from residual sugar only a little bit in excess of legal Trockenheit) is the same as that for the last three vintages of Münsterer Im Pitterberg Kabinett, namely Stefan Rumpf’s desire to see this style revived. “And I think it fits 2017 especially well,” notes son Georg. He can say that again! Wreathed in honeysuckle perfume, mirabelle, papaya and grapefruit waft from the glass, then burst onto the polished palate with infectious juiciness. What a striking comparison this makes with the corresponding Grosses Gewächs: A small difference in residual calls forth what I think of as Dautenpflänzer’s site-typical fruitiness and florality. Not that there is any lack of spicy or mineral impingements here; on the contrary, caraway, Ceylon tea, crushed stone and salt serve for intrigue and saliva-inducement in a multi-layered, buoyantly-sustained finish. Incidentally, at 12.3% alcohol this bottling is nearly a full percentage point lighter than its Grosses Gewächs counterparts, a difference accounted for by the fact that the latter is quite radically dry."