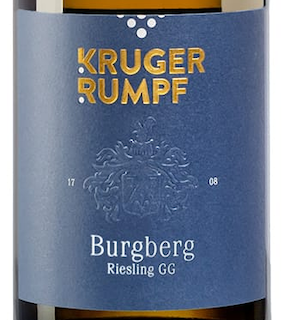 James Suckling
Score
96
Date
2020-09-17
"Very smoky and herbal with grapefruit-zest and pith notes. A powerful, warm and muscular wine, but not a jot heavy, thanks to the driving, mineral acidity that makes a serious statement. Great aging potential. Drink or hold."

2018
parker
Score
93
Date
2019-10-19
"From low-yielding vines planted in the 1950's and 1960's, the 2018 Burgberg Riesling GG is absolutely great on the pure, clear and refreshing, super flinty and mineral nose. On the palate, this is an intense, highly complex and elegant dry Riesling with crystalline acidity and a long and refreshing, crystalline and salty finish. Bottled and tasted in July 2019. Drink 2022-2035."
2018
vinous media
Score
93
Date
2020-06-05
"Scents and luscious palate presence of white peach, yellow plum and grapefruit are wreathed in iris. Gloss and textural plushness – there is an almost doughy midpalate impression – are allied to a striking finishing sense of buoyancy and clarity. The salinity tugs at the salivary glands and, along with the wine’s sense of animation, leaves the tongue quivering. I tend to believe that the conjunction of such pronounced salinity and the site’s high percentage of quartzite is more than mere coincidence, though it would be nice to learn of relevant scientific investigation."
2017
vinous media
Score
92
Date
2019-04-18
"Sea breeze and fresh lime on the nose set the stage for a mouthwateringly mineral, animatingly bright and zesty performance. Full-body from over 13% alcohol fortunately doesn’t manifest itself as any sense of heaviness. There is more pit than flesh of the peach, but enough citric juiciness is present to refresh, and to – along with saliva-drawing salinity – take the edge off of austerity in a seriously-sustained finish that is as adamantly chalky and pointedly piquant as it is vibrant and juicy. (Because of the small 2017 harvest the estate elected not to vinify or bottle a village-level Dorsheimer “second wine” since the fruit from Burgberg is first-class.)"
2017
parker
Score
94
Date
2019-10-19
"From an old plot planted in the 1950's, the 2017 Burgberg Riesling GG comes from volcanic soils with quartzite elements. Deep, ripe, very fine and elegant on the nose, this is a concentrated, deep, very fine and singing dry Riesling that combines richness with great finesse and a vitalizing minerality. A great dry Riesling from the Nahe. Tasted in July 2019. Drink 2019-2040."