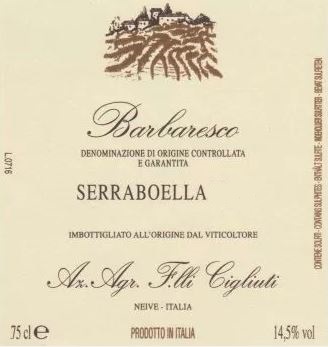 Score:
93+
Date:
2020-10-22
Review:
The 2017 Barbaresco Serraboella captures all the best the vintage has to offer. Floral and lifted, the 2017 is a bit more red-fruited and lighter in body than most vintages, but it has plenty of depth as well. A more gracious, finessed side of this Neive cru emerges over time. The 2017 is a sensual, arrestingly beautiful Barbaresco from Cigliuti, although it has plenty of tannic grip. In 2017, the Serraboella doesn’t have the heft and darkness of most years, but at the same time, it reveals a different facet of this site, which is quite intriguing. Sadly, yields are down 80%. The Serraboella is typically done in a combination of cask and smaller barrels, but yields were tiny, only enough to fill a single cask. My impression is that the Serraboella could turn out to be one of the hidden gems of 2017.
View at Google Maps


Joostenberg is a small, family owned and managed w