“Despite being located in one of the very best areas in Chianti Classico & boasting a superb track record, Rocca di Montegrossi remains one of the most under-the-radar estates in Chianti Classico, and Italy, for that matter. Proprietor Marco Ricasoli-Firidolfi crafts deep, powerful wines that capture the essence of Monti, a sub-zone of Gaiole that has long been prized for the personality & pedigree of its reds. The estate’s Chianti Classico is often one of the best wines in its class, while the flagship San Marcellino & Geremia are reliably outstanding.”
—Antonio Galloni, Vinous

The Ricasoli name is inextricably linked not only to the history of Chianti, but also to the history of Tuscany. Geremia, the founder of the Ricasoli-Firidolfi family, established a castle (Rocca) at Montegrossi in the 7th century AD. In 1141, Castello di Brolio passed into the family holdings and the Ricasolis entered into the wine business. It was here that the so-called “Iron Baron” Bettino Ricasoli created the “recipe” for Chianti in 1872. Flash forward to today, and his relative, Marco Ricasoli-Firidolfi, is once again making history in the family’s ancestral lands.

Marco’s father planted the San Marcellino vineyard at Rocca di Montegrossi in 1966, coincidentally the year of Marco’s birth. With the tragic passing of his father in 1972, Marco’s mother took over production of the wines, elevating them to international fame in the 1970s and 1980s. Marco joined the estate in 1994, and dedicated himself to crafting great wine. To that end, he built a new cellar for Montegrossi in 1999 (including a space to age his beloved vin santo), and at the same time cultivated his philosophy of wine production. Quality was always paramount, but respect of the environment and the conservation of natural resources was also of crucial importance. In 2006, he started the laborious process of converting to organic viticulture, which was officially completed in 2010. Marco uses solar panels to source some of the energy necessary for his cantina, while the remainder is taken exclusively from certified renewable sources. Large cisterns are also used to gather rainwater for farm work in order to save precious drinking water.

Rocca di Montegrossi is located in Monti in Chianti close to the Romanesque church of San Marcellino.  Long regarded as one of the finest sections of Chianti Classico, Montegrossi boasts such neighbors as Montevertine, Badia a Coltibuono, & Riecine. The estate encompasses about 100 hectares; 20 of which are planted to vine, another 20 are olive groves, and the remainder is forest. The vineyards are on gentle south and southeast-facing hillsides with calcareous loamy soils, at elevations between 340 and 510 meters above sea level. The primary grape variety is Sangiovese (13 hectares), followed by Merlot (2.5 hectares), with remaining 4.5 hectares planted to Canaiolo, Colorino, Cabernet Sauvignon, Pugnitello, and Malvasia Bianca del Chianti.

The estate produces two wines with the Chianti Classico designation. Both are based on Sangiovese, which in this area yields an extremely elegant, balanced wine with pleasant minerality. To further increase the complexity of the wines, three complementary indigenous varieties are added: Canaiolo, Colorino, and Pugnitello. ‘Geremia’ is the estate’s IGT wine comprised of 70% Merlot with 30% Cabernet Sauvignon. A rosato is also produced in small quantities. The crown jewel of the estate is the vin santo, produced in a painstakingly traditional manner according to Marco’s mother’s original specifications.  Marco is assisted at the estate by consulting enologist, Attilio Pagli. 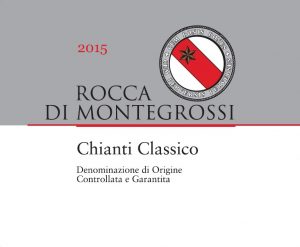 Chianti Classico 2015
The estate’s flagship wine: a blend of about 90% Sangiovese, with 10% Canaiolo and Colorino. The wine ages mainly in large cask and barrels made with Allier oak for 12-24 months.  After being bottled unfiltered, it ages another 6 months at the estate prior to release. Annual production: 50,000 bottles. 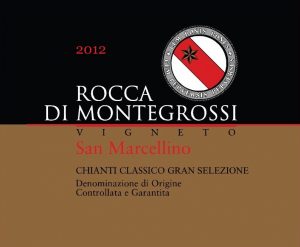 Chianti Classico Riserva Gran Selezione ‘San Marcellino’ 2013
This wine is produced only in great vintages, using the finest grapes selected from the San Marcellino vineyard that surrounds the Church of San Marcellino in Monti in Chianti.  This area is comprised of a total of 7ha, where Sangiovese (1.5 hectares of which are 50 years old) are joined by 0.9 hectares of Pugnitello, an old indigenous Tuscan grape that perfectly complements Sangiovese, bringing out its color, structure and aromas. Since 2006, the San Marcellino cuvee has included 5% Pugnitello. The wine ages for 24 months in medium toast Allier barriques. It is bottled unfiltered to preserve its elegance and freshness, and aged in bottle for at least 24 months prior to release.  Annual production: 18,000 bottles. 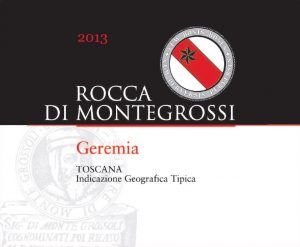 IGT Toscana ‘Geremia’ 2013
‘Geremia’ expresses the terroir of Monti in Chianti with the Bordeaux varietals Merlot and Cabernet Sauvignon (70% and 30%, respectively). It ages exclusively in medium-toast Allier French oak barriques for 24 months, after which it is bottled without filtration and bottle-aged for an additional 18 months.  Available only on top vintages. Average production: 15,000 bottles. 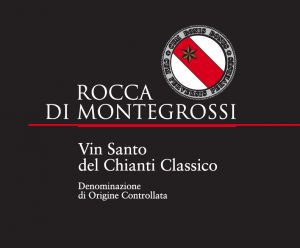 Vin Santo del Chianti Classico 2007
Produced from 100% Malvasia Bianca del Chianti, which is especially well-suited to the production of this wine thanks to its aromatic richness, the thickness of its skins, and its tendency to oxidize. The bunches of grapes are hung one-by-one on nets in a well-ventilated area under the rafters of the cantina. During the drying phase the grapes are affected by noble rot, which confers distinctive characteristics. This pressing generally takes place in the January following the harvest. At the end of this 3-4 month period the grapes are quite concentrated, with high sugar contents. They are pressed gently and the must thus obtained goes into small casks (50 and 100 liter) of a variety of woods (cherry, oak, mulberry) in which it ferments and ages for a period of 6-7 years.  Annual production is less than 2,000 375ml bottle – a truly miniscule amount (the yield of grapes into wine is less than 10%!).