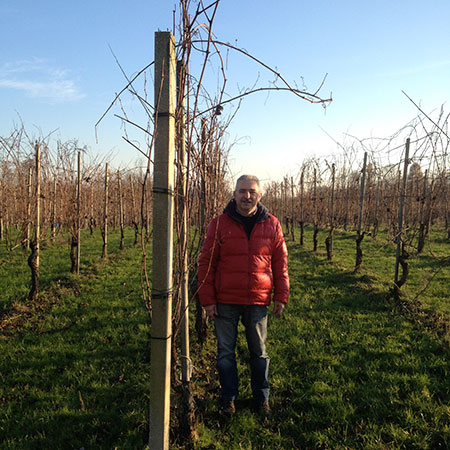 Talk about tradition—in the archives of the city of Turin, the Mazzoni family has traced their history in the Ghemme area back to the 1300s! In their town archives of Cavaglio d’Agogna, where the cantina is located to this day, there are documents that attest to a Matteo Mazzoni renting a house with a wine cellar and a shop in 1502. But like many families in this part of Italy, the Mazzonis gave up farming with the industrialization of the area. Tiziano Mazzoni’s father abandoned life as a farmer for the sure paycheck of industrial Italy. At the time, he did not feel that he had a choice. But things were altogether different for Tiziano—it was his generation to rediscover a passion for the countryside and its wines. Over several years of driving down to enjoy the offerings of the Langhe, he decided to challenge himself by purchasing some prime vineyards near his home. In 1999 he reconnected to his family history by acquiring 1.5 hectares of Ghemme, replanting one part of the vineyard, but leaving about a half a hectare of vines planted in 1968 for his top wine. Current production of the estate is only 1250 cases from 4.5 hectares, and all farming is practicing organic. From the beginning, his vision was to let the wines speak for themselves. Longer fermentations, no new oak, 100% Nebbiolo—they transmit the terroir of Ghemme in an open and honest way.