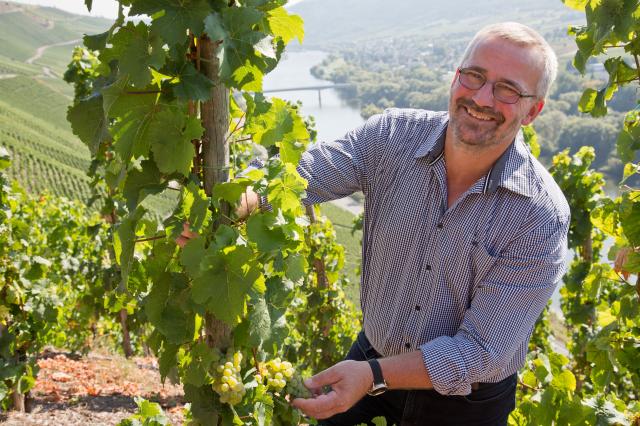 Since 1337 the property at Meulenhof has shifted between royalty and Cistercian monks, following Napoleonic secularization, and since 1919 has been led by the Justen family, with Stephan Justen at the helm since 1990. Located in the Middel Mosel village of Erden, one can see why the estate vineyards were most attractive to both the Counts of Sponheim and the Cistercian Convent- holdings in the steep, terraced Erdener Treppchen and prestigious Prälat have long been revered for their superior wines, and upstream the Devonian blue slate of the Wehlener Sonnenuhr produce wines of intense minerality and elegance. The Prälat may be one of the most iconic terroirs in the Middle Mosel. A tiny 2.2 hectare site sandwiched between the Treppchen and the Ürziger Würzgarten, entirely south-facing, with pure red slate soils, the site is naturally enclosed by cliffs and outcroppings which shelter the vines and make the Prälat one of the warmest sites in the entire valley. If there were a Mosel vineyard pre-destined for Auslese, it would have to be the Prälat. There are only a handful of owners in the Prälat and Meulenhof is one of them. Meulenhof’s vines in both the Prälat and the Treppchen are mostly ungrafted; Stephan is one of the last few vine growers with original rootstocks in this area. Vines on the steep slopes are post-trained, which requires a significantly higher amount of labor, with the cuttings from pruning shredded to provide compost for the vines. Fruit is hand harvested, each parcel is vinified separately in cask, and the must is clarified before indigenous yeast fermentation, both essential at Meulenhof.

In June we hit the road in California to properly introduce ourselves with a series of tastings in San Francisco,...
Read More
View at Google Maps