We’re very pleased to announce our partnership with Sébastien Mouzon, from Mouzon-Leroux; Skurnik Wines is now the exclusive importer for these outstanding champagnes in all 50 states.

These are some of the most exciting wines we’ve tasted in a very long time –  pure expressions of Verzy Grand Cru, one of the most interesting and diverse terroirs in the Montagne de Reims. Sébastien Mouzon is producing certified organic wines and practicing biodynamic viticulture. He is one of the so-called “third wave” of grower-producers—marking those producers of a new generation, who are pushing the boundaries of what’s been done in this region, similar to Cédric Moussé, Benoit Dehu, and Aurelien Suenen. Sébastien’s interpretation of Verzy is refined but also unadorned and without pretense. They are delicious wines, thoughtful, restrained, mineral, and incisive; if you’re looking for creaminess you won’t find it here.

Verzy is a terroir that’s often included in the blend of wines from this part of the Montagne – the trio of Grand Crus – Mailly, Verzenay (the most famous of the three) and Verzy.  Lallement and Pehu-Simonnet for example, have holdings in Verzy but these are always blended with the more powerful Verzenay fruit. Unlike Ambonnay or Bouzy, the two powerful, south-facing Montagne Grand Crus, Verzy faces north-east, producing wines with more finesse, tension and a higher register. Mouzon’s wines are mineral and quieter than their more powerful counterparts in Verzenay. Sébastian Mouzon describes the differences between Verzenay and Verzy in this way: “In Verzenay, the mineral is inside the fruit. In Verzy, the fruit is inside the minerality.” This is a crystalizing way two think about these two villages.

Sébastien Mouzon recently took us on a tour of his vineyards. He’s a very open and energetic person and his enthusiasm for what he’s doing is contagious. There are three distinct hills in the Verzy, he explained while digging up soil samples and the village is really three distinct terroirs: 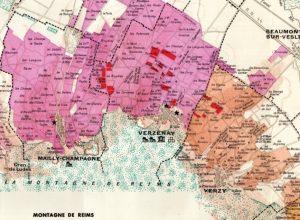 Sébastien started as the 9th generation of the family to grow grapes in this village and officially took over in 2008, though his first vintage was 2009. He was interested in farming organically, in using biodynamic treatments and indigenous fermentations from the beginning. Fermentations are now done pied de cuve – collecting a small preharvest, fermenting that small amount of wine naturally, as a “starter” for inoculating the different tanks with the indigenous yeast. Sébastien preharvests 20 berries from each vine for this; the thinking goes that the individual yeast strains will recognize each other in each parcel.

The estate is just over 7 hectares, almost all in Verzy, split over 50 different plots. Almost sixty percent of the vineyards are planted to Pinot Noir, while Chardonnay makes up just under 40 percent with four percent Arbanne, Petet Meslier, Pinot Blanc and Pinot Gris. Viticulture is certified organic and tinctures of horsetail, dandelion, wicker, nettle, yarrow and oak are used in addition to the biodynamic horn manure 500 preparation. Horses are used for ploughing and sheep are used to control cover crops. Grapes are harvested with high physiological ripeness; with biodynamic viticulture allowing for balanced sugar ripeness. Fermentation and elevage is done in a mix of steel tanks and 500-liter, 4 to 5-year-old Jadot barrels, the only estate in Burgundy that has their own tonnellerie.

Sébastien feels that these barrels are a perfect foil for his wines. Malolactic is always allowed, as this lets Sébastien use less sulfur. There is no filtration on any of the wines and no collage; the addition of riddling aids to keep the lees from sticking in the bottle. Alcoholic fermentation is natural, using pied de cuve and the secondary fermentation is done with “Quartz”, the selected yeast from Fleury, the biodynamic producer in the Aube. The wines aren’t filtered, and the amount of sulfur used at the estate is very low.  Sébastien feels, as many growers do, that a period of aging after disgorgement is necessary. None of the wines are released before they have rested on the cork after disgorgement for at least 6 months.

Sébastien now belongs to the Club Trésors and later this year his first Spécial Club, 2012, will be released. I haven’t tasted it yet but based on the strong character of the other wines, I imagine it’s a masterful wine. 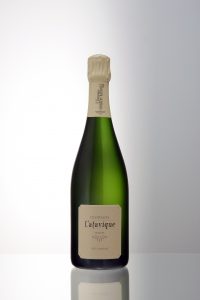 The current release is 80% 2013 and 20% 2012-2011, 65% Pinot Noir, 35% Chardonnay, 25% vinified in oak barrels and 75% in small vats. En tirage for 32 months and aged 6 months post disgorgement. This is the entry level wine, but it’s dizzyingly complex. This wine is not ‘about’ fruit, though there is a characteristic Pinot flavor present and an evenness, a steady handedness here. It’s bright and has a directness, a drive that’s full of energy while the underlying soil specific, almost flinty flavor of Verzy is on full display, carrying into the long finish. 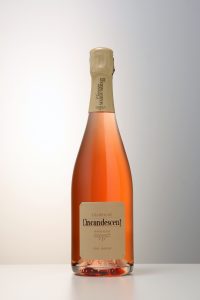 All from the 2014 vintage, this rosé de saignée, made entirely of Pinot Noir was macerated for 18 hours in tank before fermentation in 25% oak and the rest in tank. En tirage for 28 months. This is a wild rosé, recalling Vincent Laval’s Rosé. It’s deep in color and its tone is darker, with broader red fruit character than the Solera wine, but with an intense and quite chalky minerality. It’s a wine for autumn rather than summer and wonderful tertiary notes emerge with time with flavors of cool weather and forest floors. 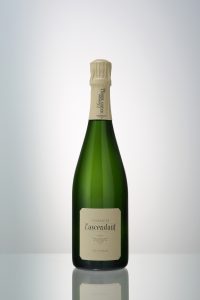 Assemblage is 50% 2013 base Atavique and 50% 2010—2012, 60% Pinot Noir, 40% Chardonnay, vinified entirely in barrel. En tirage for 40 months. This isn’t ‘Atavique+’ in terms of it’s overall flavor. It’s different perhaps deeper, even more complex wine, but not at all heavy and strikingly mineral. It has a slightly more dense and coiled core than Atavique. While the balance here is astounding and the finish long, you get the feeling that the entire wine has yet to reveal itself. 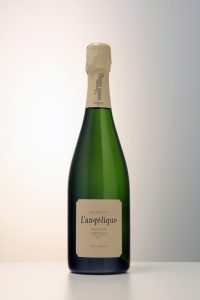 This is the Blanc de Blancs from the 2012 vintage; all Chardonnay and vinified entirely in barrels. En tirage for 56 months. Bright, floral and white, Chardonnay aroma and a pure fleshy fruit which give way to a strong, almost overpowering mineral signature which builds and envelops the fruit almost entirely, finishing with a pure saline and flinty flavor. 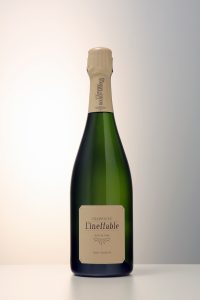 This is the Blanc de Noirs from the 2012 vintage; all Pinot Noir, all in barrels. En tirage for 60 months. The aroma is pure Montagne Pinot! It’s an exhale of red fruit and earth. This is zero dosage and works well in this mode—there is enough gras to carry the fruit through the finish. There is a complex mid palette here, intertwining a woods-y, smoke-y character with a bright bend of fruit giving structure and harmony to the wine. 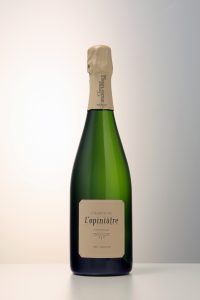 100% Chardonnay from the 2010 vintage, vinified in oak barrels. Zero sulfur, even at harvest. En tirage for 66 months. As noted, this is an ‘opinionated’ wine. It’s intense, darker and smokier in character than Chardonnay normally shows; it’s a different face all together. With time, the fruit emerges, with typical dark cherry and red, but in tandem with a dark saline character. Broad, but not ripe and juicy, this is not a wine for everyone—it’s almost starched, upright and intense.